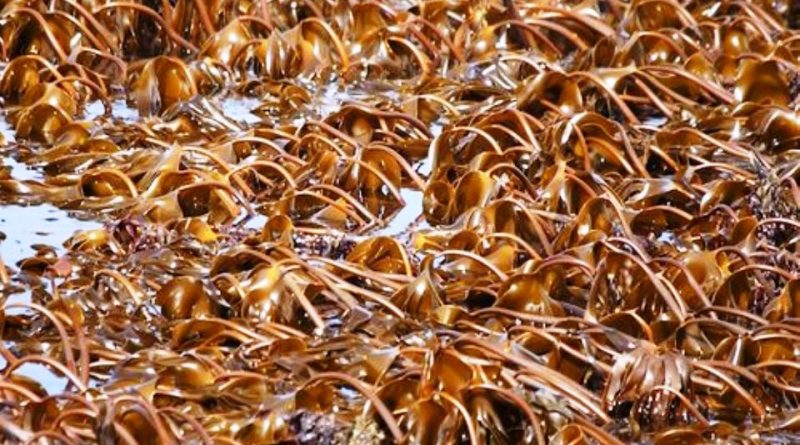 Etymology –
The term Laminaria comes from the Latin Laminaria, derived from lamĭna ‘lamina’, due to its appearance.
The specific cloustoni epithet is of uncertain origin.

Geographic Distribution and Habitat –
Laminaria cloustoni is a brown algae native to the North Atlantic Ocean and the North Pacific.
Laminaria is found in colder ocean waters, such as arctic regions. Preferring to stay in regions where there are rocky coasts, this allows the laminaria to attach itself. Due to the height of the Laminaria, it provides protection for creatures that do not tolerate the open ocean well. Invertebrates are among the organisms that live among algae. Sea snails and other invertebrates feed on the blades (leaves) of the laminaria. Other organisms, such as sea urchins found on the Pacific coast of North America, can decimate algae, including Laminaria, if the urchins are not contained by sea otters. Species such as Coelopa pilipes feed and lay eggs on Laminaria when washed up on beaches. 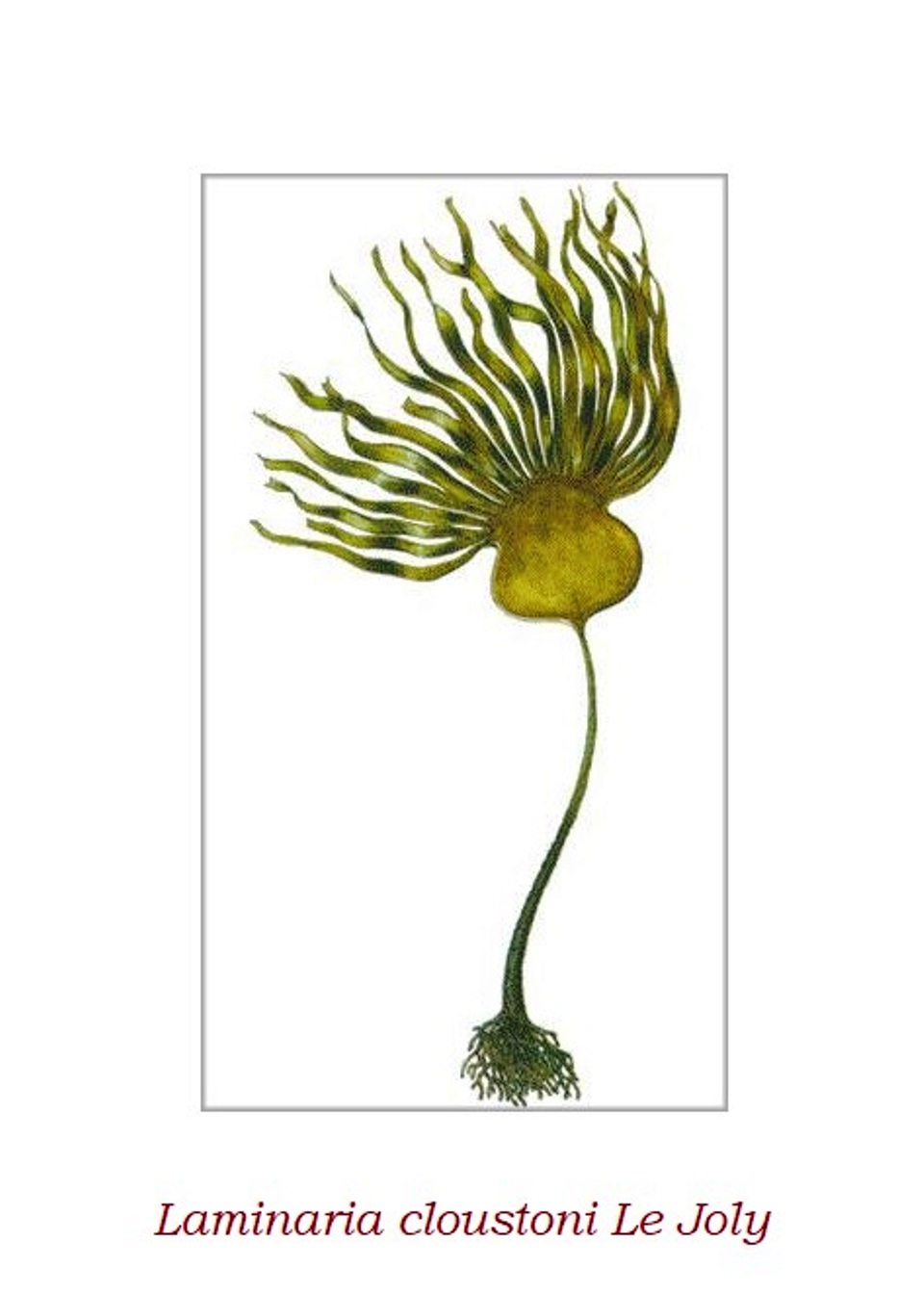 Description –
This alga is characterized by long and leathery leaves of relatively large size.
The life cycle presents a heteromorphic alternation of generations which differs from Fucus. At meiosis, male and female zoospores are produced separately, then germinate into male and female gametophytes. The female egg matures in the oogonium until the male sperm fertilizes it.
The most obvious form of Laminaria is its sporophyte phase, a structure composed of the clip, the stem and the blades. While it spends its time predominantly in the sporophyte phase, it alternates between the sporophyte phase and its microscopic gametophyte phase.

Cultivation –
Laminaria cloustoni like other algae of the same is generally raised with the floating raft method, in which young laminaria sporophytes are attached to submerged ropes. These ropes are then attached to floating rafts.
In 1949, the Chinese began to commercially grow laminaria as a crop. This increased dry weight production to 6,200 tons. Agricultural laminaria is still a major production for China. However, production has declined since the 1980s due to new mariculture technology.

Customs and Traditions –
Algae of the genus Laminaria arrived in China from Hokkaido, Japan in the late 1920s. Once in China, Laminaria were grown on a much larger industrial scale. The rocky shores of Dalian, the northern coast of the Yellow Sea, together with its cold waters have provided excellent growing conditions for these species. Laminaria was harvested for food and produced 40.3 tons of dry weight in 1949.
The thallus of the Laminaria is used in folk medicine to promote mental concentration and reflection, to promote labor and delivery, or for surgical procedures including abortions.
Laminaria is a source of the relatively rare element, iodine, which is commonly used to promote thyroid health.
Some carbohydrates such as mannitol, laminarine and alginate can be extracted from Laminaria.
Mannitol is used to reduce high intraocular pressure and to lower excessive intracranial pressure. Laminarine has two forms, soluble and insoluble. The soluble form of Laminarin has high antitumor activity, can be used in the treatment of antibiotic-resistant nosocomial infections, can help normalize enteric metabolism, helps improve intestinal enzymatic processes and does not possess antigenic or pyrogenic properties. Laminarin continues to be the subject of active study in the medical field today.
Laminaria cloustoni, like other species of the same genus, have been used for food since ancient times wherever man had encountered them.
Also, due to their ability to grow underwater and in salt water, these algae are considered a source of biofuel. Laminaria is one of five macroalgae grown for products such as food, chemicals, and energy. These five genera contribute 76% of the total tonnage for farmed macroalgae. Laminaria is less desired as a renewable energy source due to its high ash content when burned. Laminaria has an ash content of 33%, while wood has an ash content of around 2% when burned. Algae have a high water content which requires a lot of energy to dry before they can be used properly.
Further research is underway on anaerobic digestion, which is the most promising practice for extracting energy from Laminaria. There are still obstacles to overcome before proceeding with anaerobic digestion, such as the cost per kwh.
This alga, along with other brown algae, has the ability to absorb heavy metals, which is why it represents a current area of ​​interest regarding their use to remove heavy metals from wastewater.
Recent research has shown that Laminaria has a favorable mannuronic acid / guluronic acid residue ratio (M / G ratio) for the absorption of heavy metals in its alginate. This M / G ratio is the ratio of L-gluronate (G) to D-mannuronate (M) in alginate, a naturally occurring anionic polymer found in all brown algae. This alginate is capable of forming a gel that contains carboxyl groups that can bind heavy metal cations such as Cu2 +, Cd2 + and Pb2 +, thereby allowing these metals to be removed from wastewater.
Laminaria contains many active and mineral ingredients. Contains trace elements: iodine 0.5% both in inorganic (iodide) and organic protein form, iron salts, potassium, silica, magnesium phosphates, calcium, aluminum, manganese, sulfur, copper, nickel, cobalt; 15-40% alginates formed (depending on the season) from a long chain of D-mannuronic acid and L-guluronic acid; 65% carbohydrates in the form of polysaccharides: alginic acid, alpha-D-glucans, beta-D-glucans, laminerine 15-40%, fucoidin 20% (composed of fucose, methylpentose), xylans, fructans, pectins, mucilages; protides; lipids; vitamins A, B, B1 (thiamin), B2 (riboflavin), B3 (niacin), C, D, E, K (traces); alcohol: mannitol 12-15%; amino acids: lysine, histidine, arginine, glutamic acid and tyrosine.
In general, Laminaria has stimulating properties for the replacement of the endocrine glands, remineralizing, organic rebalancing, stimulating at the circulatory level, antiscrofolose, antigout, cholesterol-lowering, laxative and emollient. It protects the gastrointestinal mucous membranes for the contained algin. It is one of the main sources for the extraction of alginates whose content varies according to the seasons and whose salts have different uses (sodium alginate used as a suspender and emulsifier, aluminum alginate as a protective mucous membrane, calcium alginate, insoluble but swellable); contains polysaccharides with immunostimulating anti-inflammatory activity. It is widely used in cosmetics for alginic acid as a viscosifier, stabilizer of emulsions. For external use it is used as a hemostatic and also used as a fertilizer.

Preparation Method –
The part of the plant of Laminaria cloustoni is the thallus.
Typically, the prepared parts, usually the laminae of the thallus, are consumed immediately after boiling in broth or water, or consumed after drying. Most commercial cultivation is to produce alginates, iodine and mannitol, which are used in a wide range of industrial applications. In South Korea it is made into a sweet known as laminaria jelly, in other countries it is also used in the form of fresh salad, which is also canned for delivery and sale in other regions. Many countries produce and consume Lminaria products, the largest of which is China.