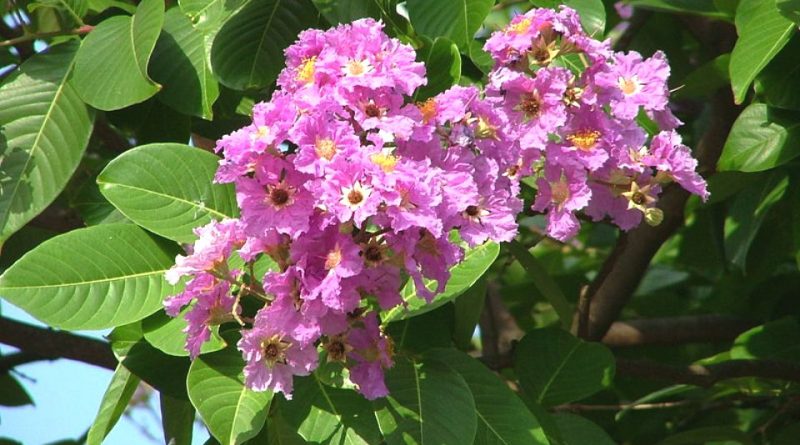 The Pride of India or Banabá (Lagerstroemia speciosa (L.) Pers., 1806) is an arboreal species belonging to the Lythraceae family.

Etymology –
The Lagerstroemia term of the genus was dedicated to
The Lagerstroemia genus was first described by Charles Linnaeus. The name Lagerstroemia recognizes Magnus Lagerstroem (1691-1759), a Swedish naturalist who became one of Linnaeus’ main suppliers of plants and animals from the Far East.
The specific speciosa epithet comes from spécies beauty: good-looking, showy, elegant

Geographic Distribution and Habitat –
Lagerstroemia speciosa is a plant native to tropical Asia: China, India, Cambodia, Burma, Thailand, Vietnam, Indonesia, Malaysia and the Philippines.
This plant is used as an ornamental tree and is grown all over the world.
Its habitat is in areas with open vegetation, often in coastal areas, in regrowths or in swamps, even at altitudes up to 400 meters. Usually on alluvial sites and along rivers with sandy to clayey soils. 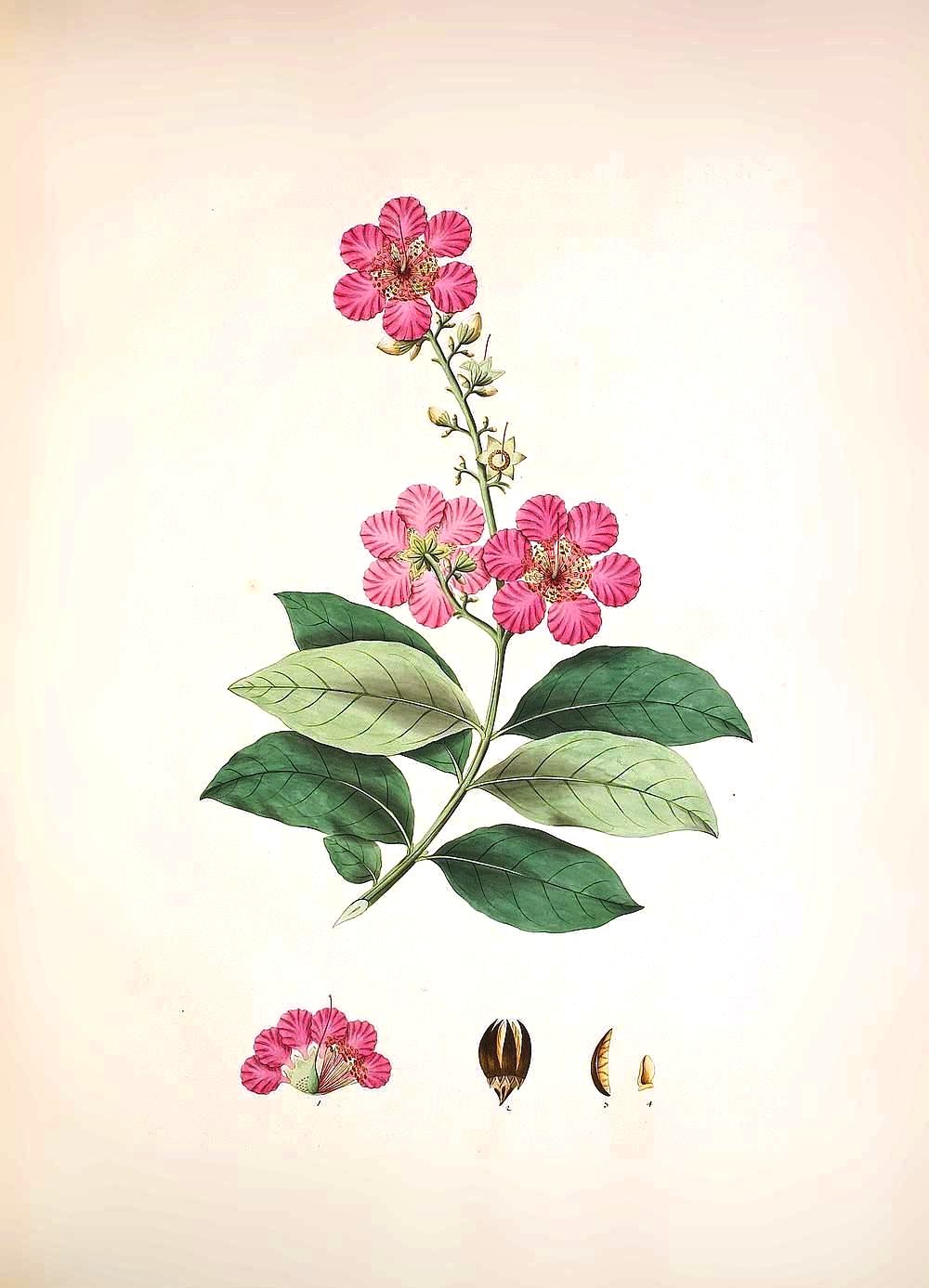 Description –
Lagerstroemia speciosa is a small and medium-sized, deciduous tree that grows up to 20 meters (and even more) in height, with smooth and scaly bark and with an erect and round crown.
It is a fast growing tree that produces suckers.
The leaves are deciduous, oval to elliptical in shape, 8-15 cm long and 3-7 cm broad, with an acute apex.
The flowers are carried in erect panicles 20-40 cm long; each flower has six petals which are white to purple and 2-3.5 cm long.
The flowers of this plant only bloom once a year at the height of summer.

Cultivation –
Lagerstroemia speciosa is a plant grown in Southeast Asia, India, Bangladesh and the Philippines. It is also widely grown as an ornamental plant in tropical and subtropical areas.
The leaves and other parts of this plant are widely used in the Philippines, Taiwan and Japan as a tea preparation.
It is a plant of the humid and lowland tropics and subtropics, where it is found at altitudes up to 400 meters. It grows best in areas where annual daytime temperatures are between 18 and 35 ° C but can tolerate 6 – 43 ° C.
The plant, when dormant, can survive temperatures as low as around -2 ° C but young plants can be severely damaged at -1 ° C.
It prefers an average annual rainfall in the range 2,000 – 3,500 mm but tolerates 1,300 – 5,000 mm.
It thrives in full sun location on a wide range of moist, well-drained soils although it grows best on rich, deep, alluvial clay soils with good drainage, but can also grow in poorly draining marshy soils. It tolerates alkaline soils, but not saline conditions and prefers a pH in the range 5.5 – 6.5, tolerating 4.5 – 7.5.
The tree has been successfully grown in urban areas where air pollution, poor drainage, firm soil, and / or drought are common.
It is a tree that appreciates regular fertilization or, otherwise, the leaves tend to become chlorotic.
Young seedlings grow very slowly for the first year, but then accelerate. Three-year-old plants, grown on fertile and irrigated soil, reached a height of 3 meters; without irrigation they were 2.4 meters high.
In the trials in Java, 15-year-old trees achieved an average annual increase of 9-11 mm in diameter and 70-90 cm in height.
In trials at planting distances of 3 meters x 1 meter on fertile soil in Java the canopy closed after 6 years and the first thinning was necessary after 8 years.
The coppice is quite resistant to fire.
The seedlings can flower when they are only 2 years old and it is a plant that should tolerate storms well, having a hard wood with flexible branches; provided they are well spaced along the trunk and not clustered together growing from a point on the trunk.
The tree tends to grow with more trunks and for this reason it must be governed since it is young.
Propagation occurs easily by seed and the seeds must be sown in the shade; germination takes 15 – 56 days. After germination, the small seedlings can be transferred to containers. Seedlings grow slowly, often not exceeding 5 – 30 cm in height at the end of the first year – they usually accelerate somewhat after this period.
The seeds can be stored for at least 2 years in airtight containers at room temperature.
Other methods of propagation include that by cuttings or by division of root suckers.

Customs and Traditions –
Lagerstroemia speciosa is harvested in its natural state for local use as a medicine and source of materials.
It has good quality wood, considered one of the best lumber trees in Myanmar and Assam, and is often marketed. It is also one of the most striking flowering trees and gives good shade; it is commonly grown in gardens or along roadsides for its brightly colored mauve or pink flowers with ruffled petals.
This plant is used as a medicine.
The seeds are narcotic and the leaves are purgative.
Banabá herb is one of 69 herbaceous plants promoted by the Philippine Department of Health (DOH). In Vietnam, the young leaves of the plant are consumed as vegetables, while the old leaves and ripe fruits are used in traditional medicine to reduce blood glucose.
Chemical compounds that have been isolated from the extract include corosolic acid, lager-stroemin, flosin B and reginine A.
Lagerstroemia speciosa is recognized as the official state flower of Maharashtra in India.
In Theravada Buddhism, this plant is said to have been used as a tree for attained enlightenment, or Bodhi by the eleventh Buddha (“Paduma – පදුම”) and the twelfth Buddha (Naarada – නාරද). The plant is known as මුරුත (Murutha) in Sinhala and Mahaasona – මහාසොණ in Sanskrit.
Among the known dangers it should be remembered that the roots, stems and leaves contain hydrogen cyanide.
In addition to ornamental and medicinal uses, this plant is used in other sectors.
The tree has a dense and broad root system, which has made it useful in plantations for controlling soil erosion.
It was used in reforestation schemes for degraded hills in Java.
The tree is also used as a support for rattan canes.
Among other uses, it should be remembered that the bark, the fruit (14 – 17%) and the leaves (12 – 13%) all contain tannin, furthermore a yellow dye is obtained from the bark.
The seeds produce an oil whose main constituents are linoleic (54.3%), a keto (9-ketooctadec-cis-11-enoic, 21.1%), oleic (10.3%), palmitic (9.7 %) and stearic acid (4.6%).
The heartwood is variable, from light brown, yellow-brown, greyish or reddish to red-brown color; it is not clearly differentiated from the up to 8 cm wide band of the sapwood which is white or gray-white or yellow-brown in color. The texture is moderately fine to coarse and irregular due to the formation of ring pores; the grain is straight, intertwined or sometimes wavy; the surface is quite shiny. The wood is moderately heavy; difficult; quite durable, being resistant to termites, moderately resistant to fungi but susceptible to woodworms.
It is a wood that ages a little slowly, with a slight risk of sagging or distortion; once dried, in service, it is moderately to slightly stable.
It reacts well to working with ordinary tools, although the wavy grain can cause problems in planing and leave blurred surfaces if the tools are not very sharp; good to be nailed and screwed; gluing is correct. Wood is suitable for undercover use, being suitable for purposes such as interior finishing, paneling, veneer and veneer, high-class furniture making, carving and home flooring. It is said to be popular for use in boat building in Thailand and parts of the regions of Indochina.
Furthermore, wood is also used as a fuel.

Preparation Method –
Lagerstroemia speciosa is a plant that, mainly, in addition to ornamental purposes and the use of wood, is used in the medicinal field.
A dried leaf preparation known as banaba is used widely in the Philippines to treat diabetes and urinary problems.
A foliar poultice is used to relieve malarial fever and is also applied to cracked feet.
A decoction of the bark is used as a treatment for diarrhea and abdominal pain.