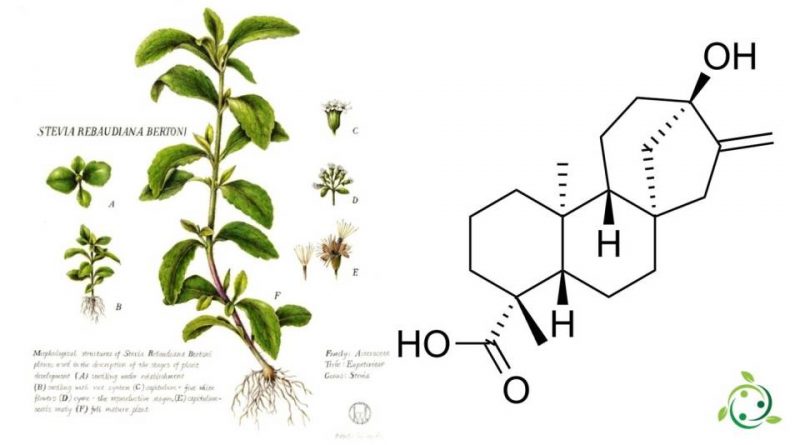 Steviol, whose term in the official IUPAC nomenclature is: acid (4R, 4aS, 6aR, 9S, 11aR, 11bS) -9-hydroxy-4,11b-dimethyl-8-methylidenetetradecahydro-6a, 9-methanocyclohepta [a] naphthalen -4-carboxylic is a diterpene with a brute or molecular chemical formula: C20H30O3.
Steviol is a diterpene isolated for the first time from the stevia plant (Stevia rebaudiana Bertoni) in 1931. It is a substance whose chemical structure was completely elucidated in 1960.
Steviol is found in the plant in the form of steviol glycosides, sweet compounds that have found widespread use as sugar substitutes.
In Stevia rebaudiana, the biosynthesis of steviol is confined to green tissues. The precursors of steviol are synthesized in plant cell plastids, which produces isopentenyl pyrophosphate (IPP) and dimethylallyl pyrophosphate (DMAPP). IPP and DMAPP are converted into geranylgeranyl diphosphate (GGDP), which is the precursor of many diterpenoids, by GGDP synthase. GPDP is transformed into a cyclic compound, copalyl diphosphate (CDP), by CDP synthase, after which kaurene is produced by another cyclization catalyzed by kaurene synthase.

The kaurene is then transferred to the endoplasmic reticulum, where it is oxidized to kaurenoic acid, by kaurene oxidase, in a reaction that consumes oxygen and NADPH. Then steviol is produced by hydroxylation. Steviol is subsequently glycosylated in the cytoplasm.
Steviol is a recognized mutagen. However, according to some research, in populations that use stevia leaves and derivatives, including Japan, there is no marked statistical evidence of tumors attributable to steviol. An in vivo study by the University of Berkeley would confirm these statistics.