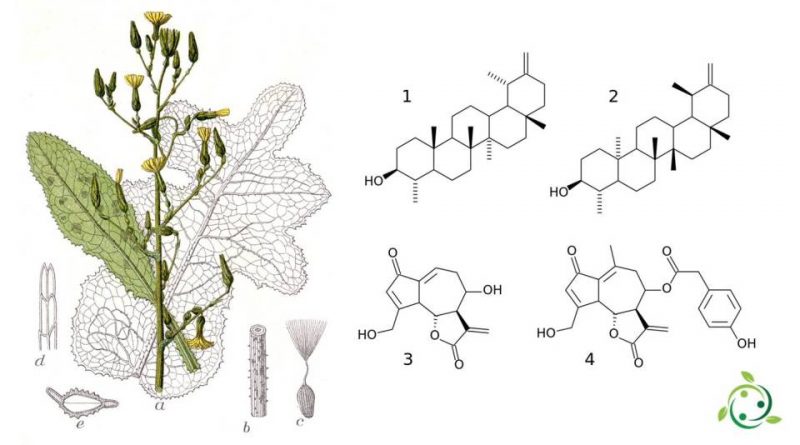 Lactucarium is the milky liquid secreted by several species of lettuce, particularly in wild lettuce (Lactuca virosa L.), usually from the base of the stems. It is known as lettuce opium due to its alleged sedative and analgesic properties. It has also been reported to promote a mild feeling of euphoria.
Because it is a latex, lactucarium physically resembles opium in that it is excreted as a white fluid and can be reduced to a smokable thick solid.
This substance was used by the ancient Egyptians, and was introduced as a drug in the United States as early as 1799, as a weaker but side-effect-free alternative to opium, and in some cases preferable. However, the first attempts to isolate an active alkaloid were unsuccessful.
Lactucarium was described and standardized in the United States Pharmacopoeia of 1898 and the British Pharmaceutical Codex of 1911 for use in tablets, tinctures and syrups as a sedative for irritable cough or as a mild hypnotic (sleep aid) for the insomnia.
The standard definition of lactucarium in these codices required its production to come from Lactuca virosa, but it was recognized that smaller quantities of lactucarium could be produced similarly by Lactuca sativa and Lactuca canadensis var. elongata and also from other species.
In the twentieth century, however, two major studies found that commercial lactucarium had no effect. In 1944, Fulton concluded, “modern medicine considers its sleep-producing qualities a superstition, its therapeutic action dubious or nil.” Another study from the time identified the bitter active ingredients lactucin and lactucopicrin, but noted that these fresh latex compounds were unstable and did not remain in commercial lactucarium preparations. As a result this substance fell out of use until hippie movement publications began promoting it in the mid-1970s as a legal drug that produces euphoria.

More recent work has confirmed that lactucin and lactucopicrin have analgesic and sedative properties.
It should be remembered that lettuce seeds have been listed as anesthetics in the Avicenna Canon of Medicine, which has been an authoritative text on medical medicine since 1000 AD. until the seventeenth century.
Nowadays, although the lactucarium has disappeared from general use as a pain reliever, it remains available, sometimes proposed as a legal psychotropic.
The seed of lettuce (Lactuca sativa L.) is still used in Iran in folk medicine.
The chemical compounds found in lettuce are: α-lattucerol (taraxasterol), β-lattucerol (lactucone, lactucerin), lactucin and lactucopicrin.
Lactucin and lactucopicrin were found to have analgesic effects comparable to those of ibuprofen and sedative activity in measurements of spontaneous movements of mice.
Some effects were also attributed to a trace of hyoscyamine present in Lactuca virosa, but the alkaloid was not detectable in the standard lactucarium.
A crude seed extract was shown to have analgesic and anti-inflammatory effects in standard formalin and carrageenan tests on laboratory rats. It was not toxic to rats at a dose of 6 grams per kilogram.
One of the compounds, lactucin, is an adenosine receptor agonist in vitro, while another, lactucopicrin, has been shown to act as an acetylcholinesterase inhibitor in vitro.