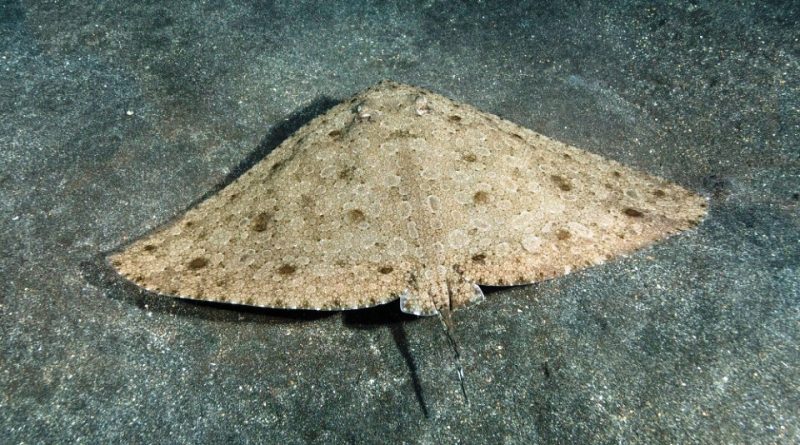 The Spiny butterfly ray (Gymnura altavela, Linnaeus, 1758) is a fish belonging to the Gymnuridae family.

Geographic Distribution and Habitat –
The Spiny butterfly ray is a species with an irregular and discontinuous distribution in tropical and temperate-warm Atlantic waters. In the western Atlantic it is found from Massachusetts, United States, to the province of Buenos Aires, Argentina; it is rare in the Gulf of Mexico and common in the mouths of tidal streams along the coast of Virginia. In the eastern Atlantic, it is found from Portugal to Ambriz, Angola, including the Mediterranean Sea, the Black Sea, Madeira and the Canary Islands.
In the Mediterranean, its presence was once reported throughout the basin, including the Black Sea, while today it is restricted to the southern basin.
In the Italian seas it is reported in Liguria, Lazio, Naples and Sicily, but rare everywhere. Very rare in the Adriatic.
Its habitat is that of brackish and shallow coastal waters on sandy or muddy substrates, at a depth of 5-100 m.
It is a range that is rare overall but can be locally abundant in suitable habitats.
Individuals can be sex-segregated, with females usually staying in deeper water but moving to the coast to reproduce. 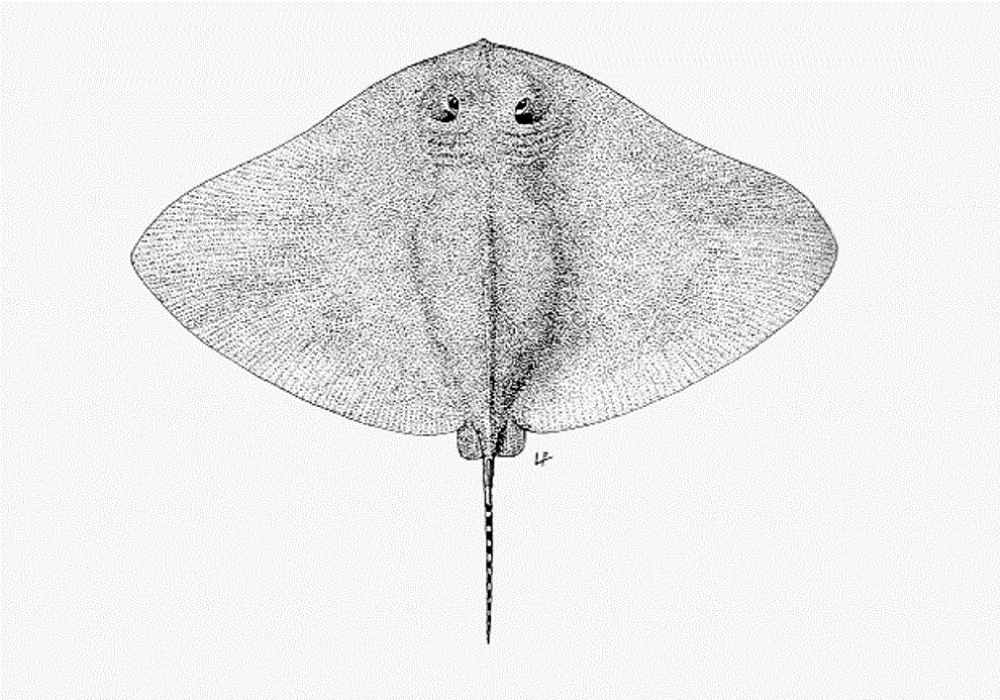 Description –
The Gymnura altavela is a fish that is recognized for the great development of its wings. The disk is very large (more than double its height) in the shape of a rhombus. The anterior margins are slightly sinuous in adults and more so in the young, while the posterior ones are almost straight; the apexes are rounded. The rostrum is not very pronounced and slightly protruding. The skin is completely smooth, except in young people.
It has a small, narrow and almost straight mouth, with a flap of skin on the upper jaw. The teeth are small, with pointed cusps and arranged in series. In the upper jaw there are 98-138 teeth in series and in the lower jaw 78-110. There are 10-12 rows of functional teeth in both jaws.
Spiracles of the tentacular processes directed backwards depart from the posterior inner margin.
This fish has no dorsal, anal and caudal fins. The pelvic fins are quadrangular with a rounded outer corner. The tail is relatively short (about a quarter the length of the disc) and thin, dorsally-ventrally depressed; on the dorsal part, near the base, it has 1-2 strong serrated spines. The dorsal and ventral folds are very low and extend along the entire length of the tail.
The back varies from sand gray to more or less dark brown, marbled by dark and light spots and ocellar spots with not very defined contours. The ventral side is pure white (sometimes cream or slightly pink) and so is the ventral part of the tail.

Biology –
Gymnura altavela is an ovoviviparous species without placenta: the eggs hatch inside the uterus, where embryonic development continues, during which the sustenance is provided directly by the components of the intrauterine fluid.
The reproduction takes place once a year, and after a gestation of about 6 (9) months gives birth to 2-7 embryos, which at the end of their uterine development are already equipped with the tail spine and measure between 38 and 44 cm. Females mature later than males.

Ecological Role –
The Gymnura altavela is a benthic species that lives on sandy and muddy bottoms, from 5 (2) to 100 (60) m. this fish swims very fast beating its large pectorals. The dorsal and ventral fins are very low.
In the western Atlantic it feeds on fish, including Leiognathus and small sharks, and squid. Off the coast of Tunisia, it feeds on crustaceans, teleosts, cephalopods, lamellibranchs and gastropods, in decreasing order of importance. Teleost fish appear to become more important in the breed’s diet as they increase in size. An active predator, it slowly approaches prey before quickly turning over it and striking it with the front edge of one of its pectoral fins. This behavior probably serves to stun the prey before capture, as the pectoral fins of this fish contain a high percentage of red muscles and can deliver blows with considerable force.
The Gymnura altavela, in turn, is prey to other species. Potential predators include larger fish such as the great hammerhead (Sphyrna mokarran) and marine mammals. In the Northwest Atlantic, the depletion of seven large shark species by commercial fishing has led to an increase in the population of the high-sail Gymnura and other mid-level predators.
Known parasites of this species include tapeworms Anthobothrium altavelae and Pterobothrioides petterae and the branchial parasite Heteronchocotyle gymnurae.
The meats of the Gymnura altavela are edible, appreciated only locally. It is mainly fished in the southern areas of the Mediterranean and on the coasts of Brazil. Although not an easily adaptable species to life in captivity, it has been managed to make it settle in some large aquariums.
It reaches 60 kg and 4 m as the maximum width of the disc and 2.85 m as a total length (commonly it is between 100 and 200 cm); in the Italian seas it reaches widths of 80/100 cm. Mature females are usually larger than males. Normally they are not dangerous for humans, but the prick of its thorns is very painful.
It usually frequents sandy or muddy bottoms, where it can protect itself more easily, burying itself and leaving only the eyes and the two spiracles protruding. The characteristic imprint left by the body can also be observed long after its displacement. Despite the presence of poisonous thorns, it is not considered dangerous for humans.
As far as its conservation status is concerned, the low reproduction rate and the pressure due to fishing have significantly affected this species, which has been included in the IUCN list of vulnerable species (VU). In particular throughout the Mediterranean and in Brazil, where it was once reported frequently, it has become decidedly rare, so much so that its local status has been elevated to critical (CR).