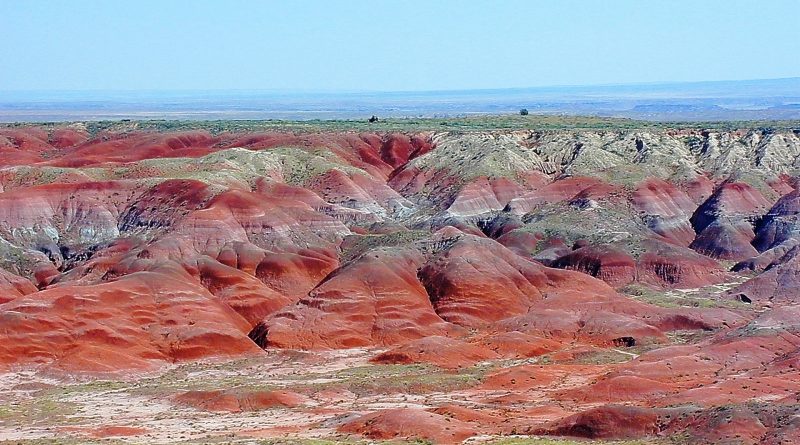 Petrified Forest National Park is a national park located in Arizona, in the United States of America.
This park, whose WDPA Code is: 993, covers 600 square kilometers and includes semi-desert shrub steppes and highly eroded and colorful badlands.
Petrified Forest National Park was established in 1962 and, like other parks in the United States, is managed by the National Park Service.
The Petrified Forest National Park is named for its large deposits of fossil trunks dating back to the Upper Triassic (about 225 million years ago).
At that time, the region was located near the equator on the southwestern edge of Pangea. What later became northeastern Arizona was a plain flanked by mountains to the south and the sea to the west. Rivers that flowed across the plain from the highlands deposited inorganic sediments and organic matter, including trees that accidentally fell into the water, which accumulated in river channels were buried by sediments containing volcanic ash. The groundwater dissolved the silica from the ash and transferred it to the trunks, where it formed quartz crystals that gradually replaced the organic matter, returning kaleidoscopic structures with very bright colors.
The area north of the park is also called Painted Desert, name given by the first explorers who ventured here: from the elevated observation points of the park you can admire a boundless panorama on a landscape that has no equal in nature.
Characteristic of this area is the color due to the traces of iron oxide and other substances combined with silica that animate the petrified wood with a rainbow of colors ranging from yellow to blue to red to gray. 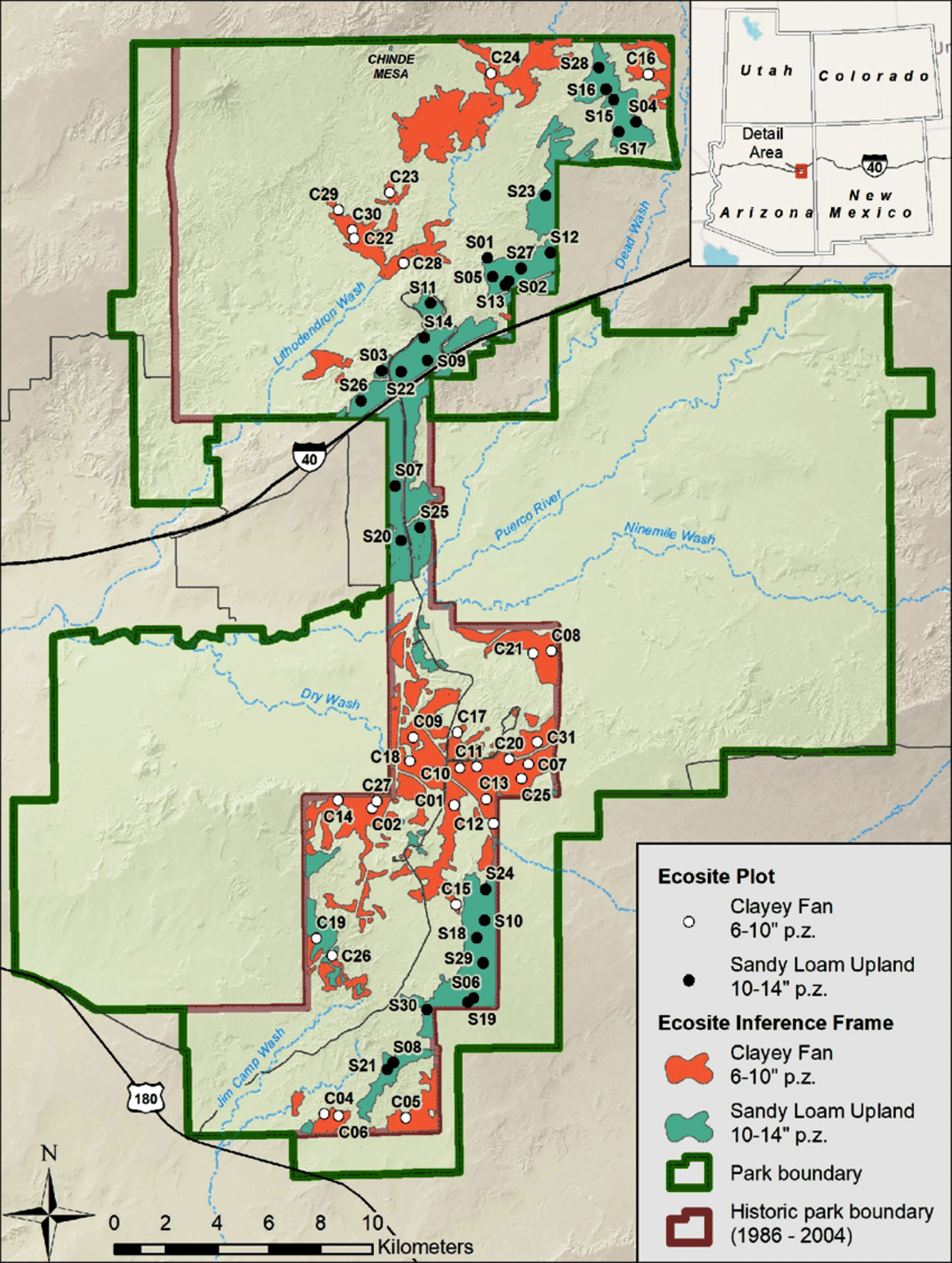 Flora –
Of course, not all plants in the Petrified Forest National Park are fossils. Living plants are key components within the grassland ecosystem found throughout the park. Plants capture particulate matter in the air, filter gaseous pollutants, convert carbon dioxide into oxygen, provide habitat for animals and provide raw materials for humans.
The plants of this park, like all those of arid climates, have adaptations that allow them to survive extreme temperatures and rainfall. These adaptations can be grouped into two basic categories, plants that escape drought and plants that resist drought.
Plants that flee drought are plants that take advantage of favorable growing conditions when they exist, but hibernate when those conditions disappear. They are usually annuals, only growing when enough water is available. Seeds produced in good conditions can lie dormant for years if conditions are not conducive to germination. Most of the grasses and wildflowers have escaped drought.
Plants that resist drought are typically perennial. They have mechanisms to reduce the damage that drought can cause. For example, some will drop their leaves if water isn’t available. Many have small, hairy leaves that reduce exposure to drafts and solar radiation and therefore limit the amount of water lost through evaporation.
Cacti, yuccas and mosses are examples of drought tolerant. Yuccas have extensive fictitious roots that can reach water beyond the capacity of other plants. Mosses can tolerate complete dehydration. When the rains return after long periods of drought, the mosses immediately green.

Fauna –
The animal life of the Petrified Forest includes amphibians, birds, insects, spiders, mammals and reptiles. Birds, lizards, and rabbits are seen more frequently, although seasons and weather play an important role in determining which animals are active.
For many animals, activity occurs during a particular temperature range. Crepuscular animals are active at dawn and dusk, the coolest hours of the day. Dim light makes prey animals less visible, but visibility is good enough to spot food.
The activity can also change with the season. Snakes and lizards are diurnal (active during the day) in late spring and early autumn, but become crepuscular during the summer heat.
Many animals in the park are nocturnal (active at night). This is an adaptation not only to avoid the high summer daytime temperatures, but also to avoid some predators.
You are much more likely to catch a glimpse of animal life in the park if you come as soon as the park hours allow and stay late. These are also the times when the angle of the sun makes the views and colors of the Painted Desert more spectacular.
Also, whenever you are in a national park, you shouldn’t approach, feed or harass the wildlife.