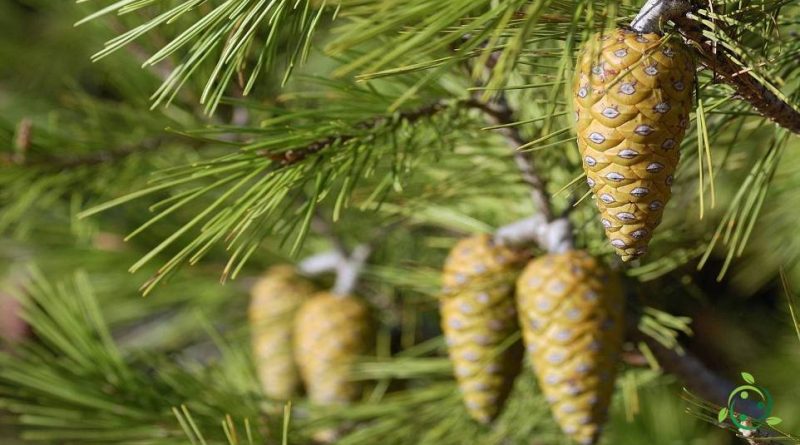 The Aleppo pine (Pinus halepensis, Mill. 1768) is a species of pine native to the Mediterranean area in an area ranging from the Iberian Peninsula and Morocco to Lebanon and Syria. Along the coasts of Italy the pine forests of Pino d’Aleppo are very frequent, rich in Mediterranean scrub.
The reproductive structures of this plant are:
– male cones that are located at the base of the shoots and are oblong, numerous, small and yellow;
– female cones which are first rounded and then conical, after three years, when ripe, assuming a translucent reddish-brown color. Very numerous, they have a short peduncle facing downwards. The scales have a slightly protruding and rounded apophysis; the seeds are blackish and have an elongated wing.

Cultivation –
For the cultivation of Pinus halepensis it is good to choose a sunny position even if being a rustic and resistant variety, it grows without problems even in partial shade; furthermore, the young specimens should be shaded in the hottest periods of the year.
This plant does not tolerate harsh winters very well, preferring mild winters; for this reason the young specimens, which are more delicate, should be sheltered in winter and watered at least every 2-3 weeks in summer.
For young seedlings, in the period from late spring to autumn, the soil must be kept with a certain humidity, so as to avoid suffering for the plants.
However, it is necessary to avoid water stagnation, which could cause damage to specimens of this genus.
As for the substratum, Pinus halepensis prefers rich, loose and well-drained soils, where it develops in a rich and vigorous way; however, it should be noted that this plant, however, usually grows in arid places, with rocky and very poor soils, where it survives and grows quite well, given its rusticity and great adaptability to unfavorable soils.
The Aleppo pine propagates by seed in spring. Very delicate seedlings are obtained from the seed which must be kept in a container for a few years before being planted; before carrying out the transplant, you must wait until the seedlings are well formed, taking care in picking and transplanting not to damage the root system.