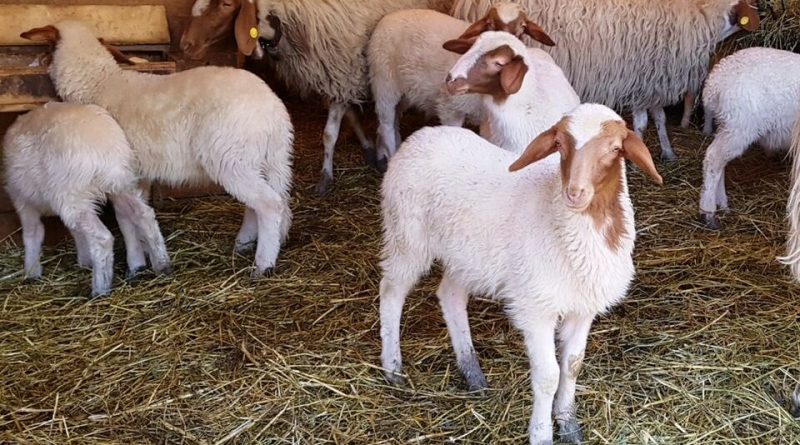 The Comisana is a sheep breed (Ovis aries Linnaeus, 1758) originally from Sicily with an aptitude for milk production.

Geographic and Area Distribution –
The comisana is a very widespread dairy sheep breed and bred for its excellent and qualitative milk production. This breed is native to Sicily but also finds a lot of diffusion in the farms of the neighboring regions. The areas of greatest breeding are: Sicily, Lombardy, Piedmont and central and southern Italy.
In Sicily, mainly purebred animals are bred, in the rest of Italy the Comisani rams have served to improve the native breeds (for example, in Calabria with the gentle breed of sheep of Puglia, a Calabrian stock).

Origins and History –
The Comisana, also known as “red face”, “red head” or “Lentinese”, is a sheep originally from Sicily, more precisely from the Municipality of Comiso (RG), from which it derives its name and widespread above all in the province of Ragusa and Syracuse. This breed derives from crosses between native Sicilian sheep and different breeds from the Mediterranean. However, the most accredited hypothesis is that it derives from the Maltese breed of sheep, from which it would have inherited its remarkable dairy aptitude.
With genetic selection, the definitive characteristics were then fixed at the beginning of the twentieth century, then seeing the spread of the Comisana sheep in the areas of the plain of Caltanissetta and Agrigento “in purity”, crossed with the local sheep in the province of Enna and Palermo and crossed with the Sardinian breed in the province of Trapani. In general, mass selection has always aimed at milk production.
Moreover, thanks to the breed crossings carried out and the continuous genetic selection, this comisana has reached a high versatility and adaptability to intensive or semi-intensive breeding, although tradition sees the Comisana sheep bred in the wild, being a rustic breed in able to enhance the meager pastures that grow on the Iblei mountains.
The Comisane sheep, together with the Sardinian sheep, have colonized, in the past years, most of the Italian regions, even in territories very different from the original ones. The reason for this success, in particular of the comisana, is given by the great ability to produce high quality milk, even in extreme conditions.

Morphology –
The distinctive somatic feature of the Comisana breed is the red facial mask that extends to the ears and neck. The head can be totally red or outlined by a white front band. The limbs are also red.
It is a medium-large breed with an average height at the withers of 80 cm for males and 70 cm for females. The weight is 80 kg for males and 50 kg for females.
It has a large and long horned head with a sheepskin profile and long, wide and drooping ears.
The trunk is long, the chest broad and prominent, the chest broad, the back straight.
It has long and robust loins and a voluminous belly with long and robust limbs.
Females have large breasts with a broad base of attachment and the skin is fine and greasy. It has a not excessively developed median groove with harmonically developed nipples.
This sheep has a white, extended fleece, excluding the lower abdomen and lower tarsus of the limbs and is semi-closed or semi-open type; the blocks are cylindrical-conical.
Skin: pink, greasy, clear nails.