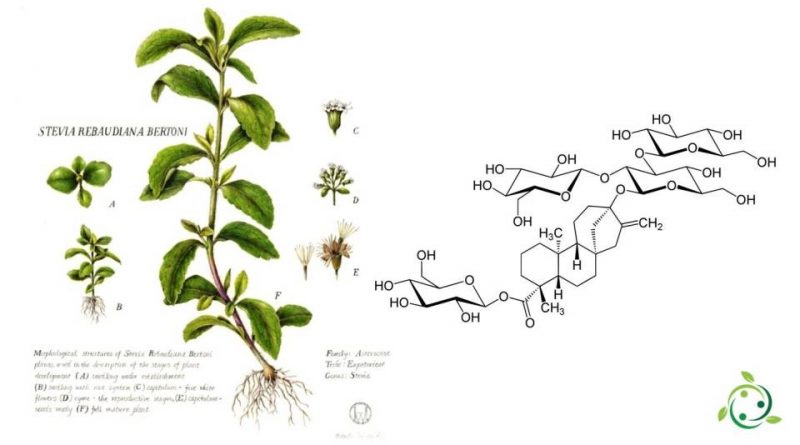 Rebaudioside A is a steviol glycoside contained in the leaves of the Stevia plant (Stevia rebaudiana Bertoni).
Rebaudioside A, whose term in the official IUPAC nomenclature is: 19-O-beta-glucopyranosyl-13-O- (beta-glucopyranosyl (1-2) beta-glucopyranosyl (1-3)) – beta-glucopyranosylsteviol has a brute formula or molecular: C44H70O23.
Rebaudioside A (sometimes abbreviated to “Reb A”) is 240 times sweeter than sugar.
Stevia leaves contain 9.1% stevioside and 3.8% rebaudioside A.
The glycoside contains only glucose (excluding other commonly found monosaccharides) as its monosaccharide parts. In total it contains four glucose molecules, with the central triplet glucose attached to the main steviol structure to its hydroxyl group and the remaining glucose to its carboxyl group forming an ester bond.
It should be remembered that, even if one of its potential metabolites, steviol, is a recognized mutagen, rebaudioside A itself does not show any carcinogenic effect. It is also unknown whether this metabolite is actually absorbed during metabolism in vivo. It is usually present together with its isomer, rebaudioside C (CAS 63550-99-2).

It has been seen that the 4 β-glucoses contained in the molecule, in some in vitro studies, are hydrolyzed and removed by the human intestinal bacterial flora, producing steviol. However, in populations that naturally use stevia leaves and derivatives, including Japan, there is no marked statistical evidence of tumors attributable to steviol.