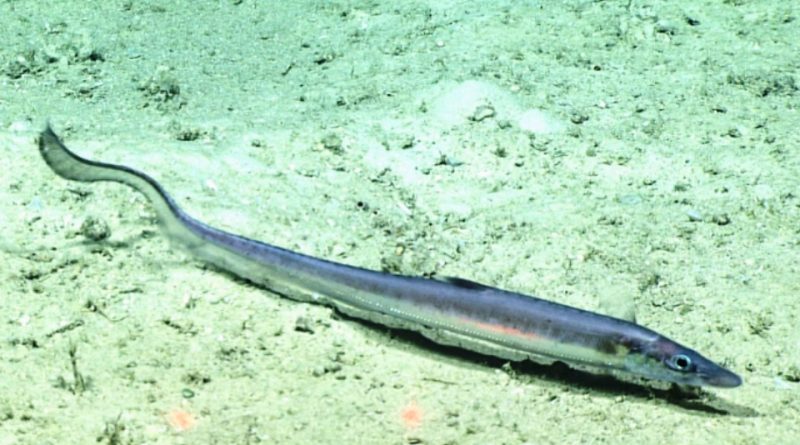 Geographic Distribution and Habitat –
The alosaurus is a species present in both the eastern and western Atlantic Ocean, limited to the tropical and subtropical areas. Two reports are known in the Mediterranean Sea, one in 1963 in Algeria and the other in 1979 in southern Sardinia.
Its habitat is that of the abyssal beds where it lives along the continental slope, usually at a depth between 440 and 1600 meters.

Description –
Halosaurus owenii has an eel-like body that tapers to a point, up to the terminal part without the caudal fin, with a length of up to 60 cm and a height of 1/13 – 1/17 of the total length.
Its body is entirely covered with cycloid scales, including the upper part and sides of the head (1/8 of the total length), up to the muzzle and the opercula.
The scales along the lateral line are larger than the others and are not pigmented. On the lateral line there are 59-68 pre-anal scales.
The mouth is lower and the muzzle extends beyond the tip of the lower jaw. The anal fin (150-190 rays) is elongated and extends along the posterior half of the body.
The dorsal fin, with 1 spiny ray and 8-9 soft, is short and implanted just before the middle of the body.
The pelvic fins are short with 1 spiny ray and 7-9 soft.
The pectoral fins are slender and elongated, with 1 spiny ray and 13-16 soft. 10-12 spines on the first arch.
The swim bladder is absent.
This fish has a dirty pink color with metallic sheen, darker on its upper half. The inside of the mouth has characteristic light areas and two dark stripes, one on each side, of the lower jaw. Gill cavity, palatine and anterior part of the tongue are dark.
Males have enlarged and dark colored nostrils. The larvae are leptocephalic.

Biology –
The biology of Halosaurus owenii, also due to its habitat in deep waters, is almost unknown. This species is in fact a benthopelagic species that frequents depths of 400-1700 m (normally less than 800 m) and is probably gregarious. Once the eggs are laid, they develop into leptocephalic larvae.

Ecological Role –
The Oven’s halosaur feeds on benthic animals (worms, molluscs, crustaceans) and carcasses of dead fish. It has no particular value from an economic point of view and is sometimes caught, by chance, with trawl nets.