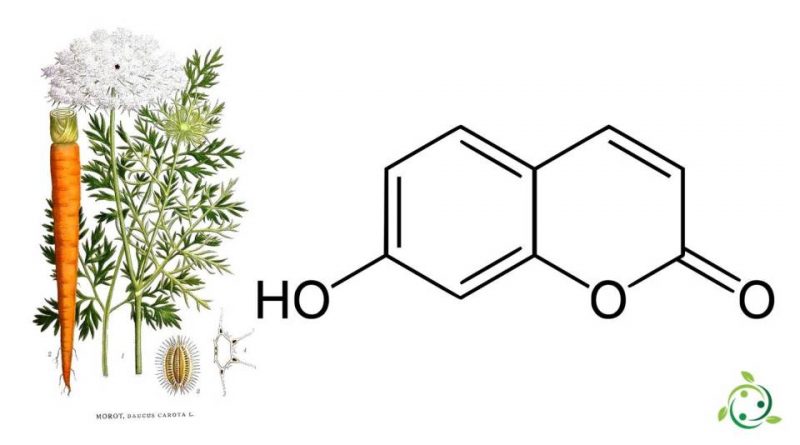 Umbelliferone whose term in the official IUPAC nomenclature is: 7-hydroxy-2H-1-benzopyran-2-one is a natural organic substance (phenylpropanoid) belonging to the coumarin family, present in particular in plants of the Apiaceae family.
This compound, also known as 7-hydroxycoumarin, has a brute or molecular formula: C9H6O3.
Umbelliferone is found in many plants of the Apiaceae family such as carrot, coriander and garden angelica, as well as in plants of other families, such as pilosella (Hieracium pilosella) or broadleaf hydrangea (Hydrangea).
Umbelliferone is also one of the components of asafoetida, the dried latex of giant fennel (Ferula communis) and is also found in Justicia pectoralis.
Umbelliferone, as such, is synthesized from L-phenylalanine, which in turn is produced via the shikimate pathway. Phenylalanine is lysed into cinnamic acid, followed by hydroxylation by cinnamate 4-hydroxylase to produce 4-coumaric acid. The 4-coumaric acid is again hydroxylated by cinnamate / coumarate 2-hydroxylase to produce 2,4-dihydroxy-cinnamic acid (umbellic acid) followed by a rotation of the unsaturated bond adjacent to the carboxylic acid group. Finally, an intramolecular attack from the C2 ‘hydroxyl group to the carboxylic acid group closes the ring and forms the umbelliferone lactone.

Umbelliferone is a substance with particular ultraviolet activity; this feature has led to its use as a sunscreen and optical whitening agent for fabrics. It has also been used as a gain medium for dye lasers. Umbelliferone can be used as a fluorescence indicator for metal ions such as copper and calcium. Acts as a pH indicator in the range of 6.5-8.9.
Umbelliferone is a potent inhibitor of 17β-hydroxysteroid dehydrogenase type 3, the primary enzyme responsible for the conversion of 4-androstene-3,17-dione to testosterone, with an IC50 of 1.4 μM.