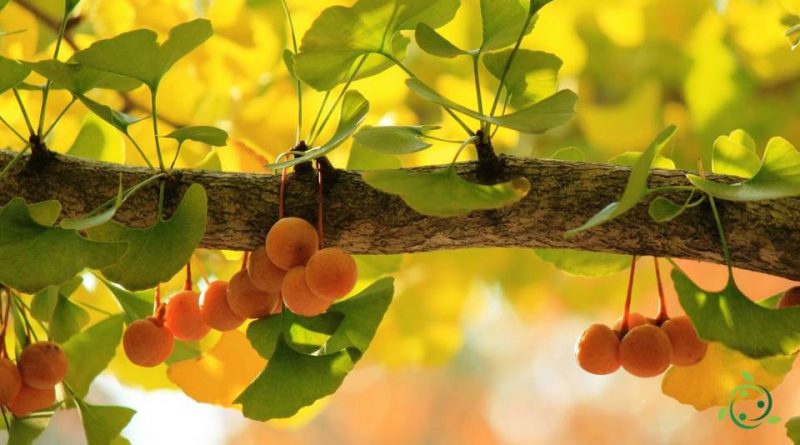 How Ginkgo biloba is grown

Ginkgo biloba (L., 1771) is a gymnosperm plant, the only surviving species of the Ginkgoaceae family and an ancient tree whose origins date back to 250 million years ago in the Permian, which is why it is considered a living fossil. This plant seems to grow spontaneously in China but the origin of this plant is not known precisely because it has been widely spread and cultivated for many purposes and is still cultivated in all its extension.
Ginkgo biloba is a dioecious plant and the “catkins” are carried by the male plants while the ovules, joined in pairs by a peduncle, are found on female plants.
This plant reaches sexual maturity around 30-40 years and pollination is anemophilous and occurs in spring. Fertilization is delayed for 4-6 months, one egg aborts and the other falls not yet mature. The seed finishes maturing on the ground and germinates the following spring.

Cultivation –
Ginkgo biloba is a typically heliophilous plant which therefore prefers a sunny position and a cool climate.
It is less demanding in terms of soil even if it prefers acidic and non-asphyxiated soils. It is a plant that tolerates low temperatures and does not suffer damage even at -35 ° C. as regards the multiplication it generally takes place by layering or by seed or by semi-woody cuttings taken during the summer.
For a matter related to the unpleasant smell of the seeds it is preferable to cultivate the male individuals; this is because when the fruit falls to the ground it disintegrates and causes a bad smell due to the carboxylic acids it contains, therefore female plants are not suitable for ornamental uses; however the sex of the species is difficult to recognize as the plant does not have reliable secondary sexual characteristics.
For cultivation, therefore, male individuals are used agamically obtained by grafting.
Finally, remember that the plants do not tolerate pruning as the shortened branches dry out.

Uses –
Ginkgo biloba has long been cultivated in temples, both in Japan and China, because it was considered a sacred plant, in the Far East the seeds are considered a delicacy and are eaten after being roasted.
This plant was introduced in Europe in 1700 but is not of forest interest due to its wood which is fragile.
Instead, it is used as an ornamental plant and as a road tree because it resists climatic adversities, pollution and has no dangerous parasites.