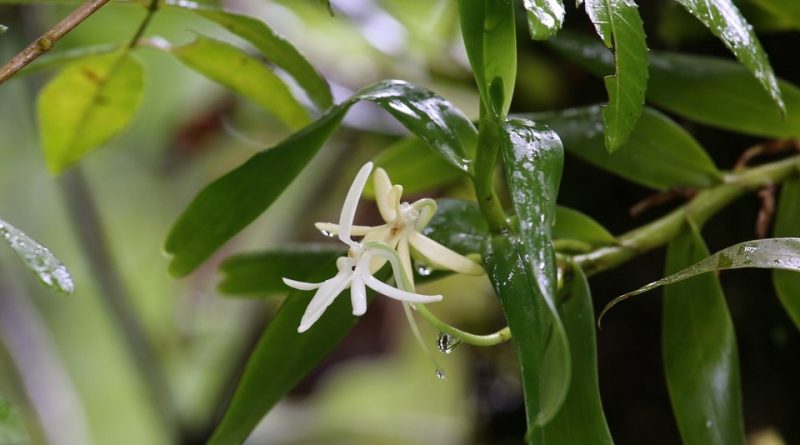 Etymology –
The term Jumellea of ​​the genus was dedicated to the French botanist Henri Lucien Jumelle (1866-1935) who was a French botanist.
The specific fragrans epithet comes from fragrant smelling, perfuming: fragrant, fragrant, perfumed.

Geographic Distribution and Habitat –
Jumellea fragrans is a plant native to the Mauritius and Reunion islands of the Indian Ocean.
Its habitat is that of an epiphytic plant in the lowland rainforest from 500 to 1,500 m above sea level. 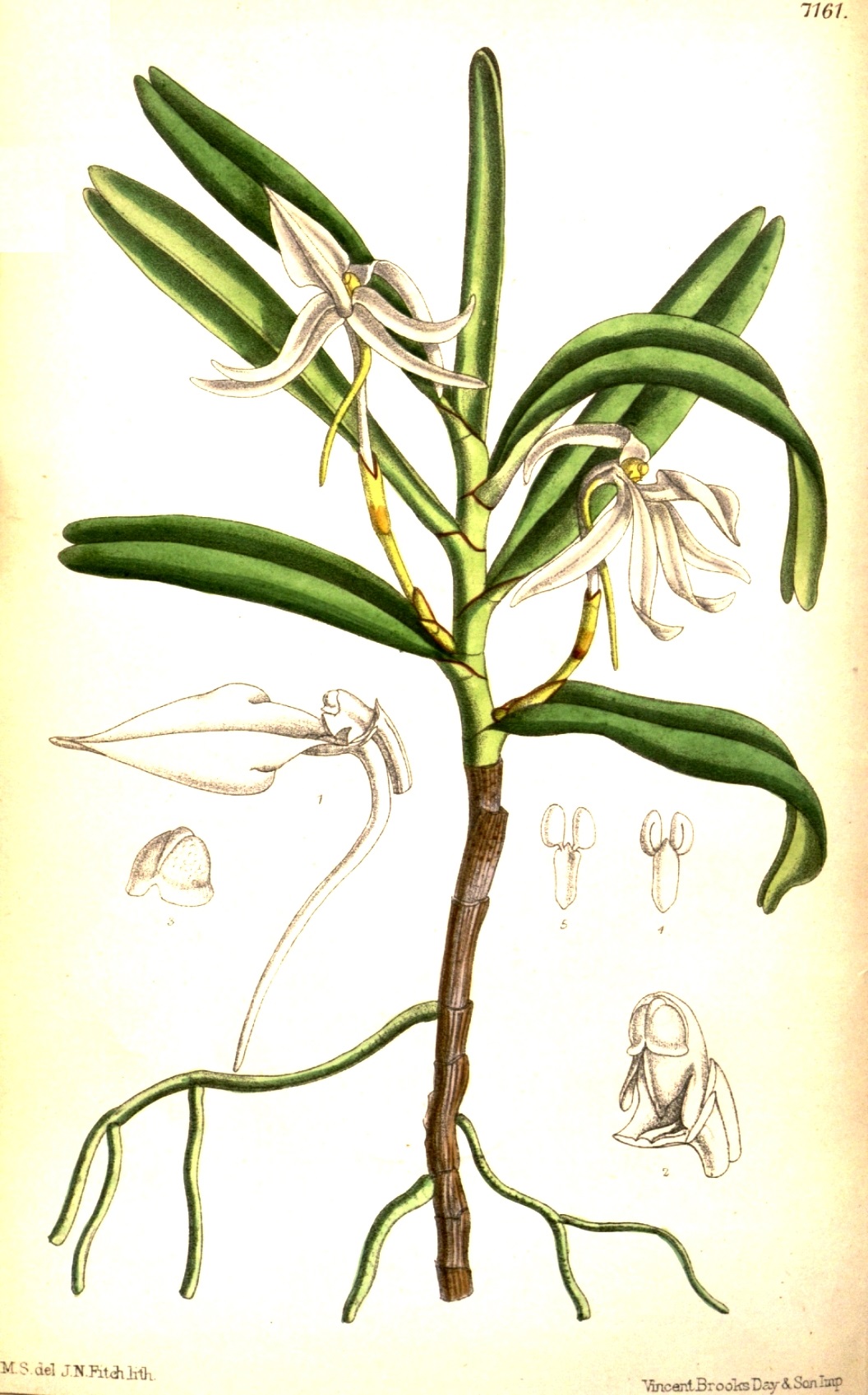 Description –
Jumellea fragrans is a fairly fast growing epiphytic orchid, which in a few years becomes a bushy, often semi-dependent plant with many shoots.
The stem is erect, branched, densely leafy wrapped in wrinkled sheaths and linear ligulate bearing, almost equally bilobed apical, enveloping basal of the flowers that bloom between late spring and early autumn on different axils, shorter than the leaves, long 10 cm; the inflorescence is single-flowered with 3 basal bracts and bearing fragrant flowers and leaves.
The flowers are pollinated by hawk moths.

Cultivation –
This orchid grows wild on the Reunion and Mauritius islands in evergreen forests at altitudes of 500 to 1500 meters as a medium-sized epiphyte.
The plant can be propagated by seed by sowing on the surface, preferably with the just ripe seed, without letting the soil dry out. The seed of this species is extremely simple, it has a tiny embryo surrounded by a single layer of protective cells. It contains very few food reserves and depends on a symbiotic relationship with a species of fungus. The fungal hyphae invade the seed and enter the cells of the embryo. The orchid soon begins to digest the fungal tissue and this serves as food for the plant until it is able to obtain nutrients from the decaying material in the soil.
For this reason it is good to use some of the soil that grows around the established plants to introduce the fungus, or to sow the seed around a plant of the same species and let the seedlings grow until they are large enough to move.

Customs and Traditions –
Jumellea fragrans is a plant that is used for both food and pharmaceutical purposes.
The fragrant leaves and flowers are boiled in hot water to extract the aromatic qualities and to flavor the rum on the island of Reunion. Other uses that are now practically abandoned were those of the digestive plant, used as a remedy for respiratory diseases, ice creams and creams.
The use of the plant for medicinal purposes in Mauritius is now believed to be in grave danger.
The whole plant, but especially the old dead and decaying leaves, has a sweet, coumarin-like scent.
The leaves are used to make a popular tea, commonly used within the growing zone of the plant.
From the aromatic leaves a tea called “The de Bourbon” is obtained.
The best flavor is obtained from the green harvested leaves which when you start to smell their scent and fragrance, are ready to use.
For medicinal uses, in the late 1800s, a French company began marketing a product called Faham which consisted of Jumellea fragrans leaves. This product was dipped in hot water to produce a fragrant tea that was very popular in its day for its unique taste and fragrance. Tea has been attributed as a cure-all to aid digestion and as a remedy for respiratory diseases. The leaves were also used to make ice creams, creams and other products very similar to those of vanilla today.
However, the use of this drink has fallen out of favor mainly due to its very high price due to the difficulty of obtaining the leaves of this species which is found in a very inaccessible forest and so stocks have never been large.

Preparation Method –
Jumellea fragrans is a plant that grows in a reduced and inaccessible habitat which, especially in the past, was used for both medicinal and food purposes.
From its aromatic leaves a tea called “The de Bourbon” is obtained which acquires the best flavor when these are picked green.
The leaves must be carefully cut and left to dry in a dark and airy place. They will be ready to make this drink when you start to smell their scent and fragrance.