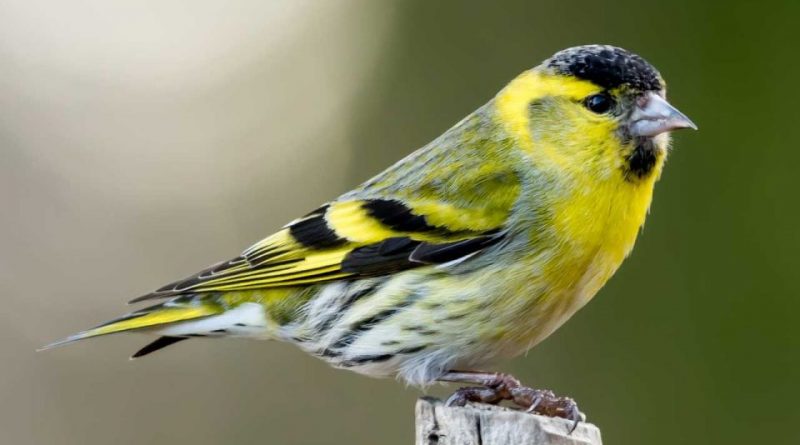 The European siskin, common siskin or just siskin, (Spinus spinus, Linnaeus 1758) is a passerine bird belonging to the Fringillidae family.

Geographic Distribution and Habitat –
The European siskin is a Palearctic species widespread throughout Europe with the exception of the extreme northern regions of Scandinavia and Iceland, in part of Asia and in North Africa. In North Africa it migrates during the cold season, as well as in Southern Europe and the Middle East.
In detail it is resident all year round in the British Isles, in the southern coastal area of ​​Fennoscandia, in Central Europe from Germany to the Alps and east to south-eastern Ukraine and European Russia, as well as in the mountainous areas of Southern Europe and the Balkan Peninsula, the Carpathians, the Caucasus, northern Turkey and northwestern Iran. In the interior of the Scandinavian peninsula and Finland and in Russia up to the upper reaches of the Ob and the Enisej, the siskin is only a summer visitor, while during the winter the populations of the cold areas migrate to southern Europe (including the Italy and Corsica), in the Levant, towards the Nile delta and in the Maghreb from the north of Tunisia to the Atlantic coast Morocco: the Asian populations of siskin, on the other hand, are always migratory, choosing for reproduction the Russian Far East between Lake Baikal, the Jablonovyj Mountains, the Sea of ​​Okhotsk and the north of Manchuria and Mongolia, as well as Sakhalin (and probably also south-central Kamchatka, the Kuril Islands and the north-east of Hokkaidō), while during the cold season they winter in Korea , Japan, Central (Yangtze Valley) and Eastern China and Taiwan.
The migratory movements are rather irregular, with the same populations that can suddenly abandon the classic wintering sites to go further south, perhaps in relation to the abundance of resources and the number of specimens.
During the dispersal of the young or the migratory movements, it happens that some isolated specimens reach Iceland, the Canaries, New England or the Aleutian islands.
Its characteristic habitat is that of pine forests, especially the humid foothills or hills with a prevalence of larch and spruce, from which it obtains food during the winter and shelter for the offspring during the summer: the siskins are however quite adaptable. , occupying without problems also mixed wooded areas, Mediterranean scrub, grassland areas on the edge of alpine woods, taiga and cultivated areas. 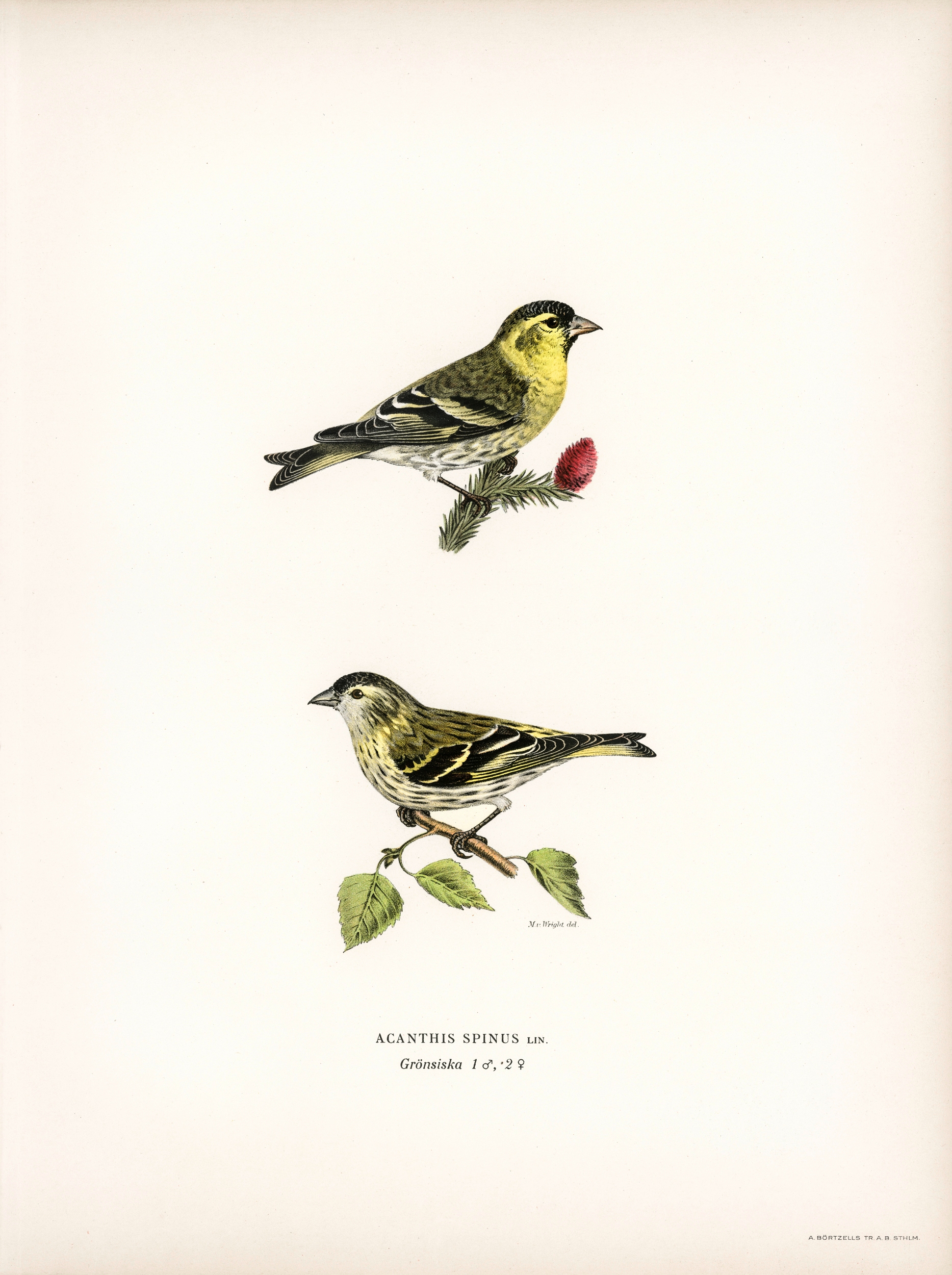 Description –
Spinus spinus is a small bird with a length of 11-13 cm, a wingspan of 21-23 cm, weighing about 14 grams. Within the species there is an evident sexual dimorphism.
The male, in fact, has greenish shoulders and back with brown streaks and the upper parts of the blackish wings with an evident yellow bar (clearly visible even when placed). Its head is yellow – green with a blackish vertex and throat. The chest is yellow and then fades towards the abdomen and belly whitish with brown streaks. The legs are blackish and the bill is predominantly gray with pink hues.
The females are similar to the males but have a predominantly green head with yellow shades and fine brown streaks; the chest is off-white. The juveniles are very similar to the females but without yellow hues and heavier streaks.
Ultimately, these birds have a slender but massive appearance, with a square-looking head, conical beak, pointed wings and slightly forked tail.

Biology –
The European siskin is a strictly monogamous species, whose breeding season runs from the end of February to August.
Couples are formed in the winter period, in which males compete with each other for females even in an aggressive manner, launching into singing competitions, ritual flights and chases: the actual courtship sees the male persistently following the female with ruffled feathers and the tail unfolded, thus showing her the yellow of the rump and at the same time trilling and singing. During the mating period, the couples tend to isolate themselves from the flocks, gathering in small reproductive colonies of a dozen or more specimens.
Immediately after mating, the nest is built which has the classic cup shape and is built in the terminal part of the branch of a conifer: its construction of the nest is carried out by the female who uses dried vegetable fibers to build it, lining the interior with soft material such as moss and down.
The female lays between two and six eggs that measure about 16.5 x 12 mm and are whitish in color, with the presence of sparse and minute brown punctuation: even the hatching is the exclusive prerogative of the female, with the male who remains on guard nearby. of the nest and takes care of finding food for himself and for the partner.
The chicks are initially blind and featherless; the hatching of the eggs takes place in the following 10-14 days after laying: they are fed by both parents with seeds and small regurgitated invertebrates.
However, they tend not to leave the nest definitively before the month of life, asking more and more sporadically for cues from their parents (who, not infrequently, if the availability of food allows it, are committed to carrying out a second brood) , before dispersing and able to fly autonomously around the 25th day of life.

Ecological Role –
The Spinus spinus is a very lively and cheerful bird even if rather shy, which tends, outside the reproductive season, to gather in flocks even quite substantial numerically, sometimes in association with other species, especially in correspondence with abundant food sources. The groups spend most of the day in the branches or in the tall grass in search of food, and then return in the evening to trees-perches where they can spend the night.
Furthermore, within the flocks there is a precise hierarchical order, sanctioned by the fact that the subordinate specimens regurgitate part of the food to give it to the dominant specimens of the same sex, often recognizable by their more vivid color.
As far as feeding is concerned, this is distinctly granivorous: during the colder months, the siskins feed mostly on seeds of birch, alder, elm and poplar (although these last two plants are visited in a minor way), while in late spring and summer their diet consists mostly of herbaceous plants (thistles, dandelion, artemisia, centaurea, hypericum, meadowsweet, farinello and romice), and in spring they are assiduous frequenters of pine forests, especially those with a prevalence of fir, spruce and larch, from the pine nuts of which (food of which they are extremely greedy) they obtain the energy necessary to better face the reproductive season. Not infrequently, during the cold season the siskin can visit the cultivated areas to find food, proving that they are not afraid of humans even though they are rather shy.
These birds can also feed on leaves, shoots, berries and fruits, while rather sporadically (and especially during the mating season, when the energy requirement is increased) they eat insects and small invertebrates.
However, they prefer coniferous woods, particularly those formed by larch and spruce, but they also like alder and birch seeds, as well as those of composites.
As for their global status, their combined population is estimated to be between 20 and 36 million. The European population is estimated at between 2.7 and 15 million couples. There does not appear to be a major decline in population numbers at the moment and for this reason the IUCN has listed their conservation status as least of concern.
The European siskin appears in Annex II of the Bern Convention as a protected bird species.