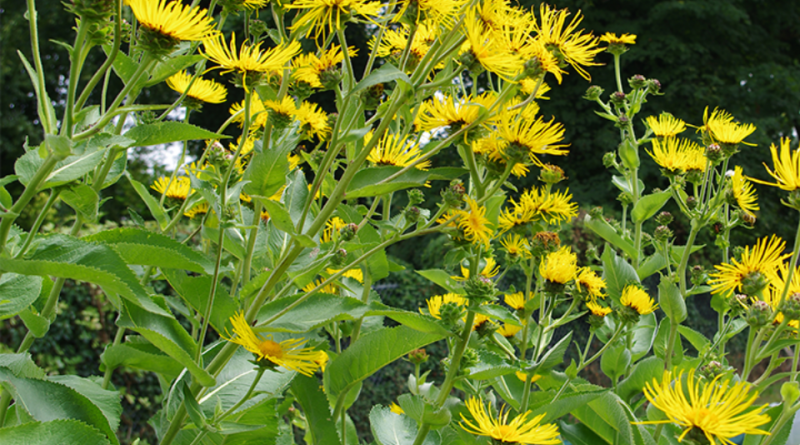 The Elecampane or horse-heal or elfdock (Inula helenium L., 1753) is a herbaceous, perennial species belonging to the Asteraceae family.

Etymology –
The term Inula is given to a plant mentioned by Pliny: it seems to derive from the Greek ἰνέω / ἰνάω ineo / inao purgare, due to the medicinal properties of some plants of this genus.
The specific epithet helenium comes from the Greek ἑλένιον helénion inula, elenio, plants cited by various Greek authors; according to Mattioli it derives from Pliny, XXXI book chap. X: Helenius is said to have been born of Helena’s tears, and therefore he is most excellent on the island of Helena.

Geographic Distribution and Habitat –
The Elecampane is a species native to the mountains of southern Europe and present in almost all regions of Italy (missing in Lombardy, Trentino-Alto Adige, Calabria and Sicily).
Not all authors agree with the chorological type of this plant: some claim that it is native to central Asia and that in our territories it was cultivated in the past for medicinal purposes and then spread spontaneously in the Mediterranean basin.
In Italy it is present in the north, in the center and partly in southern Italy. In particular in the Alps it is possible to find it quite frequently in the province of Como (in other areas it is considered rare).
In Europe it is widespread mainly in the southern areas. On the European reliefs it is present in the Vosges, Black Forest, Pyrenees, Massif Central, Massif of Jura, Carpathians and Balkan Mountains.
Its habitat is that of ruderal places and humid woods, coppices and ditches; but also the hygrophilous meadows and pastures. The preferred substrate is both calcareous and siliceous, with soil having a neutral pH and high nutritional values ​​and on average humid. It is widespread in a prevailing altitude range between 500 and 1200 m a.s.l.; therefore they frequent the following vegetational levels: hilly and mountainous. 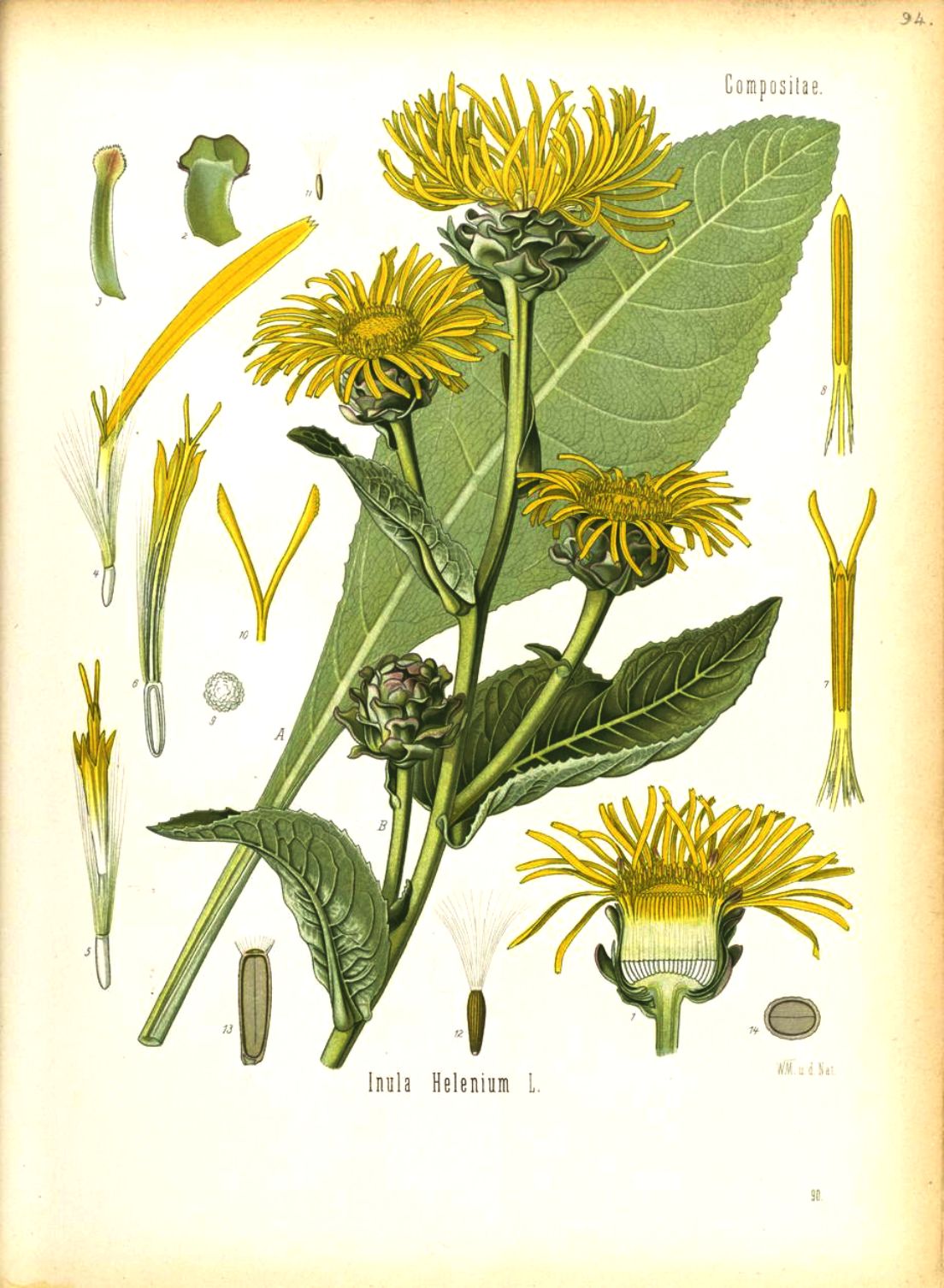 Description –
Inula helenium is a perennial plant with a large branched fleshy rhizome.
The very sturdy stem is 100-200 cm high, covered with patent bristles in the lower part, while above it is only pubescent.
The basal leaves are ovate-spatulate, very large, even 70 cm long, with a long petiole, and acute apex. The leaves of the caule are lanceolate, alternate, thick, while the upper ones are sessile and cordate-amplessicauli, all acute, serrated on the edges, gray-tomentose on the underside.
The inflorescence is corymbose and is formed by large flower heads with a diameter of 6-7 cm. The flower heads are pedunculated; the hemispherical envelope is composed of several scales, in 3-4 imbricated and tomentose series, the external ones similar to small leaves, spatulate, curved outwards; golden-yellow flowers and radiant ligules approx. 3 cm and 1-2 mm wide.
The fruits are 5 mm long hairless cypselae, with pappus of (40) 50-60 bristles connected to the base 6-10 mm long.

Cultivation –
The Elecampane was once cultivated for medicinal purposes, escaped cultivation, it is found almost everywhere.
The widespread cultivation, especially in past times, has led some authors to question the native of this species in Italy.
It is an easily cultivated plant that grows well in humid and shady locations.
It can be propagated by seed.
For the details of the cultivation technique, refer to the specific sheet.

Customs and Traditions –
The Elecampane is a medicinal plant that found greater use in ancient times.
Its root is the most active part. The dried rhizome is used orally for its richness in inulin, an active ingredient, which exerts a fluidifying activity, especially in the treatment of respiratory system disorders. Calms the cough, disinfecting the respiratory tree, resolving cold bronchitis. Another active ingredient is Alantolactone, which in addition to having anti-inflammatory and antiseptic properties, is useful for chronic, asthmatic and emphysymatous bronchitis. It also has a diuretic action, which favors the elimination of urea and chlorides, and is useful for the treatment of gout and some rheumatic forms.
For external use, they prepare decoctions and ointments that are remedies against itching resulting from eczema, various dermatoses and skin rashes in general.
Also, since ancient times, the root has been used for the production of liqueurs. The wine of Enula is famous, an aperitif, which is obtained by adding a percentage of dried root to the wine. In Alsace the “reps” is still produced today, a drink that is obtained by macerating the root in the must. It is also indicated in digestive atony and in appetite. In the past it was used both to dye blue cotton or linen clothes, and, by adding blackberries, as a mordant in dyes.
Some antibacterial activity has also recently been demonstrated.
Today the large-flowered variety is used in gardens to create large patches of color.
The plant, as mentioned, has several active ingredients, especially in the root, and was cultivated for a long time both as a medicinal plant and for the production of liqueurs.
The substances present are: small quantities of ethereal oil together with 1 – 3% of crystalline substance (which is the essence of Inula). There are also high percentages (19 – 45%) of inulin. Some substances of this plant (such as sesquiterpene lactones) can cause allergic contact dermatitis; large amounts of these substances can cause vomiting and diarrhea.
Among the other uses of this plant are those for ornamental use. The utility of Inula helenium also extends to gardening and ornamentation with cut flowers. Even if their appearance is a bit coarse they are easy to grow and have a strong vegetative development.
Finally, it should be remembered that this plant is used, in the industrial field, to produce blue dyes.

Preparation Method –
Elecampane is a plant used for both medicinal and food purposes.
The parts used are mainly the roots from which preserves, extracts and distilled water were obtained.
The harvesting period is between autumn or early spring from adult plants.
Furthermore, in ancient times it was used to prepare some liqueurs and wine-based drinks. In France and Switzerland it is used in the manufacture of absinthe.