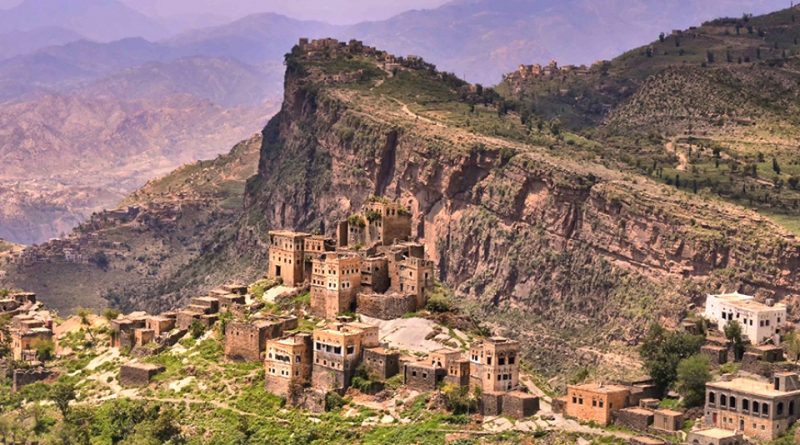 Yemen is a state located at the southern end of the Arabian Peninsula.
The republic of Yemen, with an area of ​​527,970 km², in addition to the mainland, includes the archipelago of Socotra, consisting of four islands, of which the island of Socotra in the Indian Ocean, and the archipelagos of Perim, Kamaran and Zuqur- Hānīsh in the Red Sea.
Since 1990 the capital of Yemen is Sana’a with a population of 3,937,451 inhabitants as of 2012.
From an economic point of view, Yemen is among the poorest countries in the world, with conditions of widespread underdevelopment and almost total dependence on external aid, despite the fact that undoubted progress has been made since 1990, the year of reunification.

Geography –
Yemen is a state located in the Middle East, in the south of the Arabian Peninsula, bordering the Arabian Sea, the Gulf of Aden and the Red Sea and to the east with Oman and to the north with Saudi Arabia. The borders with Saudi Arabia have only recently been precisely defined, as they are largely uninhabited territories.
Also belong to Yemen the Hanish islands and the island of Zuqar, the island of Kamaran and Perim, all in the Red Sea, while the Yemeni island of Socotra is located in the Arabian Sea.
This country borders Saudi Arabia to the north and Oman to the east. Its coasts are washed to the west by the Red Sea and to the south by the Gulf of Aden (Indian Ocean).
Geographically, Yemen can be divided into four main regions: the coastal plains to the west, the western highlands, the central ones and the Rub ‘al-Khali desert to the east.
The coastal plains called Tihāma (hot lands) are very arid. Despite this, there are several lagoons, including unhealthy ones, which are infested with malaria-carrying insects.
The Tihāma abruptly terminate at the foot of the western highlands. This area of ​​hilly and mountainous reliefs is today intensively terraced to meet food needs, it has the highest amount of water precipitation in the Arabian Peninsula; it goes from 100 mm per year in the driest areas to 760 mm per year in Ta’izz, and over 1 000 in Ibb. Here agriculture is very diversified, with a predominance of sorghum crops, but with the presence of cotton crops and fruit trees, including mangoes. Remarkable is the difference in temperatures between day and night. In this region there are perennial streams. Evaporation in the Tihāma, however, is so strong that the streams coming from the highlands do not reach the sea, even if they contribute to forming substantial reserves of aquifers.
The central highlands are located at a height of more than 2000 m. This area receives less rainfall than the western highlands because it is sheltered from the mountains, but still receives enough rain for extensive crops, both wheat and barley, to be grown. Here the daytime temperatures are among the highest on Earth: variations between 30 ° C during the day and 0 ° C at night are considered normal. The capital San’a is located in this region. The highest mountain of the Yemeni plateau is the Jabal Nabi Shuab of 3760 m a.s.l.
The Rubʿ al-Khālī desert to the east is located at a much lower altitude, generally below 1000m, and receives almost no rainfall. It is populated solely by Bedouins who raise herds of dromedaries.
The hydrography of Yemen is characterized by the furrows of the widyān (pl. Of wādī), which cross various areas of the country and have different paths between them; in the western belt the edge of the plateau they are fast and torrential watercourses, which descend from the escarpment both towards the sea (wādī Saham) and towards the deserts of the interior (wādī Adhana); in the center of the territory, on a stretch parallel to the coast line, it flows for approx. 600 km, the largest of the Yemeni rivers, the wādī Ḥaḍramawt (which then, in the direction of the mouth, takes the name of wādī al-Masila). In the eastern belt, the widyān are mostly lost in the desert sands.

Climate –
Yemen has a predominantly tropical climate; on the coast the summers are very hot and humid, temperate in the highlands. The best times to visit the highlands are March-April and October-November. On the coasts the most suitable period is from December to February; temperatures range from 24 degrees in January to 32 in June in Aden, while in San’aa there are average maximums of 20 ° C and minimum even -5 ° C .; as far as rainfall is concerned, they are more frequent in mountainous areas, while in inland areas they are scarce and the ground is mostly arid. 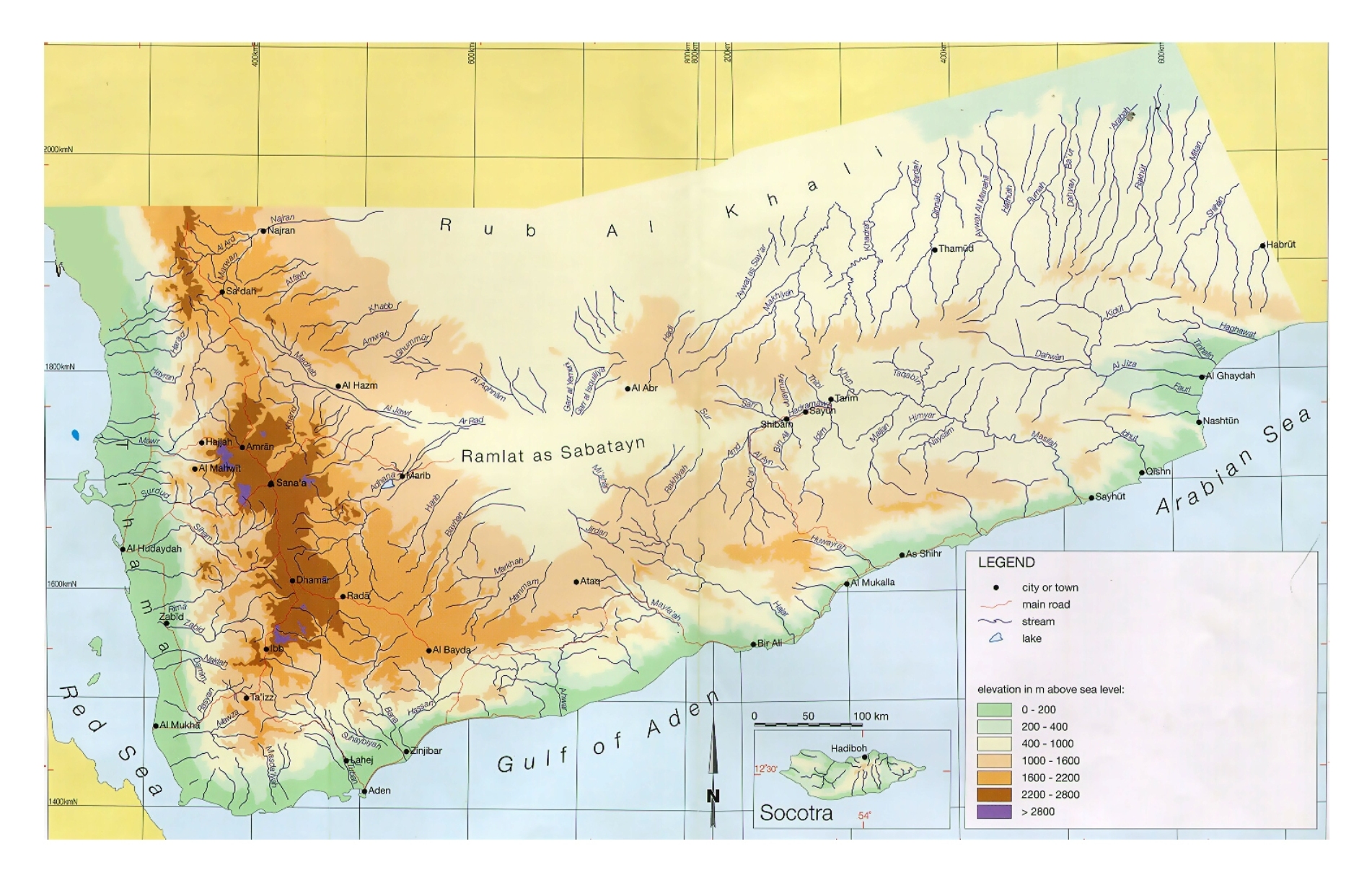 Flora-
The flora of Yemen is characterized by the differences in altitude that characterize this territory. At high altitudes, the native flora of the western highlands is dominated by African Juniper. This juniper forest is similar to the East African forest.
Vachellia origena is a common leguminous tree that grows in patches of wood, in hedges and as single trees on cultivated terraces in the western highlands. Shrubs like Euryops arabicus grow here, and on the southern slopes there are succulent plants like aloes and euphorbias. At lower elevations there is a shrub forest with species including the Abyssinian Rose and the Camphor Bush. Lower still, below about 2,000m, Acacia and myrrh are the dominant woody plants.
In Hadhramaut, which is the region of southern Yemen, wheat and millet are grown and both coconut and date palms are grown, and frankness grows here too. The western coastal plains of Tihama are irrigated for the production of citrus fruits, bananas and dates. Figs, coffee, khat, wheat, barley and sorghum are grown on the slopes above. On the Red Sea coast there are extensive stands of white mangroves on a coastal stretch of approximately 84 km (52 ​​mi), with sporadic clusters elsewhere.
The sandy Rub ‘al Khali has very little plant diversity, around 37 species of flowering plants have been recorded here, 17 of which are found only on the outskirts. There are no trees here, typical xeric plants include the dwarf shrubs Calligonum crinitum and saltbushe several species of sedge.

Fauna –
About 464 bird species have been recorded in Yemen, ten of which are endemic to the country, including the Socotra Buzzard, the Socotra Axiol, the Socotra cisticola, the Socotra warbler, the Socotra Starling, the Socotra Sunbird, the ‘Arabic accent, Socotra’s Bunting, Socotra’s Sparrow and Abd al-Kuri’s Sparrow. The rock faces of the western highlands provide habitat for the griffon vulture, Verreaux’s eagle and the little Barbary falcon. The juniper groves to the west are home to Yemen linnet, Yemen thrush, Yemen warbler and the African Paradise Flycatcher, and many migratory birds pass through this area twice a year.
Hamadryas baboon is present in some parts of the country and there are believed to be around seventy wild Arabian leopards.
In addition, a captive breeding program is underway in the highlands at Taiz Zoo.
Other mammals inhabiting Yemen include the mountain gazelle, gray wolf, Blanford’s fox, Rüppell’s fox, caracal, sand cat, wildcat, common genet, striped hyena, golden jackal, honey badger, mongoose from the bushy tail, rock hyrax, desert hedgehog, Arabian shrew, golden spiny mouse, lesser Egyptian jerboa, several species of gerbils, king jird, Yemeni mouse and a number of bat species.
The snakes that live in Yemen are the Egyptian cobra, the horned viper and the breath viper, as well as several species of sea snakes. There is an endemic monitor lizard (Varanus yemensis), numerous lizard species, several geckos, and the veiled chameleon. The African helmeted turtle is found on land and several species of sea turtle breed on beaches.
Yemen has coasts on the Red Sea, the Indian Ocean and the Persian Gulf. These mostly have shallow coral reefs where invertebrate fauna proliferate and diversify in corals.
These coral reefs provide a spawning and protective environment for the young of many fish species. Marine mammals, including whales and dolphins, are found here, as are sharks and many species of fish. Seabirds proliferate along the coast.
Socotra Island and its archipelago are also part of Yemen, about 240 km east of the Horn of Africa and 380 km south of the Arabian Peninsula. These islands have unique flora and are fringed with coral reefs. About seven hundred species of plants and animals are endemic to the Socotra group of islands.