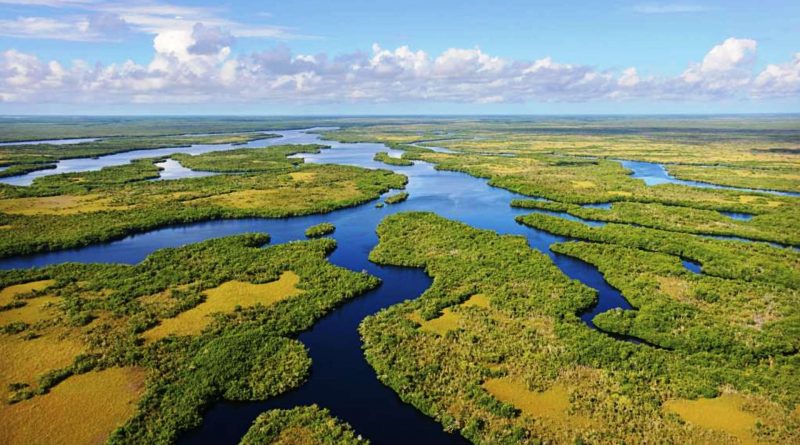 The Everglades National Park, whose WDPA Code is: 971 is a protected area in the United States with a land area of ​​6253.26 km².
This park protects the southern portion of the Everglades (south of Tamiami Trail), but only accounts for 20% of the original area.
This park has been recognized by Unesco as a World Heritage Site.
The area in which the park falls was declared a national park on May 30, 1934, but did not receive its official title before December 6, 1947. The park was declared a biosphere reserve on October 26, 1976. On November 10, 1978 a large part of the park it became a wilderness area. To be precise, in 2003 they were 5247 km², about 86% of the park. It became a World Heritage Site on October 24, 1979 as well as a Swamp of National Interest from June 4, 1987. Despite all these awards, in 1993 it was listed by UNESCO as a heritage in danger.

Geography –
Everglades National Park is located within an area surrounded by the urban and agricultural areas of Miami, Homestead and Florida City to the east, the Straits of Florida and the Florida Keys to the south, the Gulf of Mexico to the west and the National Reserve of Big Cypress to the north.
Everglades National Park is a large natural area that encompasses the southwestern portion of the wider Everglades, a region in South Florida that makes up the largest eastern subtropical desert in the United States.
Everglades National Park’s many visitor centers have natural history exhibits. The park is popular with rowing and canoeing enthusiasts; there are several signposted canoe trails, including the 99-mile (159 km) Wilderness Waterway along the western side of the park.
There are two seasons, wet and dry, but the climate is almost constant. 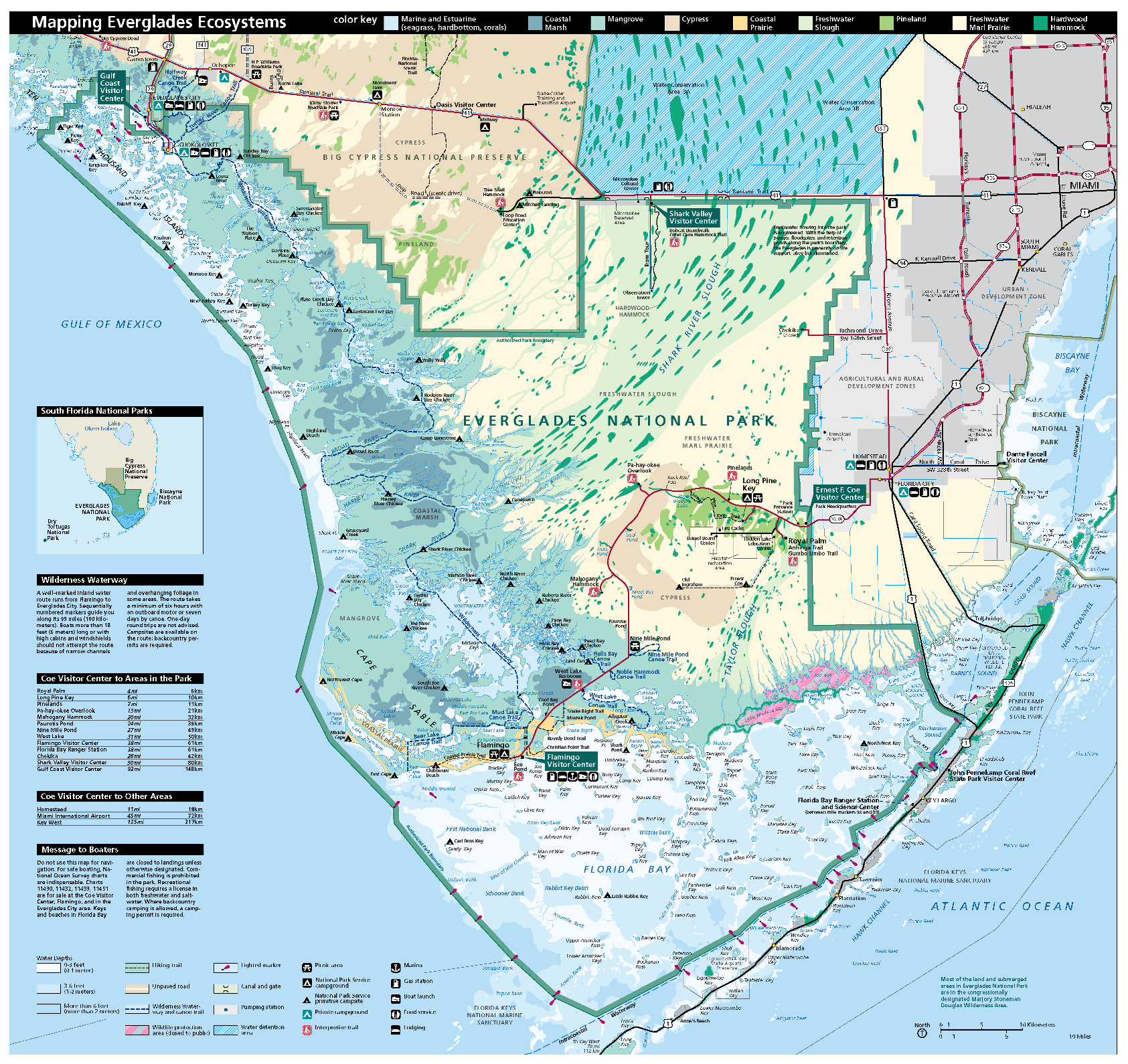 Flora –
The most characteristic habitat of the Everglades are the swamps of “sawgrass marsh”, large expanses of shallow river water, dominated by the presence of the Cladium mariscus subsp. jamaicense; these are the “rivers of grass” of literature, which once occupied over a third of the land area of ​​southern Florida.
In the deeper waters of the ponds there are various species of water lilies (Nymphaea spp., Nuphar spp.) And carnivorous plants (Utricularia spp.).
Another characteristic habitat of the Everglades are the so-called hammocks, small limestone islets, the largest of which are extended up to 40 km², which rise from 1 to 3 m above the water level, covered with dense tropical vegetation.
The land in which the Everglades National Park falls is very fertile and is subject to frequent flooding but, gradually, the water is replaced by the soil. The vegetation is lush; there are evergreen oaks, wild lemons, wild orange trees, cucumbers, pawpaw, Custard-apple and wild rubber trees, which are just some of the indigenous species; these include many species of wild flowers, especially of the orchidaceae genus.

Fauna –
The Everglades National Park ecoregion is home to a remarkable animal biodiversity: 30 species of reptiles, 14 species of amphibians, 17 species of mammals and over 70 species of nesting birds have been recorded.
Among the reptiles there are three primary predators of the ecoregion: the Mississippi alligator (Alligator mississippiensis), the spectacled caiman (Caiman crocodilus) and the American crocodile (Crocodylus acutus).
Another primary predator is the puma (Puma concolor couguar), once widespread throughout the southeastern United States, and now restricted to southern Florida, with an estimated population of less than 100 specimens. aquatic are the white-tailed deer (Odocoileus virginianus), the bobcat (Lynx rufus), the wetland rabbit (Sylvilagus palustris), the raccoon (Procyon lotor), the opossum (Didelphis marsupialis), the gray fox (Urocyon cinereoargenteus) ), the nine-banded armadillo (Dasypus novemcinctus) and the North American river otter (Lontra canadensis). In coastal waters it is not uncommon to meet the Caribbean manatee (Trichechus manatus).
Among the birds, considering also the species of passage, in the region have been reported over 360 different bird species. Among the species that nest in this territory are the white ibis (Eudocimus albus), the American stork (Mycteria americana), the green heron (Butorides virescens), the great white heron (Ardea alba), the blue heron greater (Ardea herodias), the snow egret (Egretta thula), the tricolor heron (Egretta tricolor), the little blue heron (Egretta caerulea), the cattle egret (Bubulcus ibis), the red egret (Egretta rufescens), the night heron (Nycticorax nycticorax), the yellow-headed night heron (Nyctanassa violacea), the American lesser little bittern (Ixobrychus exilis), the black lizard (Plegadis falcinellus), the pink spoonbill (Platalea ajaja), the podilimbo (Podilymbus podice bruno) Pelecanus occidentalis), double-crested shag (Phalacrocorax auritus), aninga (Anhinga anhinga). The region is also home to several birds of prey including the bald eagle (Haliaeetus leucocephalus), osprey (Pandion haliaetus), swallow-tailed kite (Elanoides forficatus), white-tailed kite (Elanus leucurus), Everglades kite (Rostrhamus sociabilis), the red-shoulder buzzard (Buteo lineatus) and necrophages such as the black-headed urubus (Coragyps atratus) and the red-necked vulture (Cathartes aura).
The streams are inhabited by North American river otters, manatees, Mississippi alligators, and American crocodiles. This park is the only place in the world where the last two species coexist.