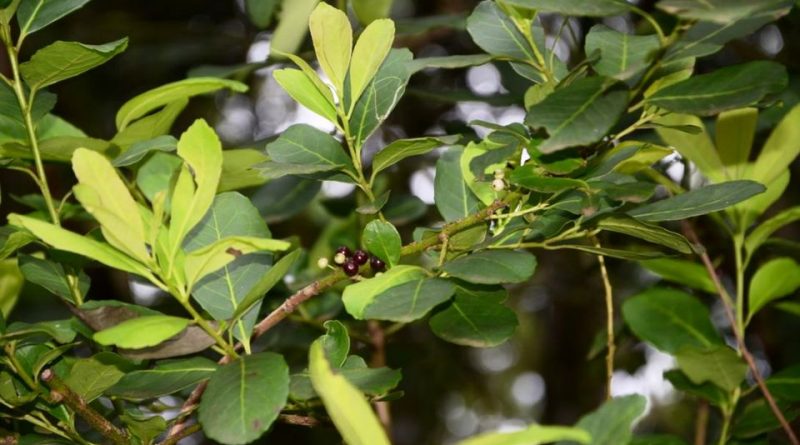 The Yerba mate or Yerba-maté (Ilex paraguariensis A. St. Hil., 1822) is an arboreal species belonging to the Aquifoliaceae family.

Etymology –
The term Ilex comes from ilex, the Latin name of the holm oak (Quercus ilex), used by Linnaeus as a generic name of holly for similar leaves; according to some authors it may be derived from the Greek ὑλήεις hyléeis wooded, woody.
The specific paraguariensis epithet refers to its origin in Paraguay.

Geographic Distribution and Habitat –
Yerba mate is a plant native to South America and found in Argentina, Uruguay, Paraguay, southern, eastern and central Brazil.
Its habitat is that of the cool, humid and tropical highlands near streams and river valleys at altitudes up to 1,500 meters. 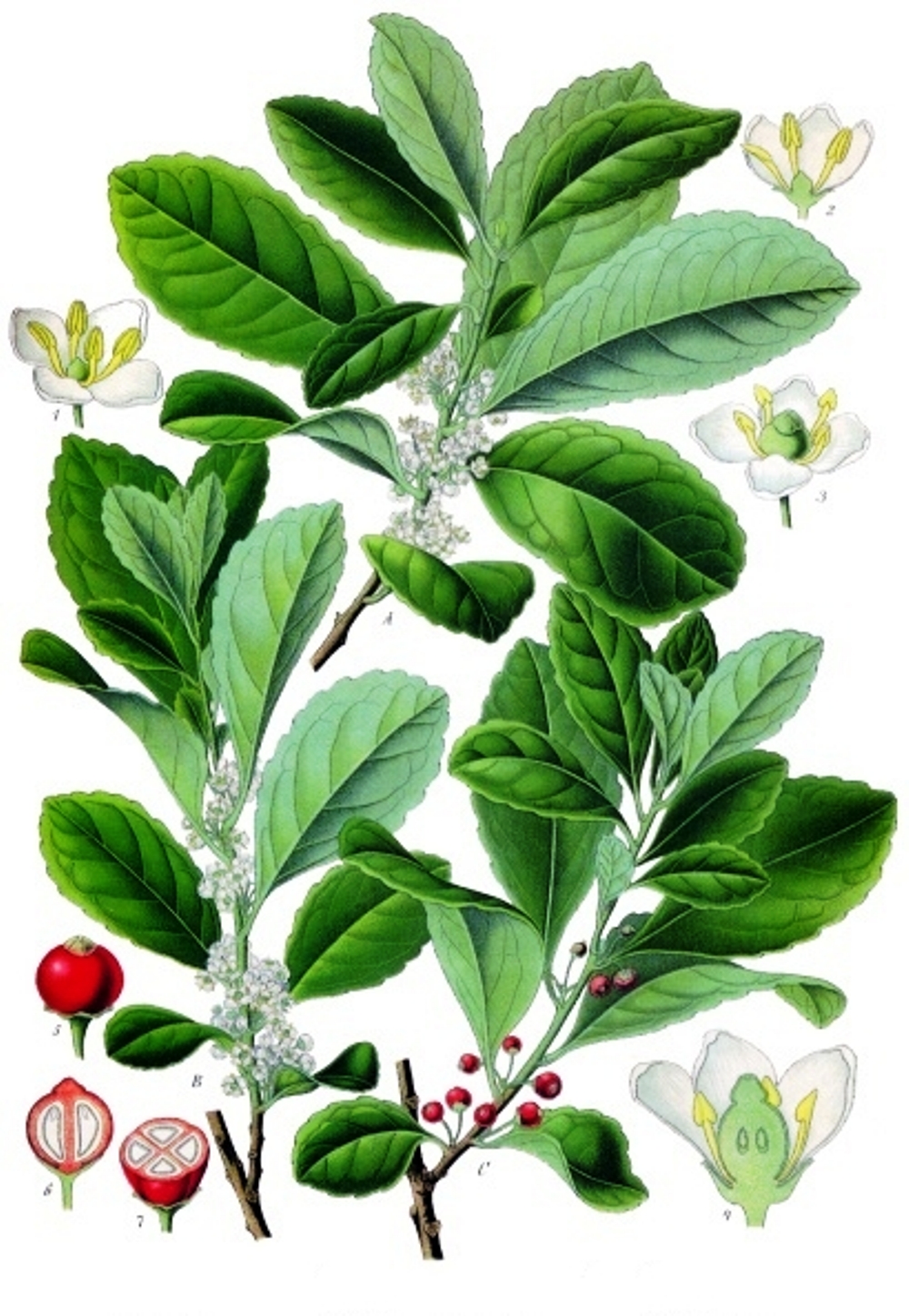 Description –
Ilex paraguariensis is a plant at first in a shrub form and which then becomes, when ripe, a tree, with heights of up to 15 meters and with dense and oblong foliage and a short trunk of 30-40 cm in diameter.
The leaves are evergreen, 7–110 millimeters long and 30–55 millimeters wide, with serrated margins. The leaves contain caffeine (known in some parts of the world as matein) and related xanthine alkaloids and are harvested commercially.
The flowers are small and greenish-white with four petals.
The fruit is a red drupe 4-6 millimeters in diameter.

Cultivation –
Yerba mate is a small, slow-growing evergreen tree that has been used as a stimulant drink for hundreds of years and is a more common drink than tea (Camellia sinsnsis) in South America.
This plant is grown and harvested in the wild in its native South America; it is also grown in the Iberian Peninsula and is sold in countries all over the world.
This subtropical and tropical plant can also be grown in the warm temperate zone. It grows best in areas where annual daytime temperatures are between 17 and 26 ° C, but can tolerate 12 – 30 ° C.
Mature plants cannot tolerate temperatures of -6 ° C or lower, but the growth of young plants can be severely damaged at -1 ° C.
It prefers an average annual rainfall in the range of 1,200 – 2,000 mm, but tolerates 700 – 2,500 mm, it also prefers a sunny position, managing to grow even in light shade and in a wide range of soils, provided they are well drained, even if it prefers a soil rich, slightly acidic in light shade with a pH between 6.5 and 7, tolerating 5.8 – 8.
Young plants are very slow to stabilize when planted; they are also dioecious plants so, if fruits and seeds are required, both the male and the female form must be cultivated.
Propagation can take place by seed which germinates very slowly, taking 2-3 years to germinate.
It is advisable to store the seed for 4-7 months in warm, humid sand to allow the seed to finish ripening before sowing it. Sowing should be done in a shaded seedbed. Germination should therefore take place within a few days.
The seedlings should be ready to be transplanted to their permanent locations 10-11 months later.

Customs and Traditions –
Yerba mate was first consumed by the indigenous Guaraní and also spread to the Tupí people who lived in the departments of Amambay and Alto Paraná in the territory of Paraguay.
Its consumption spread during the European colonization, particularly in the Spanish colony of Paraguay at the end of the 16th century, both among the Spanish colonists and among the indigenous Guaraní, who had consumed it to some extent before the arrival of the Spaniards. This widespread consumption made it the main commodity of Paraguay, above other commodities, such as tobacco, and the labor of indigenous peoples was used to collect the product from the woods.
In the mid-17th century, the Jesuits succeeded in domesticating the plant and establishing plantations in their Indian areas in Misiones, Argentina, sparking fierce competition with Paraguay’s wild stand gatherers.
From here the plant began its foray into other non-Paraguayan territories. After their expulsion in 1770, their plantations fell into disrepair, as did their domestication secrets.
Thus it was that Brazil became the largest producer of mate. In Brazilian and Argentine projects, between the end of the 19th and the beginning of the 20th century, the plants were again domesticated, paving the way for planting systems.
When Brazilian entrepreneurs turned their attention to coffee in the 1930s, Argentina, which had long been the first consumer, became the largest producer, resurrecting the economy in the province of Misiones, where Jesuits once had most of their plantations. For years, the status of the largest producer has shifted between Brazil and Argentina.
Today, Brazil is the largest producer, with 53%, followed by Argentina with 37% and Paraguay with 10%.
For this important crop and source of income in the city of Campo Largo, state of Paraná, Brazil, there is a Mate Historical Park (Portuguese: Parque Histórico do Mate), funded by the state government to educate people on the sustainable harvesting methods needed. to maintain the integrity and vitality of the oldest wild mate forests in the world. Unfortunately, as of June 2014, however, the park is closed to the public.
Ilex paraguariensis is a plant from whose leaves we obtain, as mentioned, mate, a very popular drink in the Southern Cone of South America (Paraguay, Uruguay, Brazil, Argentina and Chile).
A stimulating drink is prepared with the leaves; young leaves are harvested in a tea-like way, then dried, finely ground and packaged.
Traditionally, the leaves are prepared in a similar way to tea, but the infusion is drunk directly from the spout of the teapot, or from a pumpkin or glass using a tube known as a bombilla.
This plant also has medicinal uses.
The leaves are rich in minerals and contain xanthine derivatives, including about 1.5% caffeine plus theobromine and theophylline, and up to 16% tannins. These are stimulants, diuretic, antirheumatic.
They are said to have the power to increase intellectual clarity and vigor.
The leaves are used internally in the treatment of headaches, migraines, neuralgic and rheumatic pains, fatigue and mild depression; they have also been used in the treatment of diabetes.
Among other uses, it should be remembered that wood is light, smooth, slightly compact, with little natural durability and is used only for making boxes and for fuel.

Preparation Method –
Ilex paraguariensis leaves are harvested when the berries are ripe, heated over a wood fire, ground into powder and then stored in bags for 12 months before being used.
With the leaves a stimulating drink is prepared but this infusion is drunk in a particular way, directly from the spout of the teapot, or from a pumpkin or a glass using a tube known as a bombilla.