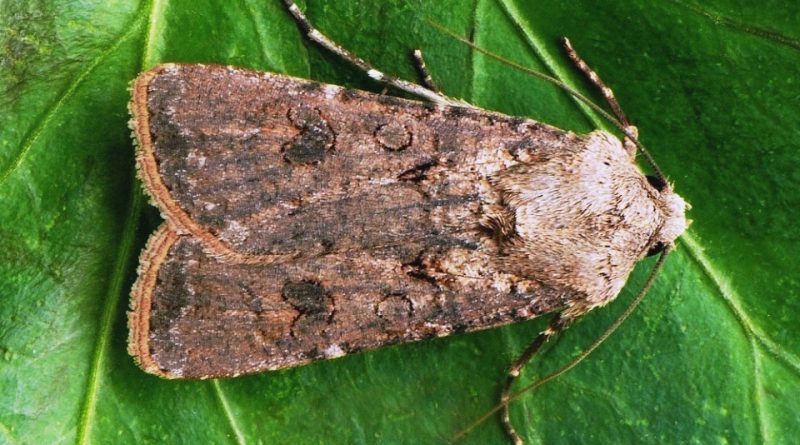 The Turnip moth (Agrotis segetum Denis & Schiffermüller, 1775) is a moth belonging to the Noctuidae family.

Geographic Distribution and Habitat –
Agrotis segetum is a common European species and is found in Africa and throughout Eurasia with the exception of the northernmost parts.
This species is found on a large number of plants, including Swiss chard, corn, vegetables and cereals.

Morphology –
The Turnip moth is a medium-sized moth with a wingspan of about 40 mm.
The front wings vary in color from ocher to brownish-gray; the livery also has dark, rounded and irregularly scattered patches on the wings. The main feature that distinguishes this butterfly from other Agrotis species is the shade of the hind wings, pure white in males and pearl gray in females.
The larvae are terricolous and about 40-45 mm long; these are greyish in color and have dark punctuation, moreover they frequently also have darker longitudinal bands.

Attitude and Life Cycle –
The Turnip moth overwinters in the ground in the mature larva stage or as a chrysalis.
In the spring period, the wintering larval stages can resume their activity which is very short (with the exception of rare cases in which it winters as a young larva), and then becomes calid.
Adults flicker in the period from late spring to early summer and the first flights generally begin in April.
The first adults lay eggs in the ground or on the basal parts of host plants or weeds adjacent to the fields.
The newborn larvae begin their activity on the young leaves, then descend into the rhizosphere where they cause the most consistent damage.
The maturation of these larvae occurs in the middle of summer and from these the second generation originates, whose adults appear in the period from the end of June to all of July and beyond.
This generation oviposes originating a second larval generation which can: overwinter or originate a third generation and sometimes, in rare cases, even a fourth generation; these last generations finish the cycle in autumn. Furthermore in some rare cases migrations can occur. Ultimately this insect completes 2-3 and rarely 4 generations per year.
The trophic action of the larvae is borne by the plants both on the epigeal and underground parts. However, the greatest action is that which occurs under the surface of the ground.
The larvae cause initial erosions on the leaflets of young plants and, subsequently, attack the hypogeal area, on which they cause erosions to the collar and the root system in general, including the fleshy underground organs.
In case of high presence of these butterflies both in arable land and on young seedlings, the attacks can cause serious failures, due to the action of the larvae.
In these conditions the attack becomes evident because the young seedlings collapse quickly and easily detach from the root system that remains in the soil, due to the erosion of the collar.

Ecological Role –
Agrotis segetum is a moth that is attracted to light and nectar-rich flowers of many plants including resinous, aromatic and other species such as conifers, eucalyptus and nicotiana.
Among the techniques to contain the populations of these butterflies there are cultivation methods such as fallow before sowing, which decrease the food resources for the larvae; moreover, in suitable conditions, it is useful to plow the land during the dry season to kill larvae and pupae and expose them to predators.
Furthermore, an increase in rotations and associations and biodiversity of agricultural companies in the agroecological direction should considerably decrease the populations of this insect.
The fight against Agrotis segetum has until now been of a chemical type, following the criteria of guided and integrated struggle; the interventions were performed, in a timely manner, on the young larvae of about 2 cm.
The fighting technique however provides for monitoring that can be carried out both with traps and with direct detections.
This monitoring can be performed with sex traps, both monitoring and mass trapping (typically funnel).
These traps must be installed in the period of late March, generally at the edges of the field.
As regards the intervention threshold, a very precise one has not been determined both for the great diffusion of the insect and for the great polyphagia, however following the flickering and any presence peaks, constitutes an important parameter for the timely detection of the first massive attacks.
Direct detection is also useful, which consists in careful control of the crop, especially in the early stages of development and in flight periods, to signal the first attacks on seedlings.
In this case, the intervention threshold corresponds to the presence of 1-2 3rd or 4th age larvae or 1-2 plants with detectable damage per square meter (up to the 8-10 leaf stage).
Fighting interventions can be carried out on vegetation or with poisoned baits, depending on the type of larvae present. In any case, the fight in the open field is carried out on young larvae that do not exceed 2 cm in length, with insecticides which, to be more effective, should be mixed with sugary products, such as molasses or sucrose.
The interventions must be carried out at dusk, in the presence of damp soil and with a lot of carrier liquid, to make the insecticide percolate also to the collar.
The poisoned baits are used instead against the already developed and buried larvae; these baits are also prepared with the addition of molasses or sugar and vegetable residues or bran. The baits should be distributed in the evening, with moist soil and placed in sectors and not across the board.