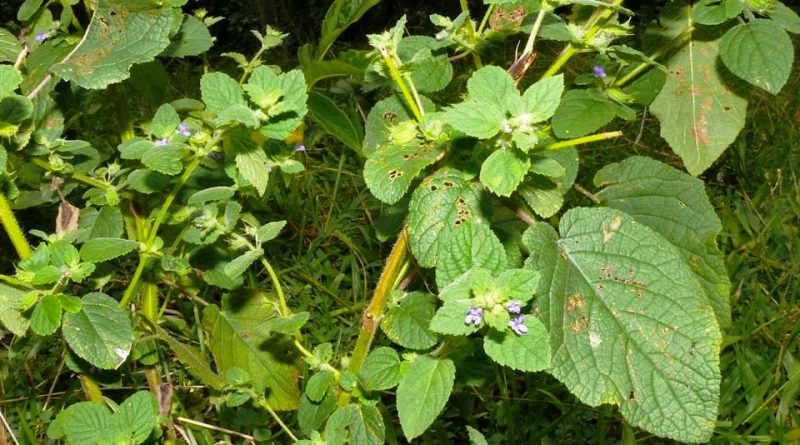 Etymology –
The term Hyptis derives from the Greek hyptos which alludes to the position of the lower lip of the flower facing backwards.
The specific epithet suaveolens comes from the Latin, from suavis sweet, pleasant and from oleo exhale smell, perfume: which gives off a pleasant scent.

Geographic Distribution and Habitat –
Hyptis suaveolens is a plant native to the tropical regions of central Mexico, the West Indies and South America, as well as being naturalized in the tropical parts of Africa, Asia and Australia.
The plant has spread in tropical and subtropical areas all over the world and in Australia it has become a weed on heavily grazed open forest areas.
Its habitat is that of monsoon forests and wet to dry woods and fields, often in hedges or wastelands, up to altitudes of about 1,600 meters. 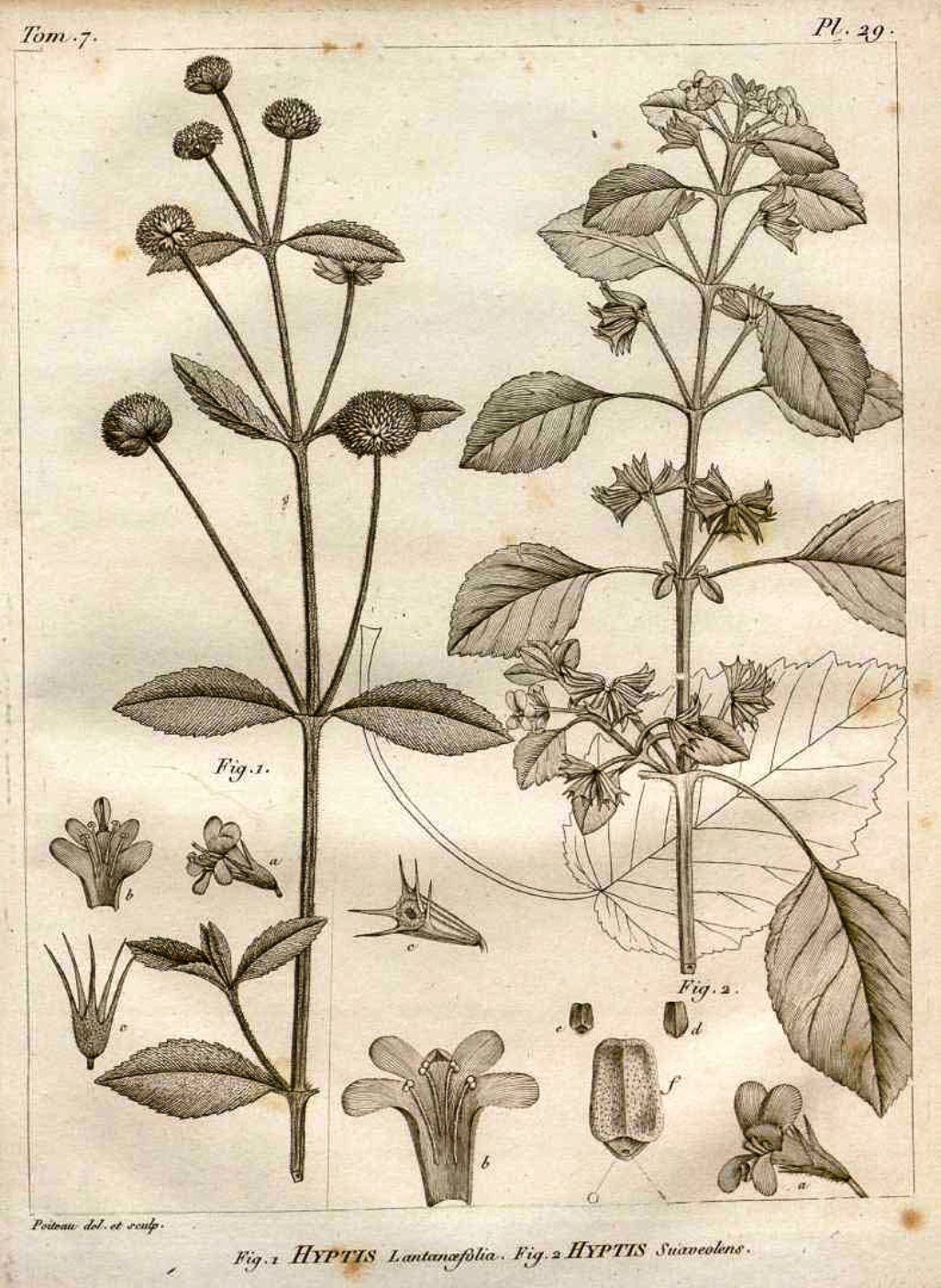 Description –
Hyptis suaveolens is a herbaceous, aromatic annual plant with an erect, branched, more or less hairy stem, 0.5 to 2 meters tall and with square stems.
The leaves are ovate, opposite, 4 to 9 centimeters long, pointed at the tip, heart-shaped at the base and toothed at the edges.
The flowers are long-stemmed, carried to the axil of the leaves. The calyx is hairy, about 4 millimeters long, but soon swells in the fruit up to about 1 centimeter in length, streaked with erect and rigid teeth. The corolla is blue, strongly zygomorphic, bilabiated; the stamens are 4, declined and about 8 millimeters long, with a flap of 5 millimeters in diameter.
The fruits have flat and mucilaginous seeds.

Cultivation –
Suob kabayo is a plant that forms abundant populations in the wild, often forming thick thickets of considerable extension that are very visited by birds when the seeds are ripe.
The plant begins flowering around 8-12 weeks, producing copious amounts of seeds, which can be spread by water, animals, humans and agricultural machinery.
The flowers are very attractive to pollinating insects.
The plant can flower and produce seeds all year round.
Plant propagation can be done by seed.

Customs and Traditions –
Hyptis suaveolens is a plant that is often harvested spontaneously and boasts a wide range of food and medicinal uses.
The plant is occasionally grown in Mexico and India.
The seeds are used in many parts of Central America such as those of Salvia hispanica. The seeds are larger than those of other Hyptis species and can be obtained in large quantities in places where plants abound by shaking the branches over a container.
When the seeds soaked are mixed or crushed in water, they form a drink with a pleasant taste and a mucilaginous consistency that is drunk a lot both at the table and at the refreshment counters. This drink is sometimes offered at the table in hotels.
The drink can be flavored with fruit juices.
The gelled seeds can also be prepared as a gruel or pudding.
The tips of the young shoots are added to foods as flavoring.
The leaves are aromatic and are used to make a mint flavored tea substitute.
In uses for medicinal use, a decoction is prepared from the roots which is appreciated as an appetizer. This plant is also used for affections of the uterus. A root decoction is said to be emmenagogue and stimulating when used in rheumatism.
The flowering plant is antifungal, carminative, febrifuge, gastric. It is used to treat a wide range of conditions including flatulence and other stomach problems, fevers associated with colds.
The juice of the leaves, mixed with lime juice, is drunk for stomach pains.
Applied externally, it is used as a wash or poultice for skin disorders such as dermatitis and eczema, boils, headaches, etc.
A poultice made from fresh, pounded plant parts is applied for snake bites.
The juice from the leaves is applied daily between the toes as a treatment for aches.
The leaf paste is applied to sores and fungal infections of the skin.
Furthermore, a high concentration of omega-6 lipids, present in the seeds, suggests that Hyptis suaveolens oil is an ideal product for dry and flaky skin.
In trials, the essential oil showed many promising properties including antibacterial and antifungal activity; plus better anti-inflammatory activity than sodium diclofenac, which is a standard commercial formulation.
The leaves contain about 0.025% of essential oils. The main constituents are spathulenol, 1,8-cineole and (E) –caryophyllene.
The oil is used medicinally and as an adulterant of patchouli oil (Pogostemon cablin (Blanco) Benth., 1848).
The essential oil has also shown insecticidal activity while the leaves are used as a bed bug repellent.

Preparation Method –
Hyptis suaveolens is a plant of which a bit of everything is used, both for food and medicinal uses.
The whole plant is used and must be harvested from April to June; after which it is washed, cut into pieces, compressed and dried in the sun.
As mentioned, it can be transformed into a refreshing drink by immersing the seeds in water and refrigerating the mixture. Some people add lemon or other citrus fruits to improve the taste. In Colima, Mexico, people use the seeds of this plant to make a traditional drink called “Bate”. The process consists of toasting and grinding the seeds and then mixing the resulting powder with water.