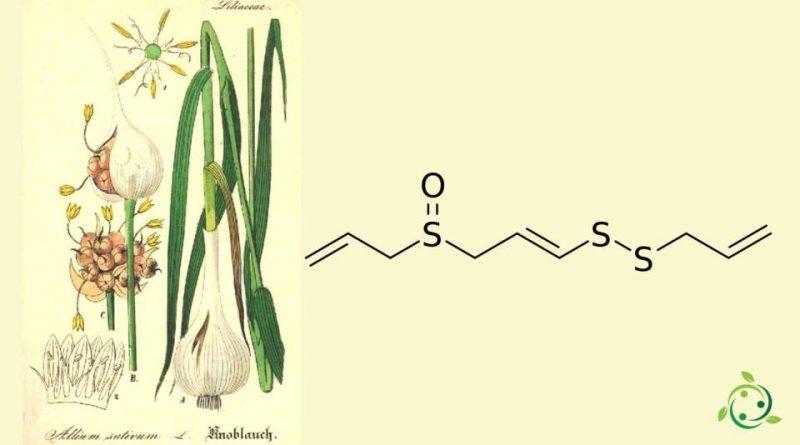 The ajoene, whose term in the official IUPAC nomenclature is: (1E) -3- (Prop-2-ene-1-sulfinyl) -1 – [(prop-2-en-1-yl) disulfanyl] prop-1- ene is composed of natural origin.
This compound has a brute or molecular formula: C9H14OS3 and is organosulfide present in garlic extracts (Allium sativum L.).
Physically it is a colorless liquid that contains sulfoxide and disulfide functional groups and is found as a mixture of up to four stereoisomers, which differ in terms of central alkene stereochemistry (E- vs Z-) and sulfoxide chirality of sulfur (R- vs S-).
Ajoene was first isolated in the laboratory in 1984.
This compound gives the garlic its characteristic smell and flavor which is released after crushing or finely mincing the cloves. The resulting formation of ajoene occurs when allicin dissolves in various solvents, including edible oils. The ajoene that forms in the garlic macerate is more stable and abundant.

According to some researches, ajoene has numerous properties that could justify its use in medicine.
It can act as an antioxidant, inhibiting the release of superoxides, as an antithrombotic and as an antiviral, especially against Vaccinia, Herpes simplex, Rhinovirus, human parainfluenza virus and the vesicular stomatitis virus.
Furthermore, ajoene in HIV infection seems to block viral processes dependent on integrins.
Furthermore, this compound has also shown antibacterial and antifungal activities and in particular in the infection with Candida albicans and Tinea pedis.
Further studies on ajoene have been carried out in its use in the treatment of acute myeloid leukemia, while it appears to reduce tumor size in basal cell carcinoma by inducing apoptosis, generally inhibiting the growth of tumors by acting on the microtubules of the cytoskeleton and by other mechanisms.
Research from 2012 showed that ajoene inhibits genes controlled by the quorum sensing system.