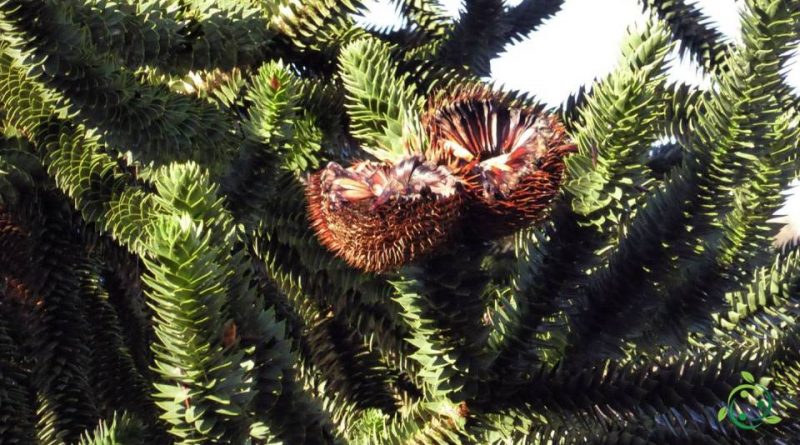 How the Monkey Puzzle Tree is grown

The Monkey Puzzle Tree (Araucaria araucana (Molina) K. Koch, 1873) is a conifer native to central Chile and central-western Argentina and is an evergreen tree up to 50 m tall, with a trunk with a maximum circumference of 2 m. this plant is considered the national tree of Chile.
The Araucaria araucana is however a fairly rustic and adaptable species, managing to grow up to Norway.
In South America it forms extensive and very open forests on the hills overlooking the Pacific (between 900 and 1800 meters above sea level); it was then introduced in Europe as an ornamental species at the end of the eighteenth century.
Araucaria araucana is a dioecious plant, with male and female sporophylls placed on different plants, although there are specimens with both. Male trees at the extremity of the upper branches produce axillary cones, at first patent and yellow-green, then pendulous, brownish-yellow, up to 20 cm long. Female trees produce large globose cones, about 12 cm in diameter, brown, which when mature (2-3 years) detach and fall.

Cultivation –
The Araucaria araucana is frequently found in parks and gardens due to its great adaptability and rusticity.
It is a cool climate plant for which the optimal cultivation temperature is between 12-18 ° C. if the plant is grown in warmer climates, an area with good environmental humidity should be ensured. The minimum temperature should not drop below 7 ° C.
The plant propagates by seed and the seeds are planted directly in pots or seedbeds between January-February in a substrate formed by fertile soil and coarse sand in identical proportions.
During germination it is advisable to keep the temperature around 15 ° C by keeping the soil constantly humid. After about one or two months the seeds will germinate and at that point it will be necessary to leave the new seedlings to strengthen and only when they are large enough to be handled with tranquility, can they be transplanted in their final position or in large pots if you intend to grow it indoors. .
As far as the open field transplanting technique is concerned, it is advisable to dig a hole of 0.40 x 0.40 x 0.40 where to place the mature manure at the base.
Once placed in the hole this must be covered and the ground compacted but without exaggerating to ensure the necessary ventilation.
Once the plant is freed it will have less need for irrigation, especially in wetter and less sandy soils, however, especially in the period from the end of April to September, an emergency irrigation every 10-25 days is useful.
As for pruning, as with other conifers, the araucaria does not require pruning, on the contrary, it may happen that a topped specimen to contain its development, can quickly deteriorate and die.