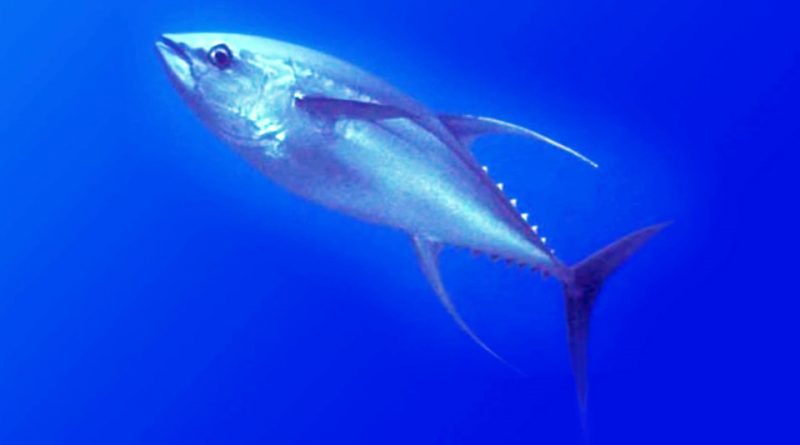 The albacore (Thunnus alalunga Bonnaterre, 1788) is a bony fish belonging to the Scombridae family.

Geographic Distribution and Habitat –
The albacore is a widespread fish in the Mediterranean Sea and in the warm waters of all oceans; on the European coasts it is rarely encountered further north than the Bay of Biscay. It is a cosmopolitan species of tropical and temperate waters.
It is common in the Italian seas, but only in certain locations which can still vary from year to year. Its presence is particularly massive around the Aeolian Islands, while it is rare in the Adriatic.
In the Mediterranean it is present along all the Italian coasts and in front of the Egyptian, Turkish and Greek coasts.
Its marine habitat is almost always deep sea and is rare off the coast. It migrates north in the warm season, during which it stays slightly less offshore.

Description –
The albacore is a fish very similar to the bluefin tuna, but smaller in size that reaches a length of 1.30 meters for 25 kg of weight, but the dimensions are generally less than about half as it has an average weight of 7 -8 kg, although in the Atlantic ocean it reaches 30 kg.
It is recognized for having a fusiform body, pot-bellied in the adult, covered with small scales. The corselet, which has larger scales, extends up to half the length. The lateral line, not very marked, has about 210 scales. On the sides of the caudal peduncle (very narrow) there is a robust keel between two small keels at the base of the lobes of the caudal. The head and eye are large.
The mouth is wide and reaches the height of the center of the eye, the jaws (almost equal) are equipped with a row of sharp teeth. Other teeth are found on the vomer and on the palatines.
The dorsal fins are two. The first has 11-14 spiny rays, of which the first 3 are much higher, and is quite extensive. The second (12-16 rays) is almost contiguous to the first and has a triangular shape with a pointed anterior lobe; it is short and is followed by 7-9 pinnules. The anal fin (11-16 rays) is opposite to the second dorsal and is similar in shape and extension; it is followed by 7-10 pinnules. The caudal is very broad, semilunar and with very narrow lobes. The ventral ones are small. The pectoral fins, very long, can reach the height of the second dorsal pinnula and are protected, in the upper margin, by a barely evident keel.
It has a steel-black blue dorsal color, the ventral whitish one. The dorsal pinnules and one or two of the post anal ones have a chrome-yellow central zone. The other pinnules are greyish. The posterior margin of the caudal is crossed by a thin white line.

Biology –
The albacore is a fish that reproduces in summer; eggs and larvae are pelagic and very similar to those of tuna.
This fish is pelagic and fast migratory and loves deep waters, which it almost never abandons, if not in the reproduction phase.

Ecological Role –
Thunnus alalunga generally feeds on fish, such as sardines, anchovies, sardines and flying fish, as well as cephalopods and planktonic crustaceans.
It is a gregarious fish that lives in large schools.
It is fished with purse seine nets and with special gill nets for the capture of stombrids (palamitare), or it is caught on hook with the trolling technique. This species is attracted by sprinkling water behind the stern of the boat. The flesh is pinkish white and not red; by some it is preferred to that of bluefin tuna, because it is leaner; it is also firm and flavorful. The meat is sold fresh and canned.