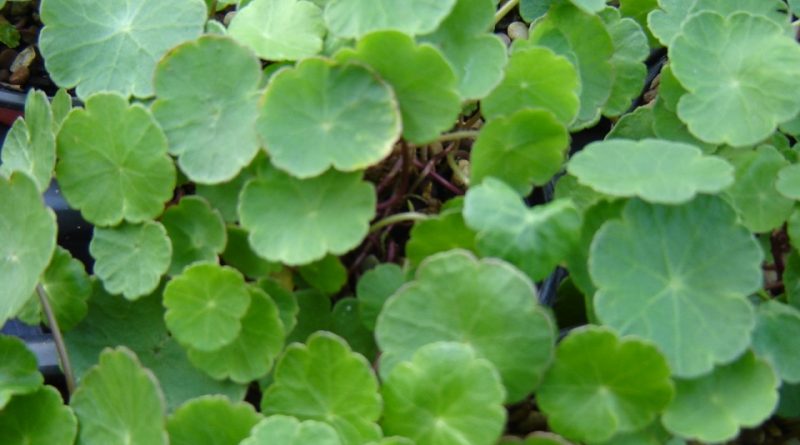 The Marsh Pennywort or common pennywort (Hydrocotyle vulgaris L.) is a herbaceous species belonging to the Araliaceae family.

Etymology –
The term Hydrocotyle comes from the Greek prefix ὕδρο- hýdro- relating to water and from κοτύλη cotýle small cup, cup: for the growth environment and the concave shape of the leaf blade.
The specific epithet vulgaris comes from vúlgus vulgo: very common, ordinary due to its widespread use, banal.

Geographic Distribution and Habitat –
Hydrocotyle vulgaris is a perennial plant native to northern Africa, Europe and the Caucasus and surrounding territories. It is present in Europe, including Great Britain, from Scandinavia in the south and east to North Africa, Greece and the Caspian Sea.
In Italy it is present in many regions but in sharp decline and now extinct over large areas. Its habitat is that of swamps, peat bogs, on the edge of pools, on humid muddy soils, from sea level to about 1000 m and generally on acid soils. 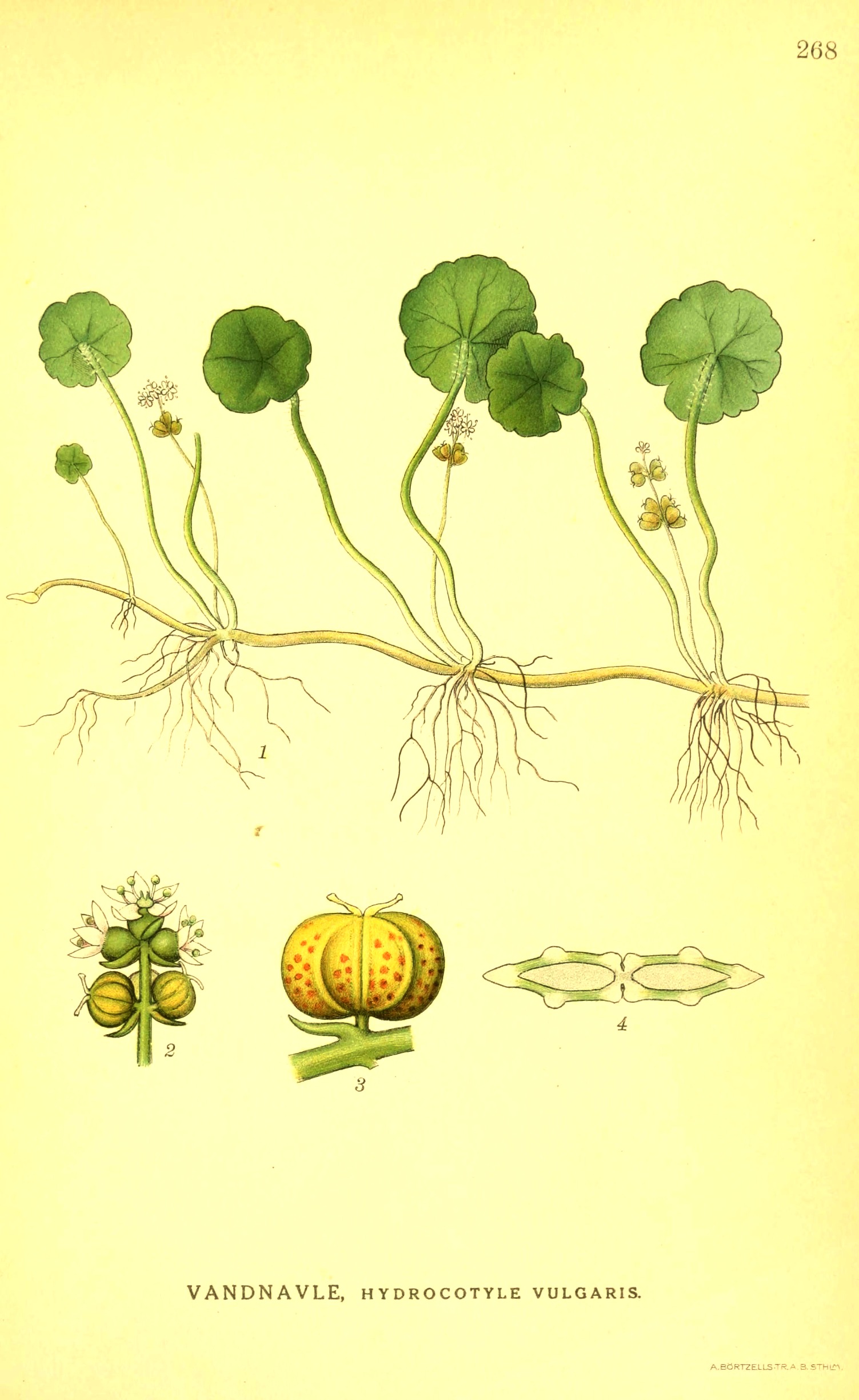 Description –
The Marsh Pennywort has a rhizomatous root that emits filiform and creeping underground stolons that rooting at the level of the nodes and in a short time cover vast surfaces of soil forming dense cushions 10-20 cm high, composed of a rich foliage.
The leaves are waxy, with the shape of a rounded cup with a crenate margin. They are inserted on the stems by means of long cylindrical petioles inserted in the center of the bright green lamina, from which the ribs radially branch out. The upper page is smooth while the lower one is cross-linked.
The flowers bloom rarely and when present are gathered in umbrella-shaped inflorescences carried by short peduncles; they are small, whitish-greenish in color and most of the time not visible because they are hidden under the leaves.
The antesis is in late spring, from May to July in regions with a temperate climate.
The schizocarpic fruit is an orbicular or ellipsoid polachenary, with a very short pedicel, corded at the base, laterally compressed, glabrous, with a diameter of 1.4-2.8 mm and a persistent style of 0.4-0.5 mm.
Mericarpi with triangular cross-section, yellowish, dotted with reddish-brown, with thin ribs, screws and non-existent carpophore. Seeds with woody endosperm.

Cultivation –
The Marsh Pennywort is a small perennial marsh plant that can be grown in humid soils, such as borders in lakes, ponds, directly in the water even in aquariums.
This plant prefers full sun exposure but also grows well in partial shade and in the shade. It resists the cold and the minimum winter temperatures between – 10 and – 15 ° C.
This plant reproduces mainly by rhizomes that grow better if submerged by little water in a muddy and slightly acid soil.
For the fertilization of this plant it is recommended to administer in the water a specific fertilizer for aquatic plants consisting of nitrogen, phosphorus, potassium, magnesium, and other micronutrients such as iron, manganese, boron, copper, molybdenum, zinc, useful nutrients that maintain I live the green of the leaves.
If these plants are grown in an aquarium or in small basins where there are fish or other forms of animal or plant life, it is advisable to take them with a slotted spoon or a net, move them for a short time in a container containing water and specific fertilizer and then rearrange them again in their home, always resting them on the surface of the water.

Customs and Traditions –
Hydrocotyle vulgaris is a plant that, in addition to growing in its natural state, can be grown for ornamental purposes in humid soils in full sun or partial shade, indoors or out, although it can also tolerate complete shade. It can also be grown as an aquatic plant in the mud at the side of a pond or garden or for aquariums.
This plant has been used both for medicinal purposes and for occasional food uses even if the news about it is few and fragmentary.
Among the edible uses it is known that the leaves can be eaten cooked and have a strong carrot flavor. However, their consumption must be limited.

Preparation Method –
Hydrocotyle vulgaris, as well as for ornamental purposes, even if marginally, is used for both medicinal and food uses, where the leaves are used.