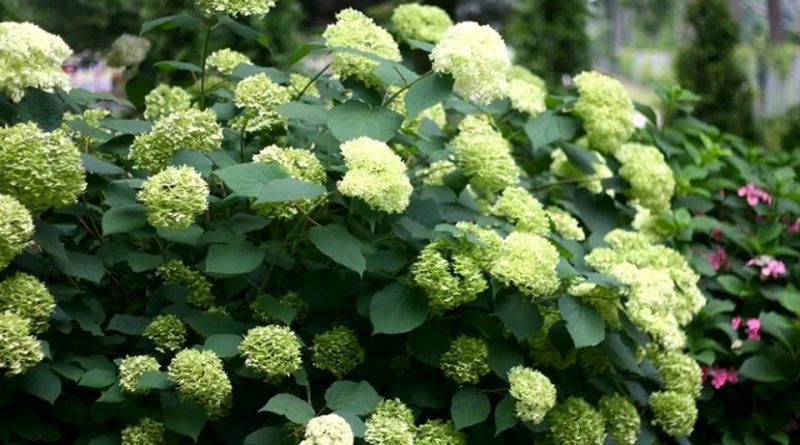 Etymology –
The term Hydrangea comes from the Greek prefix ὕδρο- hýdro- relating to water and from ἀγγεἴον angeíon vaso, casing.
The specific epithet arborescens comes from arbor tree: which tends to become a tree, shrub.

Geographic Distribution and Habitat –
Hydrangea arborescens is a plant native to the eastern United States and was the first hydrangea to be introduced in Europe, more precisely in England in 1736.
It is a widely distributed species in the eastern United States, from southern New York to the Florida region, from western Oklahoma to southeastern Kansas.
It is common in the Delaware River Valley and the Appalachian Mountains.
Its habitat is that of humid soils under the canopy of deciduous forest trees and is often common along the banks and streams of wooded roads. 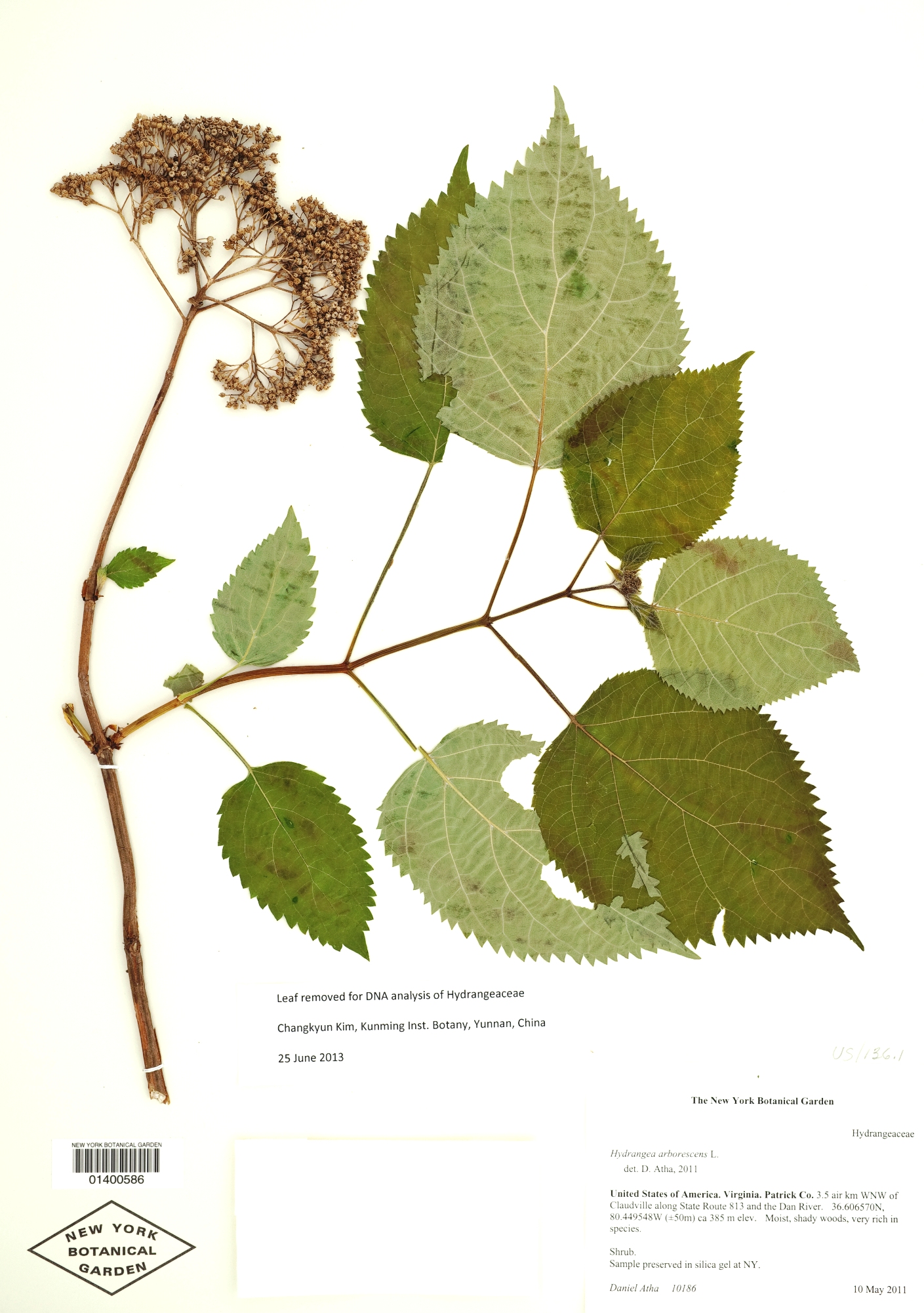 Description –
Hydrangea arborescens is a small and medium-sized deciduous shrub up to 3 m tall and with an upright habit.
The bark of the stem has a peculiar tendency to peel off in several successive thin layers with different colors.
The leaves are ovate and with a serrated margin; they measure from 8 to 18 cm in length, are opposite and deciduous. The lower leaf surface is glabrous or with inconspicuous fine hairs, green in color; the trichomes of the lower surface are limited to the central rib and the main veins.
The inflorescence is a corymb that starts flat and then swells up to obtain a globular shape of white color.
The flowers are mostly sterile, especially the external ones, for which they are replaced by sepals, large and petal-like, while the other floral parts are aborted.
The flowering period goes from mid-June until the first cold with a good scaling in the succession of flowers.

Cultivation –
Hydrangea arborescens is a plant that naturally grows mainly in humid soils but which tolerates most soils, including clayey ones, provided they have good drainage and also tolerate drought well. However, it grows best on very acidic soils with a pH around 4.5.
However, the plant requires an area with partial shade to grow better.
As far as propagation is concerned, this plant can be propagated by seed to be sown on the surface and in a cold greenhouse in the coldest areas or directly in the open field in spring in milder climates.
The transplantation of the formed seedlings should be carried out in late spring or early summer.
You can also prepare semi-mature wood cuttings, 8 cm long, to be planted in mid-summer. It is then advisable to have them overwinter in a greenhouse and then transplant them in the late spring following.
This plant can also be reproduced by leaf cuttings.
Furthermore, this plant can spread rapidly from the stolons to form large colonies.

Customs and Traditions –
Hydrangea arborescens is a plant often grown for ornamental use. Some cultivars have won awards in some states.
The flowers can be cut and dried to create compositions.
In addition to its ornamental purpose, this plant boasts a tradition for medicinal use.
The smooth hydrangea root was used in medicine by Native Americans and, subsequently, by the first settlers for the treatment of kidney and bladder stones but still today for these purposes in modern herbal medicine.
This plant is believed to encourage both the expulsion of stones and help dissolve any that remain.
The roots are antihelminthic, cathartic, diaphoretic, diuretic, emetic and tonic.
These faint are used in the treatment of kidney stones, irritation of the mucous membranes of the bladder, cystitis, nephritis, enlarged prostate and bronchial afflictions.
However, remember that excessive doses can cause dizziness and bronchial congestion.
Fresh roots are very succulent and cut easily, once dry they become very tough and resistant.
They are harvested in the fall and are best cut into short sections before drying.
The bark that is scraped off is used as a poultice on wounds, burns, muscle pains, sprains, etc .; it is also chewed in the treatment of stomach and heart ailments.
The leaves are cathartic, diuretic, sialagogue and tonic.

Preparation Method –
Hydrangea arborescens is a plant that, as a food and medicine, is mostly collected in nature for local use.
Fresh roots are harvested in the fall and it is best to cut them into short sections before drying.
The peeled branches and twigs were used to make tea.
The sprouts are peeled, boiled thoroughly, then fried and eaten.