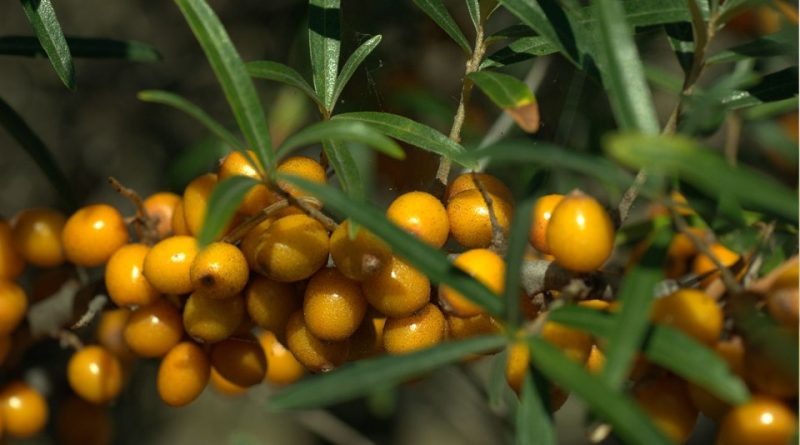 Etymology –
The term Hippophaë according to De Theis, Gentil and others comes from the Greek ἵππος híppos horse and from φάο pháo shine: because this plant was used as forage for horses (as Pliny quoted, but with a dubitative formula); for Gledhill and others instead from the Greek ἵππος híppos horse and from φένω phéno to kill: ἵππόφεως hippópheos is the name attributed by Theophrastus to a thorny plant; for Quattrocchi and Dave’s Garden, from an ancient Greek name for a thorny plant, perhaps an euphorbia.
The specific epithet fluviatilis comes from fluvius river, watercourse: of rivers or streams.

Geographic Distribution and Habitat –
Sea buckthorn is a plant distributed over a large range in Eurasia and at different altitudes. In Europe it is present up to Great Britain, from southern and eastern Norway to Spain and in Asia it extends as far as Japan and the Himalayas.
Its habitat is usually that near the coast, where it often forms thickets on fixed dunes and sea cliffs, river banks and terraces, dry river beds, forest edges, groves on mountain slopes, moraines, meadows at high altitudes. higher; at altitudes between 600 and 4,200 meters.
It is a pioneer species and also colonizes poor soils. It bears the wind, the intense cold and also lives in saline soils, near the sea, being halophyte. It is used to counteract the erosion of soils and coasts thanks to the root system and grows in sunny environments, it is heliophilous and does not fear drought. 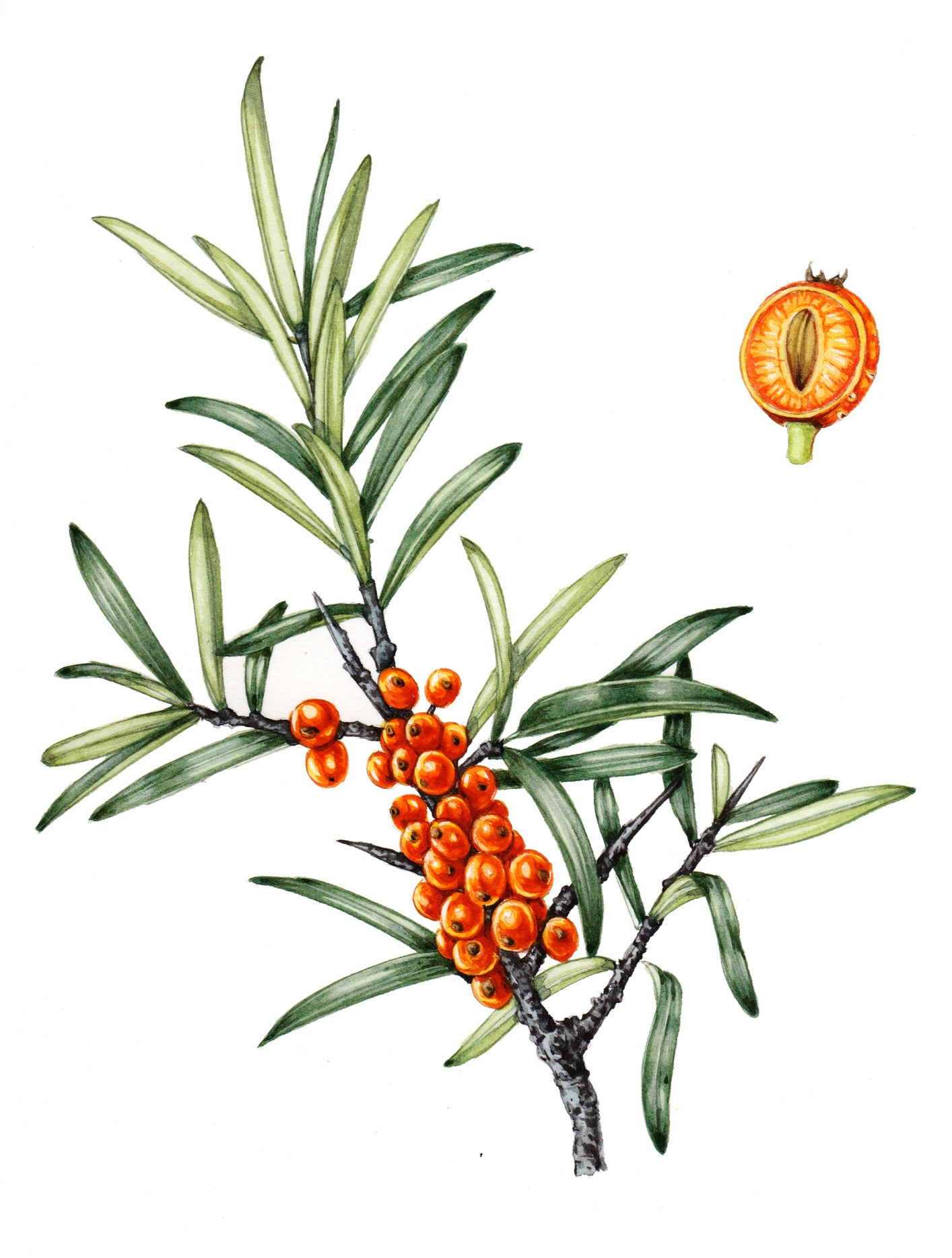 Description –
Hippophaë fluviatilis is a small shrub, broad-leaved and deciduous, with thorny branches and lanceolate, opposite, silvery green leaves.
It is a dioecious plant with male flowers and female flowers on different plants, only the latter produce the berries.
The flowers are small and yellowish green.
The fruit is an acrosarch of 4-8 x 2-6 mm, from obovate to subspherical, covered by an iron scale, juicy, acidulous, yellow-orange, with an endocarp (achene) of 3.5 x 2.5 mm.

Cultivation –
Hippophae rhamnoides is a very cold-resistant plant, able to tolerate temperatures down to about -25 to -35 ° C when completely dormant.
It is an easy-to-grow plant that requires, however, a sunny position: the seedlings cannot grow in a shaded position and mature shrubs die quickly if they are placed in the shade of taller plants.
It grows well in very sandy soils, although it can adapt to most soil types, including poor ones, as long as they are not too dry.
It grows well in environments with water and in fairly humid soils but the adult plants and with formed root systems are very resistant to drought.
The plants are very wind resistant and tolerate marine exposure.
It is a fairly slow growing plant.
This plant is also grown as a very ornamental plant and is occasionally grown, especially in northern Europe, for its edible fruit.
This species has a symbiotic relationship with some soil bacteria, these bacteria form nodules on the roots and fix atmospheric nitrogen. Some of this nitrogen is used by the growing plant, but some can also be used by other plants growing nearby.
Propagation can take place by gamic or agamic way.
In the propagation by seed this should be done possibly in a sunny position in a cold greenhouse. Germination is generally quick and good although 3 months of cold stratification can improve the germination rate. Alternatively, the seed can be sown in a cold greenhouse as soon as it is ripe in the autumn period. The transplant must be done in late spring in their permanent positions. The male seedlings, in spring, have very prominent axillary buds while the females in the same period are clear and smooth.
Plants usually produce abundant suckers, especially when grown on sandy soils.
Propagation can also be carried out starting from cuttings; in this case, half-ripened wood cuttings can be used, in the period of early summer – July.
Even if the rooting is not high, it is the simplest method of vegetative propagation.
You can also start from mature wood cuttings in autumn, and in this case the cuttings should be taken at the end of the autumn period or very early in the early spring before buds form.
The cuttings must be placed in a substrate of sand and peat, until mid-spring, they must have a size of 7 – 9 cm and planted in a greenhouse.
Rooting should take place within 2 months, after which they can be placed in their permanent positions in the autumn period.

Customs and Traditions –
Hippophaë fluviatilis is a plant with a wide use, both in the food field, in medicine and for the use of various parts for various purposes.
This plant has risen to prominence as a food and medicine since the 1970s, being particularly popular for its nutrient-rich fruits.
It is often grown to provide fruit for making juices, etc .; moreover it is a pioneer species in the stabilization of the woods, of the soil and also as an ornamental and hedge plant.
Among the edible uses it should be remembered that the fruits can be eaten both raw and cooked; these are succulent and aromatic even though they are too acidic when raw for most people’s tastes.
Fruit becomes less acidic after a frost or when cooked.
However, the greatest use is for the production of fruit juices as they are rich in vitamins and have an attractive aroma. The fruits can also be used in many ways where the juice is used in salads, smoothies and various cooked dishes.
The fruit is very rich in vitamin C and vitamins A and E; moreover the fruits of some species and cultivars contain up to 9.2% of oil.
The fruit in addition to vitamins contains flavonoids and other bioactive compounds.
In detail, it contains carotenoids, antioxidants, vitamins, minerals, polyphenols and phytosterol; it is the richest source of natural omega 3, 6 and 9 fatty acids along with the rarer omega 7 fatty acids. The berry is a source of omega-7 fats and has, as mentioned, a high content of vitamin C, higher than that of citrus fruits and vitamins A and E.
The fruit It is studied as a food able to reduce the incidence of cancer and also as a means to stop or reverse the growth of tumors. Juice is also a component of many vitamin-rich medications and cosmetic preparations such as face creams and toothpastes.
As far as medicinal uses are concerned, it should be emphasized that the twigs and leaves contain 4 – 5% of tannin; they are astringent and vermifuge.
The tender branches and leaves contain bioactive substances that are used to produce an oil that is distinct from the oil produced by the fruit. Yields of about 3% of this oil are obtained which is used as an ointment for the treatment of burns.
The high quality medicinal oil produced from the fruit is instead used in the treatment of heart ailments; it is also said to be particularly effective when applied to the skin to treat burns, eczema and radiation injuries, and is taken internally in the treatment of stomach and intestinal diseases.
The juice of the fruit, freshly squeezed, is used in the treatment of colds, fevers, fatigue, etc.
The seeds contain 12-13% of a slow drying oil.
A yellow dye is obtained from the fruit, stems, root and foliage.
A blackish-brown dye is obtained from young leaves and shoots.
The heartwood is brownish-yellow; sapwood is yellow. The wood is fine-grained, hard, rather hard, heavy, very resistant. It is used for fine carpentry, turning, etc .; it is also used as fuel and coal.
With its thorns, this shrub can be used to form defensive and impenetrable inter-farm hedges, at the borders of the plots.
Given the plant’s resistance to the cold climates of the northern hemisphere and its presence in regions where other sources of vitamin C were not always certain, in the past its fruits were considered precious and almost miraculous, especially if stored and consumed in the case of insidious pathological manifestations due to deficiency of micronutrients and vitamins in the winter months.

Preparation Method –
Of the Hippophaë fluviatilis fruits are used that are eaten both raw and cooked; However, the greatest use is for the production of fruit juices as they are rich in vitamins and have an attractive aroma. The fruits can also be used to make salads, smoothies and various cooked dishes.
A decoction can be prepared from the fruits that is used as a cleanser to treat irritation and skin rashes.