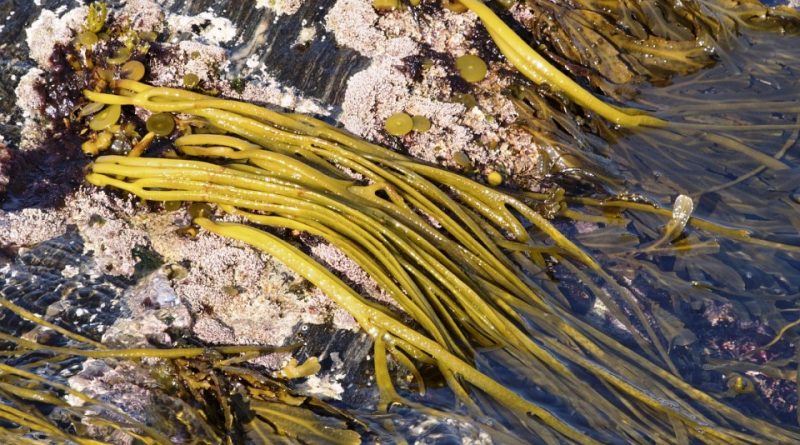 The Thongweed or Sea Thong (Himanthalia elongata (Linnaeus) S.F. Gray) is a brown seaweed belonging to the Himanthaliaceae family.

Etymology –
The term Himanthalia is of unknown origin.
The specific epithet elongata is the participle of elongo elongate: elongated compared to congenital species.

Geographic Distribution and Habitat –
Himanthalia elongata is an alga that lives in the Baltic Sea, the North Sea and the north-eastern Atlantic Ocean, from Scandinavia, through Ireland and south to Portugal.
Its habitat is that of the slightly sloping rocky coasts in the lower littoral area and in the sublittoral area, in particular on the coasts with moderate exposure to waves. Sometimes it is abundant and forms a distinct zone just below the Fucus serratus zone. 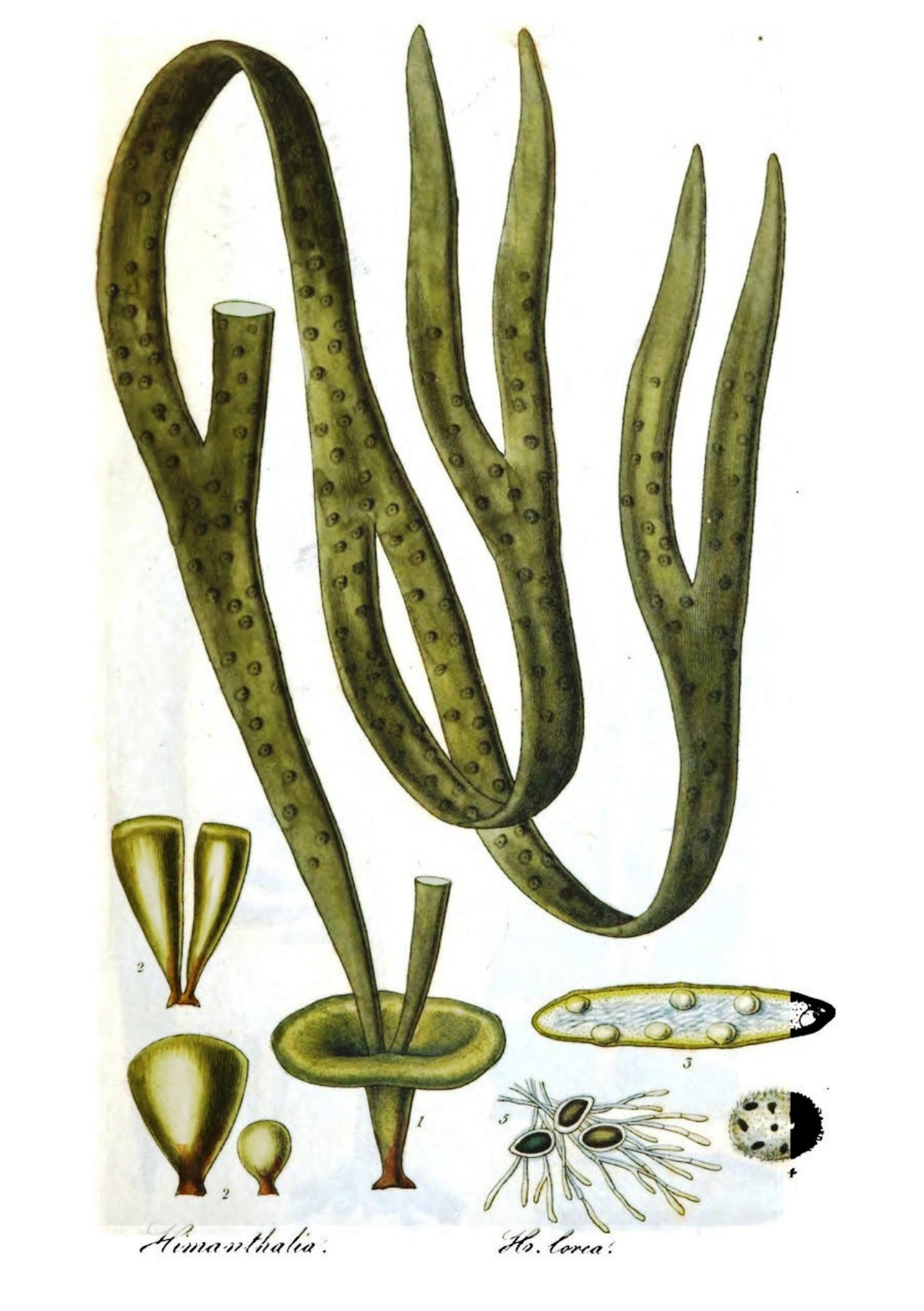 Description –
Himanthalia elongata is a common brown alga.
The thallus is initially a small flattened or spaghetti-shaped disk up to three centimeters wide with a short peduncle and is formed during the autumn. From here branch off long string-shaped fronds that begin to grow rapidly between February and May, reaching a maximum length of 2 meters. The implant releases gametes from June until winter when it begins to decay. Plants commonly live for 2-3 years and reproduce once before dying.

Cultivation –
Himanthalia elongata is usually harvested in the summer season when the plant has already reached a sufficient stage of ripeness. The ideal habitat is made up of gentle slopes along the rocky coasts between the lower littoral area and the sublittoral area, in particular on the coasts with exposure to a moderate wave motion.

Customs and Traditions –
In the countries of the United Kingdom, Himanthalia elongata is better known by the name of Thongweed or Sea Thong.
These algae draw an incomparable wealth of mineral salts and bioavailable trace elements from the marine environment: potassium, magnesium, iron, copper, zinc, phosphorus, sulfur, selenium, manganese. There are also good amounts of iodine, which contributes to the optimal functioning of the thyroid and stimulates the body’s basal metabolism.
In particular, among all marine algae, they are characterized by a very high presence of vitamin C which concentrate up to 6 times more than oranges.
The antioxidant properties do not stop there, in fact these algae are particularly rich in carotenoids: fucoxanthin, beta-carotene, xanthophylls and violaxanthin.
The amino acid composition is interesting from a nutritional point of view; in fact it contains valine, lysine, phenylalanine, isoleucine, leucine, threonine, methionine.
They also contain several polysaccharides: alginates, fucoidans and laminarine. These polysaccharides are not completely digested by human intestinal bacteria, therefore they can be considered as dietary fiber.
This seaweed contains 18 gr of Fucoidans and 16 gr of Alginic Acid per 100 gr.
From a nutritional point of view, this seaweed, with its intake, contributes to the supply of Potassium, a mineral salt of which it is particularly rich; this counteracts the body’s tendency to retain liquids. When the amount of sodium is higher than that of potassium, the body tends to retain liquids. Only when in the daily diet the amount of potassium ingested is at least double that of sodium, the excess fluids are released (drainage) and in a few days it is possible to obtain a weight loss. The tissues deflate and the body appears drier and more toned.
Due to its characteristics, Himanthalia elongata is recommended for those who practice sports, both at an amateur and professional level. Thanks to the presence of alkalizing mineral salts, it rebalances metabolic acidosis altered by prolonged physical exertion. It has a buffering action against metabolic acidosis induced by intense sports activities, and increases the alkaline reserve in the blood.
Furthermore, since Himanthalia elongata is particularly rich in alginic acid, if taken regularly, it promotes the detoxification of the body. Catabolites, metabolic residues, waste substances produced by the body but also substances ingested with food such as pesticides, chemical residues, heavy metals, potentially toxic and harmful substances, are eliminated thanks to water exchange, intestinal drainage and chelation.
Himanthalia elongata also modulates the immune system, stimulates the production of immune cells, strengthening the body’s defenses against bacteria and viruses. Effectively modulates the immune system in the case of allergies. It enhances the body’s natural defenses by acting as an immunomodulator, it is useful in strengthening the immune defenses without the risk of increased inflammation. It is also particularly useful in case of inadequate lifestyles, incorrect eating habits, prolonged drug therapies.
Himanthalia elongata is also a balanced dietary source of iodine; contributes to the positive daily balance of this essential element for the body. In particular it is useful in the regimes of the Vegetarian and Vegan diet. This seaweed contains the essential amino acid L-Lysine which is particularly useful in vegetarian diets, based only on cereals. However, supplementation with this amino acid can be useful in particular conditions ranging from the need to balance the deficiencies of a vegetarian diet, therefore low in Lysine, to that of equalizing the increased need in particular conditions.
Among the contraindications, it should be remembered that occasionally feeding on marine algae generally does not involve any contraindications.
However, we do not recommend a continuous intake, even of small quantities, for hyperthyroid subjects or those who have experienced allergies to fish, crustaceans and molluscs or forms of hypersensitivity to iodine. The use of all seaweed is also not recommended for people suffering from severe kidney diseases.

Preparation Method –
Himanthalia elongata is collected and processed industrially and formulated in various preparations, especially in tablet form, with other excipients such as microcrystalline cellulose, magnesium stearate or more.