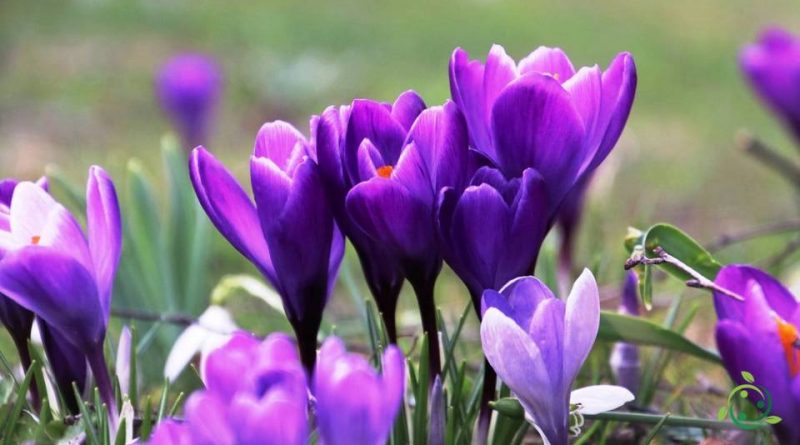 True saffron or, simply, saffron (Crocus sativus L.) is a plant of the Iridaceae family, cultivated in Asia Minor and in many countries of the Mediterranean basin. The word saffron comes from the Arabic word za῾farān.
In Italy the most extensive crops are found in the Marche, Abruzzo, Sicily and Sardinia but it is also grown in Umbria, Tuscany, Basilicata and Calabria.
Its cultivation, even if limited to small areas, is spreading in various regions, thanks also to the recognition of some designations of origin.
The cultivation technique of saffron foresees the deep and accurate working of the soil and a good organic and mineral fertilization; for the details of this technique, refer to the specific sheet while here the multiplication technique will be described.

Multiplication –
For the planting of saffron cultivation, the month of August or early September must be chosen, in any case before the summer ends, because with the end of the hot season the corms emit the spathe and begin to vegetate.
In summer, the bulbs are taken from previous crops, which are cleaned and transplanted.
The bulbs of the crocus sativus are placed in the ground at about 10 cm deep but you can also reach 14 if you want to do a multi-year crop.
As for the distance from bulb to bulb, it is recommended that about 10-12 cm between the plants in the case of a multi-year plant, which can be reduced if you practice annual cycle cultivation. Generally, rows 20 cm apart are used. If the bed is made, 2 or 4 rows can be placed on each raised pallet depending on the width of the porches.

Collection and storage –
The collection of saffron flowers must be carried out from mid-October to mid-November; this must be done in the morning before they hatch. The stigmas are taken from the flowers and placed in special dryers for roasting. Production can reach 10-15 kg / ha.
Use in the kitchen and therapeutic properties –
Saffron is a spice known for its uses in the kitchen as it is one of the best known condiments that is used to flavor and color many recipes, including the famous Milanese risotto.
It is also used in liquor. It is often replaced with some substitutes (false saffron) which have the same coloring power but lack the characteristic aroma of true saffron.
However, this plant also has therapeutic properties: aperitifs, digestives, stimulants, emmenagogues.