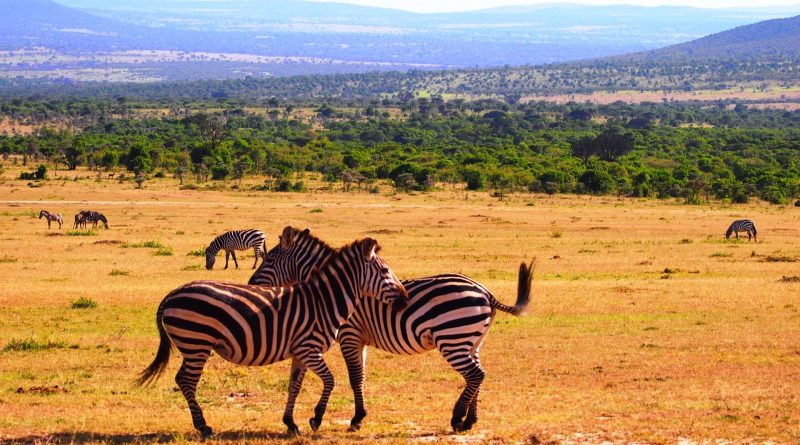 Kenya is an East African state that borders Ethiopia and South Sudan to the north, Tanzania to the south, Uganda to the west, Somalia to the north-east and the Indian Ocean to the east.
Kenya has an area of ​​582,650 km² and a population of 54,727,751 inhabitants.
Nairobi is its capital and largest city with 4,500,000 inhabitants (2007).

Geography –
The geography of Kenya is quite complex. Kenya is a country in East Africa, and is crossed by the equator. Despite being an equatorial and tropical country, it has very varied climates. In the north there are desert areas, and in the south central plateaus, with forests and savannas. The country is crossed by long mountain ranges. Overall, the morphological element that most characterizes Kenya is the Rift Valley, which crosses it from north to south. The inland waters have fresh and salt water lakes; there are also numerous boraciferous dandelions and geysers. On the other hand, there are few rivers, of which only two have a noteworthy flow and length (the Tana and the Galana).
The coastal strip, over 400 km long, is followed by a region of arid and steppe plateaus; the central one, which rises to altitudes between 1 500 and 3 000 meters, is divided by the fracture of the Rift Valley which develops from north to south and which forms the basin of Lake Turkana (or Rodolfo). On the sides of the Rift Valley rise imposing volcanic massifs, the largest of which is Mount Kenya (5199 m), one of the highest mountains in Africa and Kilimanjaro (5358 m) on the border with Tanzania. The plateau slopes down to the west, near Lake Victoria, and to the north where the territory of Kenya is occupied by a large desert plateau.
As far as the hydrographic network is concerned, there are two main rivers: the Tana and the Galana, which pour their waters into the Indian Ocean and have a very variable regime throughout the year, depending on the frequency of rainfall. The largest lake in the country is the Turkana, since only a small portion of Lake Victoria belongs to the territory of Kenya; Lake Turkana has brackish waters and numerous islands emerge.

Climate –
The climate of Kenya is very hot and humid, especially in the coastal regions, and becomes milder and drier in the heart of the country, in relation to the altitude.
The rains are concentrated in two periods of the year: from March to May the heavy rains, while from October to December the rains are intense but short. The dominant environment is that of the savannah, protected by numerous natural parks that cover about 10% of the national territory. On the slopes of the mountains and along the rivers there are traces of the original rainforest; while in the north, in the less rainy areas, the savannah fades into the desert. The savannah is the habitat of large herds of herbivores (antelopes, gazelles, giraffes, buffaloes, zebras, elephants) and their predators (lions, leopards and cheetahs). Hippos and crocodiles live in the waters of lakes and rivers. 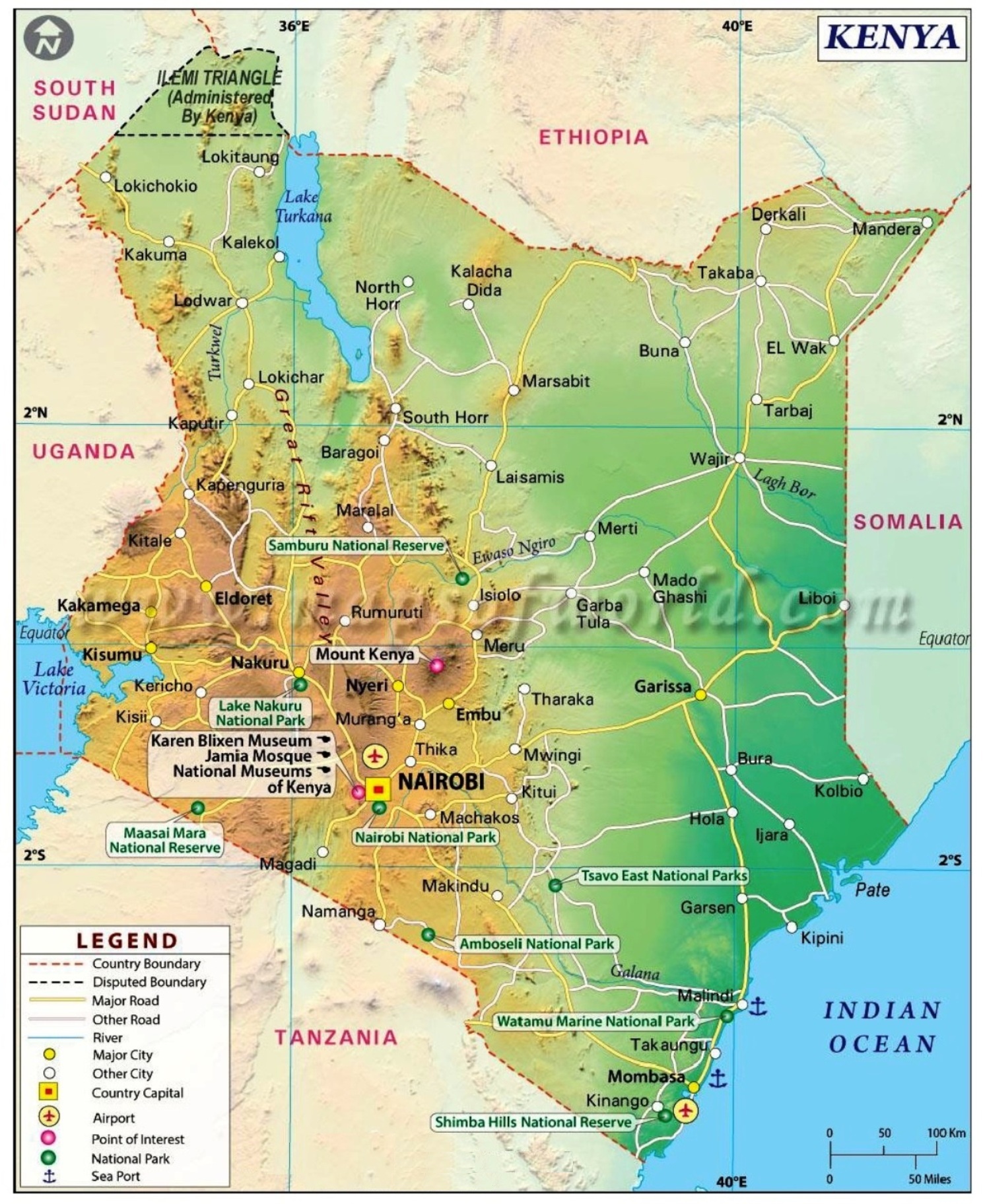 Fauna –
Kenya is still today a land where the greatest number and the greatest variety of animals are found.
The biggest are the Big Five: Elephant, Rhinoceros, Lion, Buffalo and Leopard.
Large mammals also include the Cheetah, the “cousin” of the Leopard.
Another large mammal is the Hippo. It is the second largest land animal in terms of size. It can reach the weight of 2 tons.
The animal that most and best excites the children’s imagination is the Giraffe. There are three main species: the Masai giraffe (lives in southern Kenya and Tanzania), the reticulated giraffe (lives in northern Kenya) and the Rothschild’s giraffe (lives in western Kenya and northern Uganda). The giraffe has the longest (black) tongue of all mammals, which can reach up to 45 centimeters.
The Zebra is seen throughout East Africa. She is always very active; during the day it moves, at night it rests. The zebra is able to digest even the heaviest foods. In fact, therefore, it also survives where other animals find nothing to eat.
The bush-filled savannah found in this part of Africa is home to the most extraordinary variety of Antelopes in the world. There are about 30 different species ranging from Eland (the largest) to Dik-dik.
The little cats are all more or less the evolution of the mythical tawny cat of Egypt and are the African Golden Cat, the Sand Cat, the Caracal, the Serval or African Leopard. They weigh 2 to 3 pounds, with a poor sense of smell, boast exceptional hearing and excellent eyesight. Carnivores, they feed on small prey.
The Canidae family includes small carnivores related to the dog.
They are essentially two species of Jackals: the Striped Jackal and the Black-backed Jackal.
Another very common canid is the Otocione.
Among what are called the gregarious hunters, the largest is the African wild dog. Hunting in packs preying on Antelopes, Zebras, Gazelles and Gnus.
The predator par excellence, however, is the Hyena, included in the Hyenidae family, which has one of the strongest jaws. It manages to devour the bones of its victims. It is divided into two groups: the spotted hyena and the striped one. They generally pounce on the remains of animals that are victims of other predators. The hyenas are content to finish the remains of the carcasses.
Among the small mammals can be classified carnivores, herbivores and a good number of omnivorous monkeys.
The Mustelidae family includes in particular the Weasels and the African Otters. They inhabit woods, bush and grassy areas. They boast a wide repertoire of vocal sounds and repel enemies thanks to a repellent odor that they can produce from the secretion of their anal glands.
Mongooses are mammals representing the Herpestidae family and belonging to the order of carnivores. They live in groups, they are quick and agile in their movements, they move in the bush showing off their vocal skills. Their best way of defense is to take cover in the nearest holes to avoid the aggression of the largest carnivores.
Hyraxes or Procavias are the closest relatives of elephants. Although they are tiny specimens, they share a series of similar characteristics with elephants: claw-forged nails that are actually hooves; two breasts located between the lower limbs; internal testicles; a gestation of seven months.
Baboons are the largest specimens in the Cercopithecidae family. They are robust monkeys, with a round head and protruding snout. They live in groups and, as with many other animals, females are the fundamental element. Only one male is the leader of the group. He is the one who has the task of mating. The most common species in this area of ​​Africa is the gray-green Cercopithecus. Agile, slender with a long tail, lives in a group. Gifted with excellent eyesight, he also boasts exceptional hearing, while possessing a poor sense of smell. This type of vervet is omnivorous: it eats everything from flowers to herbs, but also insects, reptiles, birds and eggs.
In Kenya, as many as 1100 different species of birds have been identified to date (click on the link and see: “Kenya Birdwatching”, “Kenyan Birds” and “Kenya – Les oiseaux”), so you can understand entire region hires for ornithologists. The diverse habitat made up of many different elements allows this region to offer birds an excellent environment.
It is estimated that around 6,000 million birds migrate to Africa each year. There is no winter or summer in East Africa. The temperatures remain more or less the same. The only difference is in the humidity. And birds instinctively know when to stop or leave. Along the coast, the tropical climate allows birds to find food easily.
The three-toed sandpiper, the small curlew, the large Corriere, the Voltapietre, the Pantana, the African oystercatcher, are some of the migratory species that return to the north in spring to reproduce.
Among the sedentary breeds, the Gray Heron, the Mangrove Kingfisher, the Night Heron are the protagonists of a truly fascinating ornithological scene.
Eight species of storks live along the rivers which delight in the most diverse prey with their enormous beak.
The other great bird of sure charm is the Eagle. With its majestic flight, the wingspan alone is enough to instill in the observer a sense of respect that comes very close to fear. The rapacious eagle, the martial eagle, the Wahlberg eagle feed on small mammals, Pharaoh, Francolini, while they go to drink.
Among the lake birds, you can observe the whole series of Pelicans and Flamingos, especially the pink ones. In the category of lowland birds there are the Larks, the Dancers. Among others, the terrible African Marabou stands out, a scavenger that, like the Vultures, is attracted by the carcasses of dead animals and by landfills.