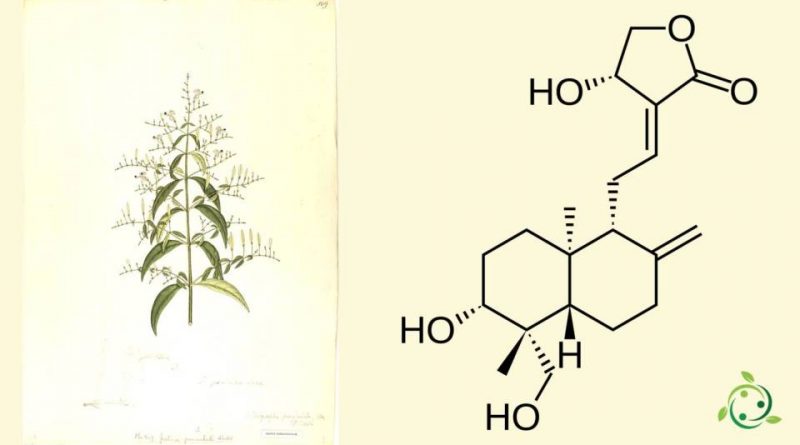 Andrographolide, whose term in the official IUPAC nomenclature is: 3- [2- [Decahydro-6-hydroxy-5- (hydroxymethyl) -5.8a-dimethyl-2-methylene-1-naphthalenyl] ethylidene] dihydro-4 -hydroxy-2 (3H) -furanone is a diterpene lactone isolated from the stem and leaves of the Indian Echinacea (Andrographis paniculata (Burm.f.) Wall. ex Nees) an annual herbaceous plant of the Acanthaceae family, native ‘India and Sri Lanka.
Also called, this plant helped to eradicate the flu epidemics that broke out in India in 1919. In Chinese phytomedicine, Chuan Xin lian is prescribed against fever and respiratory tract infections. Andrographis is part of the Chinese Pharmacopoeia (1997 Ed.) And is currently used in Scandinavia to relieve common cold symptoms.
Andrographolide has a brute or molecular formula C20H30O5 and is an extremely bitter substance commonly used in Ayurvedic medicine to combat dysentery, hepatitis, herpes, skin infections and snake bites.
Andrographolide has been studied for its effects on cellular immunomodulation and stroke. The study showed that andrographolide can bind to a spectrum of protein targets including NF-κB and actin by covalent modification.