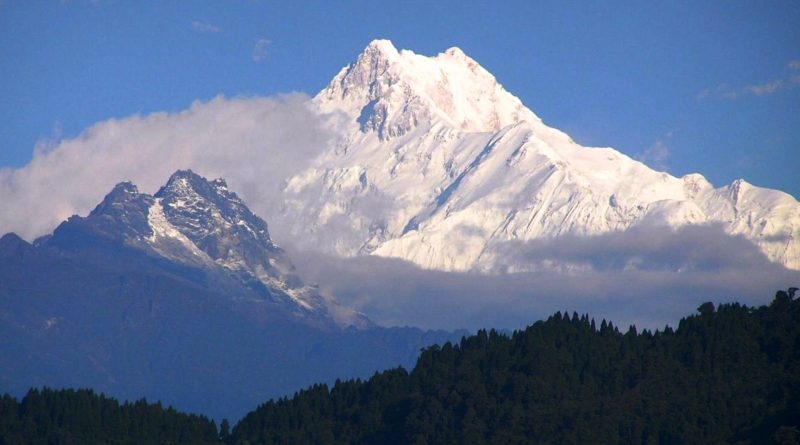 Kangchenjunga is, in order of height, the third highest mountain on Earth. This peak has an elevation of 8586 m a.s.l. and is located on the border between Nepal and the Indian state of Sikkim.
Kangchenjunga is, therefore, the highest peak in India, the easternmost of the eight thousand in the Himalayas and, from 1838 to 1849, considered the highest peak on the planet, until British surveys ascertained that Everest and K2 were higher .
The etymology of the name Kangchenjunga is uncertain and controversial, but it is believed that it is the translation “five coffers of the great snow” with reference to the five peaks that make up the massif.
In fact, Kangchenjunga consists of five peaks which, in descending order, are:
– Cima Principale, to the north, 8,586 m;
– Cima Ovest or Yalung Kang, 8.505 m;
– Cima Centrale, 8,482 m;
– Cima Sud, 8,476 m;
– Kangbachen, 7,902 m.
The Kangchenjunga is characterized by its pyramidal shape, with two trapezoidal faces and two opposite triangular ones. The summit ridge is about 1.5 km long, from north-west to south-east. It is bounded on the north by the main peak, on the south by the south peak and in the middle there is the central peak.
Two ridges branch off from the main peak to the north:
– the west ridge, along which is the West Col, the west peak (Yalung Kang) and the Kangbachen;
– the north ridge, connected to the North Col, and from which a secondary ridge branches off which proceeds eastwards.
The other two ridges branch off from the south peak:
– the south-west ridge, connected to the South Col;
– the south-east ridge.
The border line between Nepal and India passes through the north ridge, the summit ridge and the southwest ridge.
Even the walls, like the ridges, are four:
– southwestern face, Nepalese, overlooking the Yalung glacier and at about 7,500 meters it forms a sort of plateau called the Great Shelf;
– north-west face, Nepalese, on the Kangchenjunga glacier and on the Ramtang, beyond the Kangbachen;
– south-east face, Indian, on the Talung glacier;
– north-east, Indiana, on the Zemu glacier.

Geography –
The Khangchendzonga National Park was established around the Kangchenjunga massif, which is located in the northwestern area of ​​the Northern Sikkim District, in the Indian state of Sikkim, on the border with Nepal and China. This is one of the few high-altitude Indian national parks. To the north it borders the Qomolangma nature reserve in Tibet, while to the west it borders the Kanchenjunga conservation area in Nepal.
Khangchendzonga National Park is a protected area of ​​the Northern Sikkim District, India, established in 1784 and included in the UNESCO World Heritage List in 2016, becoming India’s first “mixed” heritage. It is part of the worldwide network of biosphere reserves.
There are several glaciers in the park, the largest of which is the Zemu Glacier.

Flora –
On Mount Kangchenjunga the vegetation and fauna present, as you rise in altitude, become more and more sparse until they disappear completely. Downstream, however, the vegetation of the includes plants typical of temperate forests, such as oaks, firs, birches, maples, willows, etc. There are also alpine meadows and shrubs at higher altitudes, with the presence of a large number of medicinal plants.