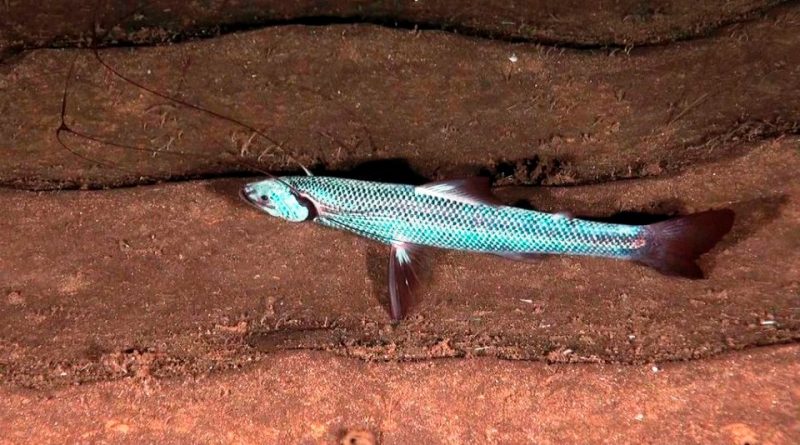 The Mediterranean spiderfish (Bathypterois dubius Vaillant, 1888) is an abyssal fish belonging to the Ipnopidae family.

Geographic Distribution and Habitat –
The Mediterranean spiderfish is a fish endemic to the Mediterranean and also found in the eastern Atlantic to the northwestern Atlantic.
In the Italian seas it is known in the Tuscan Archipelago and in the Ionian Sea but it is not common, but perhaps only because of the inaccessibility of the seabed it frequents.
It is a benthic species that lives at depths varying between 300 and 2000 meters.

Description –
The Bathypterois dubius is a fish characterized by an elongated, fusiform body, with thin, cycloid and adherent scales and with a total length of about 260 mm.
The head is small and depressed and broad on its dorsal side. The eyes are very small, but well formed. The nostrils are not very visible, close together.
It has a wide mouth and very extended maxillary posteriorly. The lower jaw is prominent. The teeth are tiny and arranged in narrow strips in both jaws and partly also on the sides of the large ploughshare.
Spines exist on all gill arches, they are long and serrated, particularly those of the first arch.
The dorsal fin (14-16 rays) is approximately equidistant between the tip of the muzzle and the base of the tail.
The anal fin begins behind the end of the dorsal and the tail fin is broad and the rays of the lower lobe may have various modifications and their ends may be spatulate or thickened to a cushion. The pectorals are divided into two parts, the two upper rays are adherent and separate only after the end of the dorsal. The ventral ones, in the abdominal position, carry at least the two external rays subject to modifications.
It is also recognized for its bluish slate gray color but after death it assumes a black tint. Pectoral and ventral blackish with longer whitish or yellowish rays.

Biology –
The Bathypterois dubius, like other species of its family, is hermaphrodite. It is, moreover, a fish, of a solitary nature.
The habits and way of life of this species are almost completely unknown.

Ecological Role –
The Mediterranean spiderfish is a fish that probably rests on the muddy bottom without sinking into it using the elongated rays of the ventral and pectoral fins as a tripod. This behavior is known with certainty for the species Bathypterois grallator, occasional in the Mediterranean.
It is a carnivorous fish that feeds on benthic invertebrates.