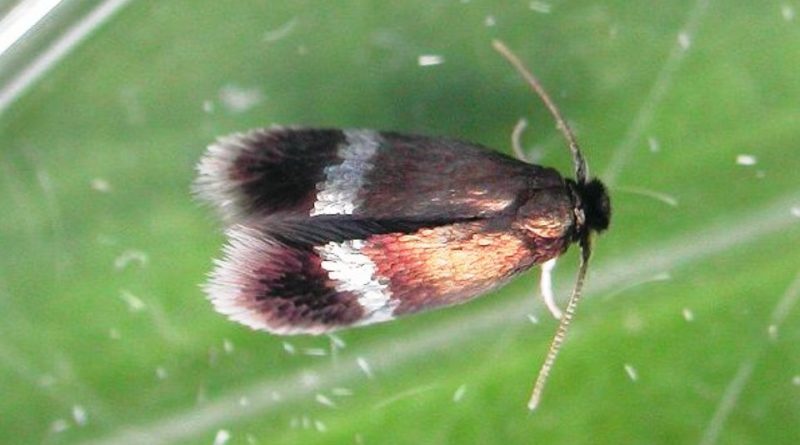 The banded apple pigmy (Stigmella malella Stainton, 1854) is a moth belonging to the Nepticulidae family.

Geographic Distribution and Habitat –
The banded apple pigmy is a small moth found in almost all of Europe, with the exception of Iceland and Norway.
The larvae of this insect live on various species of the genus Malus and sometimes Prunus.

Morphology –
The Stigmella malella is a small moth whose adults have a wingspan of about 5-6 mm.
The front wings are brownish-gray with a whitish-silvery transverse band and finely frayed edges.
The larva is yellow, brown-headed, and chewing mouthparts with opposite mandibles, six thoracic legs, and abdominal legs.
The pupa has visible head appendages, wings and legs that lie in sheaths.
The eggs are laid on the lower layer of the leaf.

Attitude and Life Cycle –
The banded apple pigmy overwinters, in the ground, at the pupal stage.
The adults appear in the spring period, between the end of March and the beginning of April, giving rise to about 4 generations whose flights take place in the respective summer months; and precisely:
– 1st flight: adults in the months of March-April, from wintering pupae;
– 2nd flight: adults in the months of May-June;
– 3rd flight: adults in July;
– 4th flight: adults in the months of August-September; this generation produces the wintering pupae.
At the end of its growth, the larva leaves the leaf and passes to the stage of niposis in the soil where it overwinters.
The damage of this moth is determined by the larval stage; the larvae, with their trophic activity, feed on the mesophyll but respect the epidermis, generating elongated leaf mines with a sinuous and serpentine pattern, called “ophionomes”.
The mines are transparent and evident as whitish-ocher areas on the green leaf page. Closer observation of the mines reveals a darker midline that runs through the mine and which is due to the larva’s droppings.
Usually the mines are not so numerous as to cause the fall of the leaves.

Ecological Role –
The fight against Stigmella malella is almost never necessary both for its low harmfulness and because any treatments made for the Cemiostoma (Leucoptera malifoliella O. Costa, 1836) have a control action also on this moth.
Furthermore, it should be borne in mind that any chemical interventions degrade the biocenosis of the useful entomofauna, including the Hymenoptera Eulofidae, parasitoids of the larvae that are attacked inside the mines.
For this reason, an environmental monitoring must be carried out by sampling or with sexual traps that verify the moment of flickering.
In the case of sampling, a certain number of leaves are chosen, taken from the orchard at medium height, and the eggs, larvae and mines present are counted on them; the intervention thresholds are:
– 1st generation: 20-30% of leaves with eggs, or 20 mines out of 100 leaves with live larvae;
– 2nd generation: 15-20% of leaves with eggs, or 20 mines with live larvae on 100 leaves;
– 3rd generation: 10 mines with live larvae on 100 leaves. We intervene with growth or development regulators chitin inhibitors applicable even at the beginning of flights.
In the case of monitoring with sexual traps, the intervention methodology is as follows:
– the traps must be installed in the orchard at the end of March in a number of 1-2 per hectare or per plot, depending on the type of farm.
The evaluation of the intervention thresholds is complex and is linked to various factors such as planting density of crops, specializations, etc; in some cases, thresholds of 400 first generation adults trapped per week justify the intervention against the second generation.