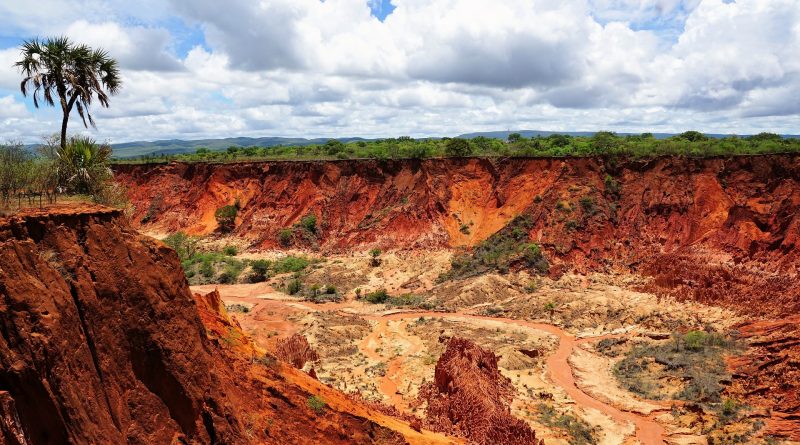 Madagascar is an island state located in the Indian Ocean, off the east coast of Africa opposite Mozambique.
This country has 26,097,000 inhabitants (2019) and its capital is Antananarivo 1,050,000 inhabitants.
The main island, also called Madagascar, is the fourth largest island in the world. It is home to 5% of the world’s plant and animal species, 80% of which are endemic to Madagascar. Among the best known examples of this exceptional biodiversity are the order of lemurs, over 250 species of frogs, numerous species of chameleons and the typical baobabs.
The Malagasy language is the first language of Madagascar, but the population is also fluent in French (following the colonial past of the island).

Geography –
The island of Madagascar, over 1 500 km long, is the fourth largest island in the world. It is located off the east coast of Africa, in the Indian Ocean, 400 km from the coast of Mozambique (from which the Mozambique Channel separates it). It is a tropical island (crossed by the Tropic of Capricorn) but, given its considerable size, landscape and climate vary a lot.
Among the most salient characteristics of Madagascar we remember the intense red color of the soil, due to its rich iron content. Due to the clear prevalence of ferrous soils, Madagascar is also called the Red Island (or the Red Continent).
The heart of the country is constituted by the central plateau, the hautes terres, which includes the regions of Fianarantsoa and Antananarivo and has hills and mountains that protect fertile and fundamental valleys for agriculture; here there are numerous rice crops.
Going north we find the regions of Antsiranana, Sava, Mahajanga) where forest-covered hills predominate, and the earth is always humid. The east coast (from the north: Fenoarivo Est, Toamasina, Mananjary, Farafangana) is rich in vegetation and natural resources; fishing, hunting and agriculture are practiced there, and much of the territory is covered by forest as in the north.
Going south, the predominant landscape returns to being the forest, which represents the main source of livelihood for the local populations. In the south-eastern regions (Vangaindrano and Taolagnaro) the land is also fertile but water is not always sufficient. In the south (Ambovombe, Androy, Ampanihy) the plain is fertile but dry, and there are areas covered by savannah and steppe rich in prickly pears of Mahajanga, a vast plain suitable for cultivation. Between the center and the west coast (Tsiroanomandidy, Manja, Ankazoabo, Sakaraha, Horombe) mountainous reliefs and fertile plains alternate, at least in the north; as we proceed towards the south (Isalo, Ilakaka, Benenitra, Belamoty, Bezaha) we meet again savannah and less cultivated areas, albeit with exceptions (for example, the Onilahy valley is the heart of rice production in the south of Madagascar, with 2 or 3 harvests per year). The whole western part of the island, from Mahajanga to Ambovombe, has a climate suitable for the breeding of cattle and sheep; very numerous are above all the zebus.
As far as hydrography is concerned, the mountains that run along the central part of the island, on the north-south axis, divide the river system of Madagascar into two sides: the western side, represented by navigable rivers that slowly descend towards the west. to the Mozambique Channel, among which there are the major rivers of the island: the Betsiboka, the Tsiribihina, the Mangoky and the Onilahy, and the eastern side, whose streams, shorter and more impetuous, flow to the east in the Indian Ocean.
The largest lake is the Alaotra, located about 7 km from Ambatondrazaka (Province of Toamasina). 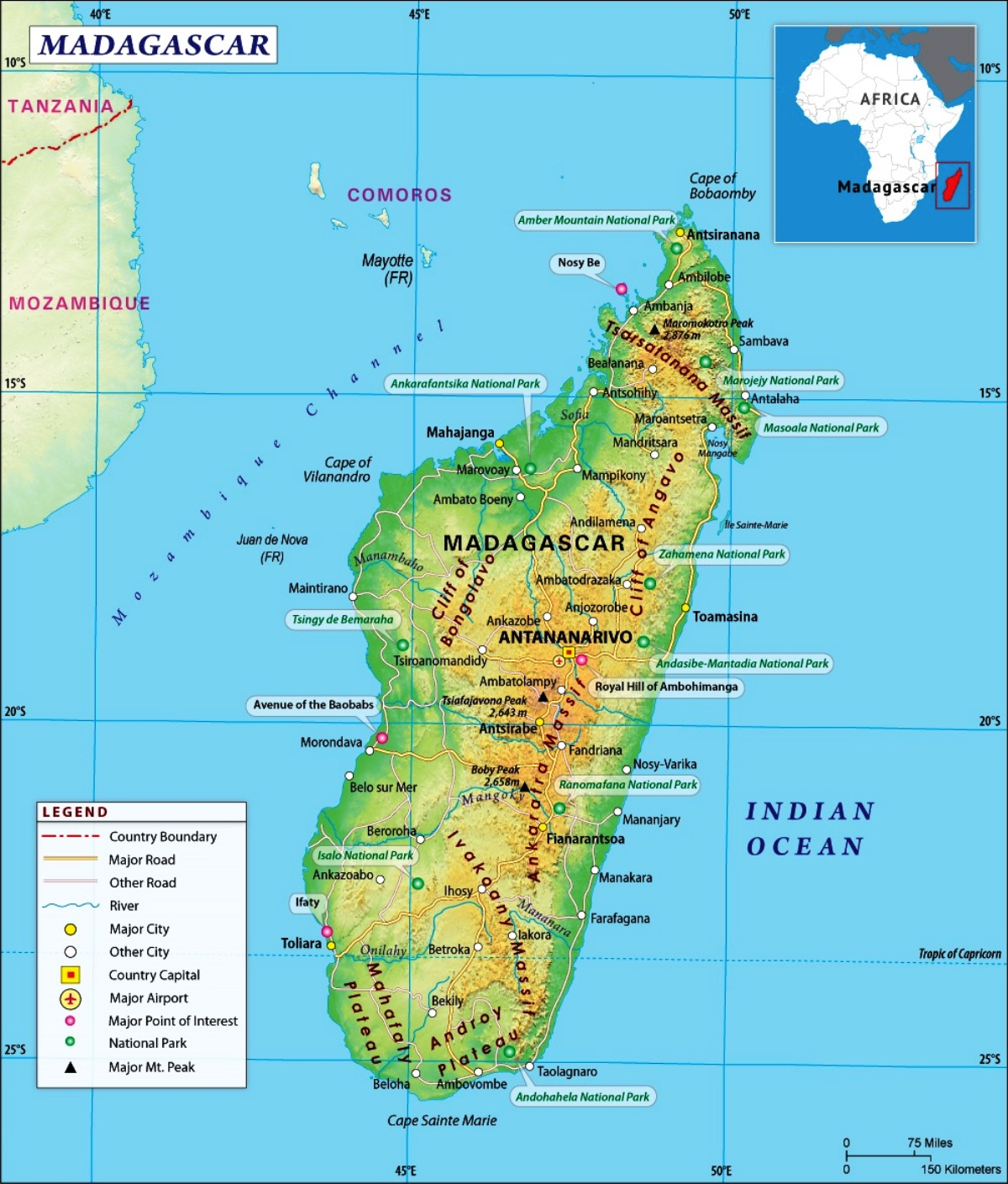 Climate –
The climate of Madagascar is definitely tropical, although due to the longitude of this country and the presence of different slopes it varies from place to place. The eastern side, due to exposure to monsoon flows, is very rainy and is also often hit by cyclones. The climate is sub-desert in the western and southern parts. Temperatures are high all year round, only decreasing by climbing the plateaus and mountain ranges. On the central plateau the climate is hot in summer and cold in winter, even in the coldest months snowfalls above 2000 m are frequent. The rains are concentrated during the austral summer which lasts from November to March. In the south of the country, rains are rare.

Flora-
The flora of Madagascar, in addition to its richness, is determined by the isolation of this country which, being a continent island, has allowed the evolution of many indigenous peoples.
Among the plant species, eight families of angiosperms are endemic to Madagascar: Asteropeiaceae, Didymelaceae, Didiereaceae, Kaliphoraceae, Melanophyllaceae, Physenaceae, Sarcolaenaceae and Sphaerosepalaceae. About 170 species of palm trees are found on the island, including the raffia palm (Raphia farinifera); one of the most typical species of the island, the so-called traveler’s palm (Ravenala madagascariensis) actually belongs to the Strelitziaceae family. There are also numerous species of ferns and bamboo; a thousand species of orchid (including the one from which vanilla is obtained), many carnivorous plants, including Nepenthes madagascariensis (once widespread throughout the island, now limited to the Tolagnaro area) and the agaves from which obtains a fiber known as sisal, used for making biodegradable packaging. Of the eight known baobab species, six are endemic to Madagascar. Finally, the curious Pachypodiums are sometimes called “baobab bonsai” (although they have no relationship with the baobabs), a few tens of centimeters in height and stubby trunk and branches with a relatively large diameter.

Fauna –
As mentioned before, among the best known examples of this exceptional biodiversity are the order of lemurs. All extant lemur species live in Madagascar or neighboring islands, as do two-thirds of the known species of chameleons and numerous species of turtles and geckos. Typical mammals on the island also include a giant rodent, votsotsa (Hypogeomys antimena), a family of insectivores, tenrecs, five species of mongoose, including the famous ring-tailed mongoose (Galidia elegans), and other carnivorous species. such as the fossa (Cryptoprocta ferox) and the fanaloka (Fossa fossana).
Numerous endemic species have become extinct relatively recently; many of them disappeared in a period corresponding to the first colonization by man, around 2000 years ago. On the island there were, among other things, a pygmy hippopotamus, a giant lemur, or “Megaladapis”, (the size of a gorilla), a pit the size of a leopard, a similar “elephant bird” (Aepyornis maximus). to the ostrich and a giant tortoise.
Among the other animal species present on the island we can mention crocodiles and sixty species of snakes (none of which are dangerous for humans), including three different species of boas. The seabed is also rich in fish, corals and marine plants, both in the south (especially in the southwestern coral reef, between Anakao and Morombe) and in the north (in the Nosy Be area). Whales pass seasonally off the island of Sainte-Marie.