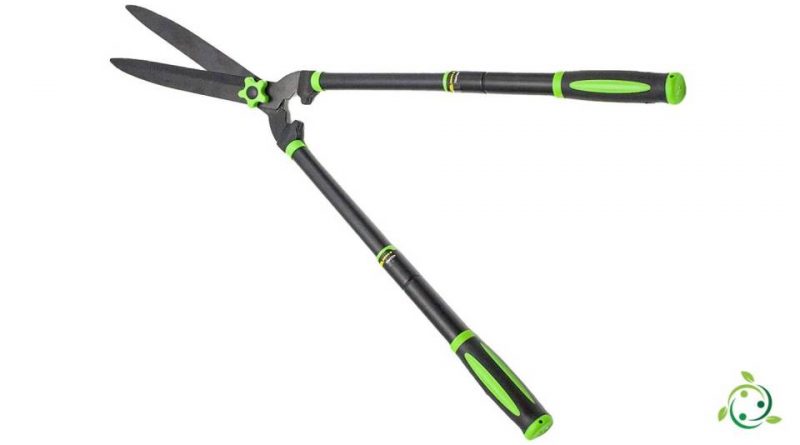 The hedge shears can be both manual and electric.
These scissors are used for particular pruning operations (such as cutting hedges) and for this reason they are particularly long, from 50 to 60 cm, length equally distributed between blades and handle.
These scissors, unlike the common pruning shears, are held with two hands.
The handles are very long just to make the most of the lever principle, developing great power with minimal effort. Thanks to the little resistance that the hedge opposes to the cut, even the blades are quite long (from 20 to 30 cm), which increases efficiency without compromising comfortable use.
On the market there are manual hedge trimmers with telescopic aluminum extendable handles, equipped with locking lever at various heights, for the care of the upper part of the hedges, not otherwise reachable from the ground.
The characteristic of the telescopic handle is that it is extendable by about 50% compared to the fixed handles, reaching 75 – 85 cm, so that overall the scissors can exceed one meter in length.
A more advanced and professional version of these tools is that of the motorized hedge shears, which can be battery, electric, petrol.
In this case, the blades of these tools are approximately twice as long as those of manual scissors and can be single or double toothed.
Obviously, the electric hedge shears are much lighter than the model with the internal combustion engine, but it needs to be connected to the electrical system by means of extensions, so it is suitable for the maintenance of hedges close to homes. Normally an electric hedge trimmer has a weight of about 3 kg, which for the model with internal combustion engine doubles if the weight of the mixture is also considered.

Using the hedge shears –
These tools can be used not only for the maintenance and care of the hedges but also to free the garden from spontaneous vegetation characterized by herbaceous plants that have a woody consistency compatible with the type of scissors.

Maintenance –
The hedge shears, like all cutting tools, must be sharpened periodically and when they do not ensure a clean cut and begin to jam, holding the bushes between the blades without cutting them completely.
Furthermore, since the cutting efficiency, as well as the blades depends on the precision with which they are placed side by side, it is necessary to adjust them by acting on the pin, tightening or loosening it just enough to ensure the blades have the right alignment. In this regard, remember that a dull tool is more dangerous than a particularly sharp tool.
Furthermore, between maintenance operations, remember to clean the blades with a rag after each use, before placing them in a dry place, to prevent them from being attacked by rust.