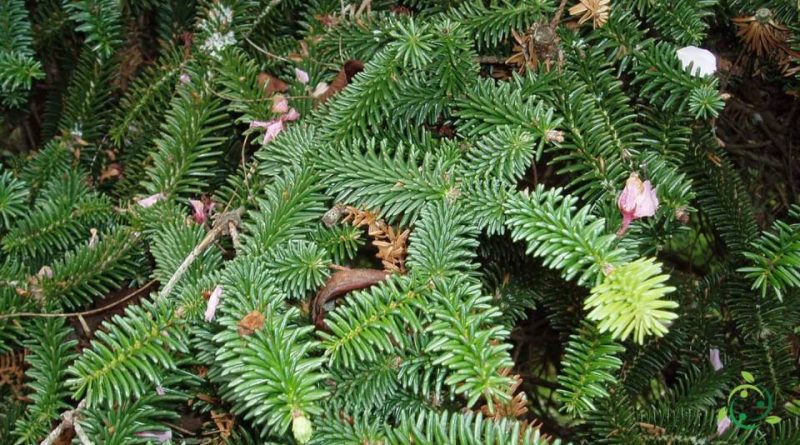 The Greek fir or Kefalonia fir (Abies cephalonica Loudon, 1838) is a tree of the Pinaceae family that grows in the southern regions of the Balkan Peninsula and originates in southern Greece and its islands, where it is present in spontaneous formations between 700 and 1600 m asl.
This plant is also widespread in many European regions, including Italy, where it has been used in reforestation and for ornamental purposes.
The reproductive structures of this plant are:
– small male cones, typically red when not yet ripe, tending to yellow because covered by pollen when ripe;
– cylindrical female cones, carried erect, of about 10-15 cm in length; they have pointed triangular bracts.
Reproduction occurs by seed and requires an average of 6 to 8 weeks with the planting taking place in spring or early summer. Recall that it is a species that does not particularly tolerate transplantation and in any case, complete rooting is slow.

Cultivation –
Abies cephalonica is a plant that grows well in the mountains between 800 meters and 1,400 meters above sea level. and on soils ranging from acidic or neutral to alkaline pH. It prefers a humid soil without excess, often on the northern slopes, and is completely rustic even if it is very damaged by late frosts and therefore requires a careful choice of the planting area.
Among other aspects, it is reported that this plant does not tolerate atmospheric pollution. As far as exposure is concerned, it adapts to both the sun and dense shade, although in the latter case it will grow more slowly.
From sowing, to be carried out in the greenhouse in February or outdoors in March, germination takes place in 6-8 weeks. It can also be sown immediately after harvesting in autumn, outdoors, to subject the seed to a natural stratification that increases the usually low percentage of germination.
Subsequently, the seedlings must be repotted and, until their first winter, they must be kept sheltered in a cold greenhouse.
The optimal time for planting is the one that goes from spring to early summer, remembering that the plant does not tolerate transplanting well and in any case complete rooting is slow.
This plant, as well as a specimen for gardens and parks, for ornamental use, is used in reforestation on calcareous soils and in more drought areas than the Abies alba area; a plant that tends to be heliophilic, but which, in its juvenile stage, tolerates short periods in shady areas well.
In the north of Greece, specimens hybridized with Abies alba are often found.