The long-eared owl (Asio otus (Linnaeus, 1758)) is a bird of prey belonging to the Strigidae family.

Geographic Distribution and Habitat –
The Long-eared Owl is a bird of prey widespread in Eurasia, North Africa and North America.
In Italy there is the subspecies Asio otus otus sedentary and nesting in the wooded, flat and mountainous areas (up to 1800-1900 meters of altitude) in the north, in the center and more rarely in the center-south (especially along the Alps and the Apennines).
Some northern populations migrate southward during the winter (Mexico, Egypt, India), returning to their usual distribution zone the following spring.
Its habitat is mainly in the woods and coniferous forests. 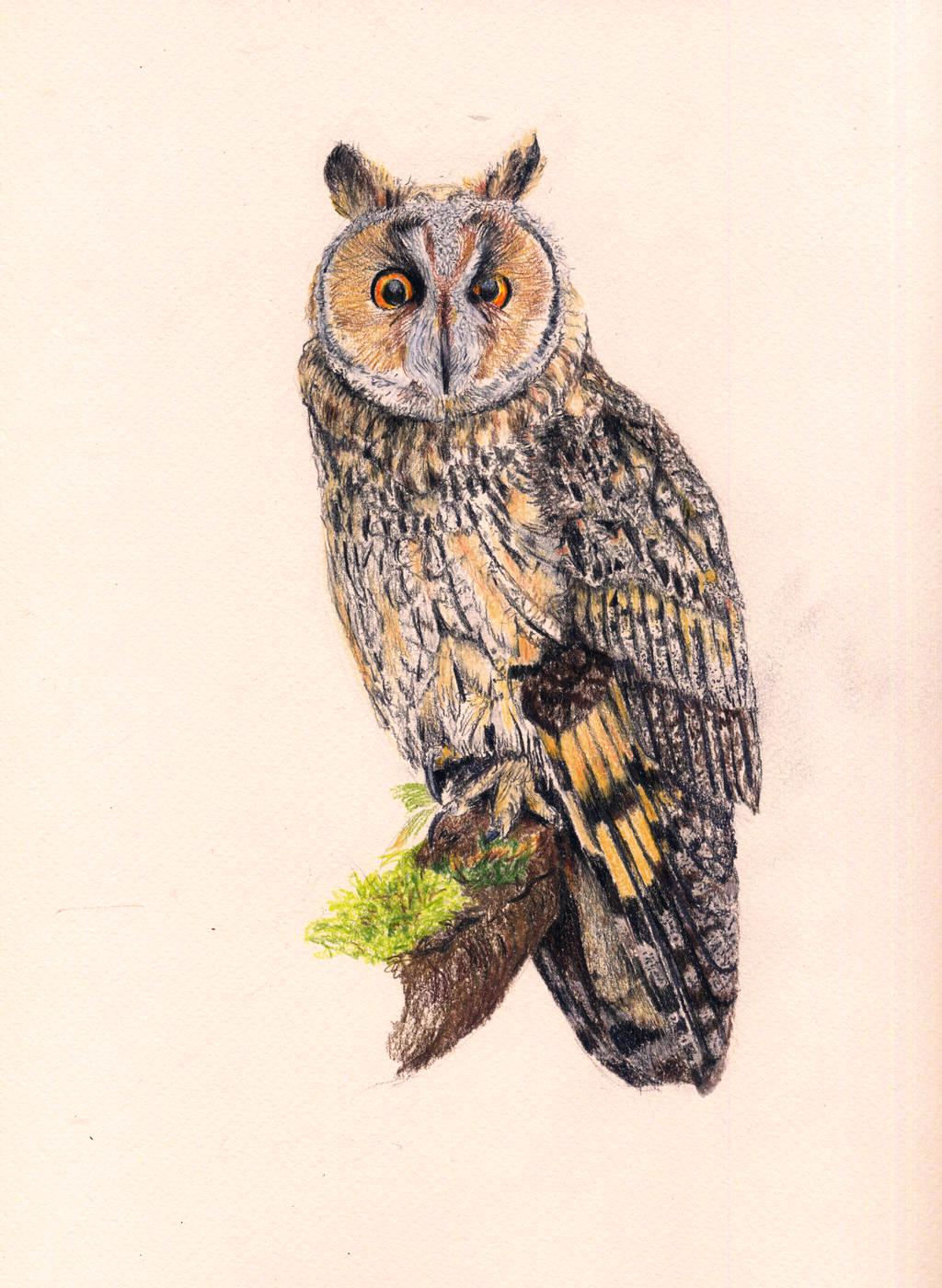 Description –
The long-eared owl is a bird of prey with a total length of 34-37 cm, a wingspan of 88-100 cm and with a weight of 220-280 grams for males and 250-370 grams for females; with little evident sexual dimorphism and the female normally larger than the male.
This animal has a slender body, of medium length, with fawn, brown and greyish plumage on the upper side, streaked with dark, brown-yellowish below with brown streaks; gray in young specimens.
It has characteristic tufts on its ears, simple feathers that do not affect the functioning of the auditory system, which is also very fine.
The beak is short, hooked, gray or blackish with pinkish wax.
The head is relatively large, with two tufts of erectable feathers and facial discs (dark in juveniles).
The eyes are large, placed anteriorly, with a yellow-orange iris.
The wings are long, wide and rounded.
The tail is relatively short, rounded, tawny-brown with dark transverse streaks.
The legs are of medium length, totally feathered, fulvic, with grayish-black claws.
The flight is beaten, interspersed with glides and silent.

Biology –
In Asio otus the breeding period runs from March to July. This bird normally nests in other birds’ nests or in a squirrel’s nest. If it does not find nests of this kind, it lays its eggs on the ground, under a tree or shrub.
The female lays 3-10 (4-5) white eggs.
The incubation period lasts about 27-28 days, with only one brood per year and more rarely two. During this period and until after hatching, the female is fed by the male.
Its offspring are nesting and the young leave the nest after 3-4 weeks.
In this species the maximum age recorded in the wild is 28 years.

Ecological Role –
The long-eared owl is the only nocturnal bird of prey that aggregates in dormitories in winter, selecting perches on trees, often also in urban areas.
In the period from December to February, he spends his days on the same tree from which he then flies in the evening, to go hunting.
The individuals present in a dormitory are originally from the surrounding area but a part of these also comes from wintering subjects who also come from other countries. In early spring they disperse, abandoning the dormitory to mate and nest.
For this reason, the best way to count wintering long-eared owls is to find a dormitory and count the animals present.
The Asio otus hunts a large variety of small animals, such as mice, shrews (Sorex araneus), moles (Talpa europaea), squirrels, bats, rats, birds and insects. During the day it sleeps in the hollows of trees or in old ruins, perfectly camouflaged by the plumage.