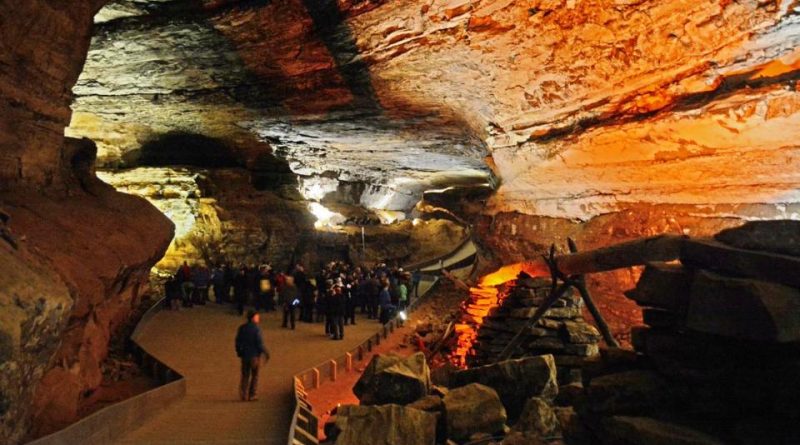 Mammoth Cave National Park, whose WDPA Code is: 371415 is a protected natural area in Kentucky that includes Mammoth Cave, the longest cave system in the world. The system is sometimes referred to as the Flint-Mammoth-Toohey-Eudora-Joppa-Jim Lee Ridge Cave System, named after the hills under which it is located.
This area was declared a national park on July 1, 1941. It became a World Heritage Site on October 27, 1981, and a biosphere reserve on September 26, 1990. The 214 km² of the park is located in Edmonson County, Kentucky, with small areas extending east into Hart County and Barren County. It is centered around the Green River and its tributary Nolin River, which joins the Green River within the park. The Green River has a dam on the western edge of the park, and the river flows free only in a small part of the eastern half of the park.

History –
Before Mammoth Cave was a popular travel destination, or even a national park, the cave owners ran a profitable mining business inside the underground passages. However, they were not precious metals or gems that were mined from Mammoth Cave, but rather a mineral needed by the United States during the war of 1812.
It was Dr. John Croghan of Louisville, Kentucky who recognized certain qualities of the air at Mammoth Cave. He believed that uniform temperature and humidity would be therapeutic for tuberculosis patients and in 1842 he invited 16 patients to settle in the cave. So he developed an experimental hospital treatment facility inside the cave, around the same time that tourism was expanding.

Geology –
While geology often shows us wonders on the earth’s surface, this would be incomplete without thinking of the world below us, where rock beds have formed over hundreds of millions of years. Caves such as Mammoth Cave allow us to explore this ancient world by allowing us to walk through the rock layers and see the formation of the earth up close.
Researchers have dated Mammoth Cave’s rock beds to the Mississippian period.
The rock beds formed about 320-360 million years ago. However, the Mammoth Cave passages did not begin to form until about 10-15 million years ago, when streams and rivers flowing on the surface allowed the water to sink and enter the rock beds through small crevices.
The highest passages formed up until about 2 million years ago, when research speculates that ice age activity altered the amount of water that flowed into the cave and that the remaining streams of the cave descended to the lower levels of the cave. itself.
There are currently five distinct “levels” of passageways within Mammoth Cave. These consist of four fossil levels and the modern river level, which is the lowest level located more than 90 meters below the surface.
The cave is still forming today as the water moves down through these large and small passages to reach the water table, and underground rivers continue to flow out of the cave and into the Green River. 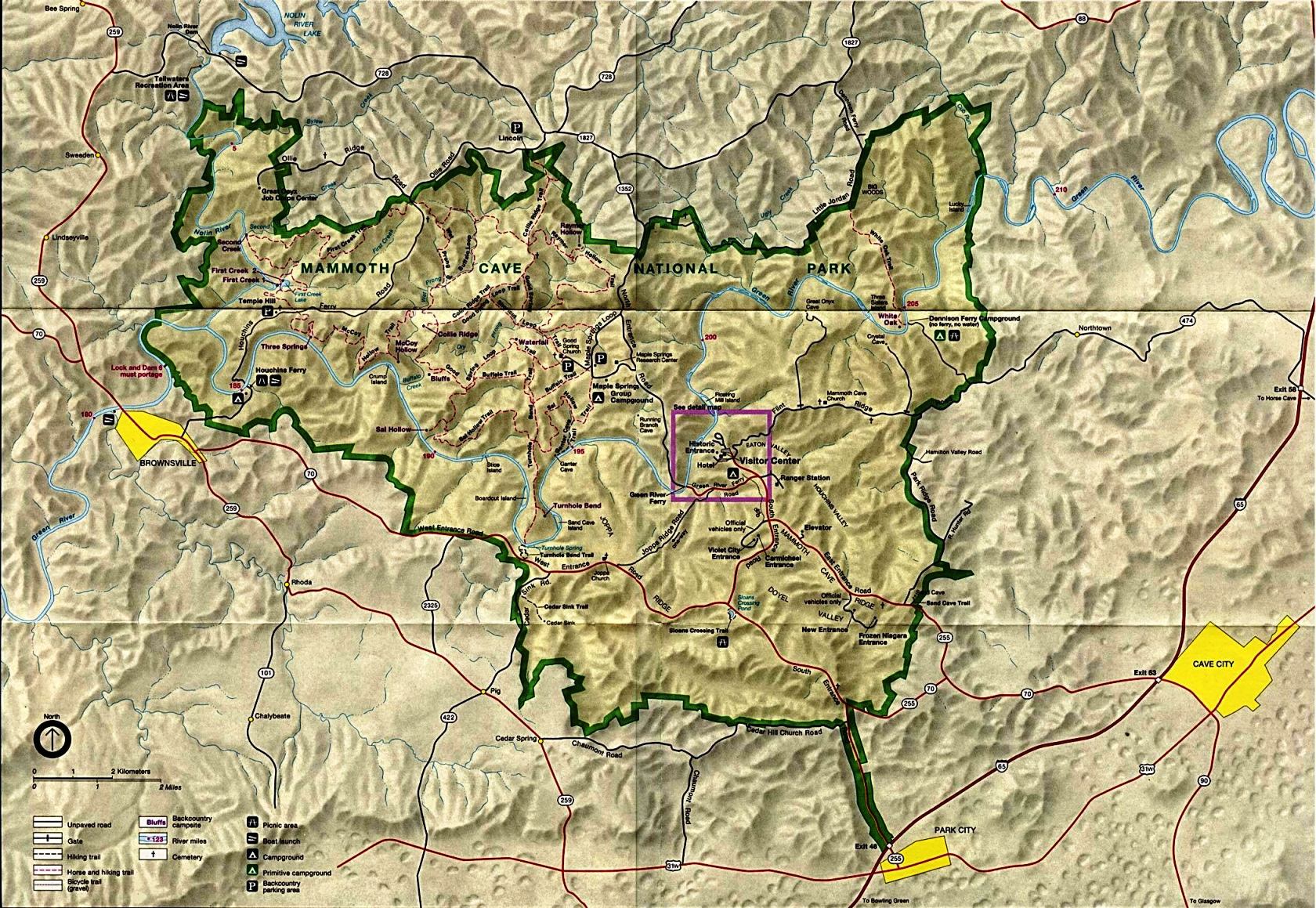 Flora –
Mammoth Cave National Park is home to a wide variety of plants and animals ranging from rare exotic cave species to the more common woodland creatures found in eastern deciduous forest environments. Scientists have discovered more than 130 species in the cave itself, as well as nearly 1,000 species of surface flowering plants, hundreds of animal species, more than 80 types of fish and over 50 types of freshwater mussels. Mammoth Cave is home to over 70 endangered, threatened or state-listed species.
The vegetation of Mammoth Cave National Park is mainly characterized by second-growth forests of various vintages and small areas of old growth. About 45% of the park’s land was used for agricultural purposes before the park was established. These areas are largely dominated by eastern red cedar and Virginia pine, mixed with deciduous trees along the outer edges. The most mature mountainous sites are generally hickory oak forests, and in the humid hollows dominates the beech, maple and poplar forest.
Along the Green and Nolin Rivers are sycamore, silver poplar, river maple and elderberry. Special communities of limited distribution include mountainous swamps with oaks, rubber trees, and red maple; deep sandstone cavities with hemlock and umbrella magnolia; dry limestone cedar oak glades; at the edge of the cliff we find the Virginia pine on sandstone lands.
Kentucky once had a large area of ​​savannah grassland known as “Barrens”. This was, in part, a man-made ecosystem maintained through intentional fire by American Indians prior to European contact in an attempt to attract deer and buffalo. Although largely eliminated from the region due to agricultural practice and fire suppression, small remnants of native grasses still exist and consist of varieties of Indian Grass, Big Bluestem, Little Bluestem, and others genetically distinct from their cousins.

Fauna –
On the surface of Mammoth Cave National Park we find animals typical of an eastern hardwood forest. Larger mammals include the white-tailed deer, fox, raccoon, possum, marmot, beaver, rabbit, and squirrel. Smaller mammals, such as bats, mice and squirrels, also abound. Many reptiles and amphibians also find protection in the park. Copperheads and rattlesnakes are also common. Birds such as mourning doves, whippoorwills, owls, hawks, woodpeckers, and warblers fly through the forests of Mammoth Cave. Wild turkeys, reintroduced in 1983, are now regularly seen by visitors.
The Green River, which winds its way through the park, supports an unusual diversity of fish and three species of cave fish. The river supports a wide variety of shellfish, such as freshwater mussels, which survive in sand and gravel. Over 50 species of mussels, including seven on the endangered species list, live in the park. Aquatic animals in the river play an important role in providing nourishment to other animals: in the cave, in the river and on land.
Inside the caves we find more than 130 species. These are divided almost equally between three classes of obligate cave dwellers (troglobes), optional species that can complete their life cycle in or out of caves (troglophiles) and those that use caves as a refuge (troglossenes). Due to the region’s unique history, huge variety of abiotic conditions, and the presence of key trogloxene species, Kentucky’s south-central karst is home to cave species and biotic cave communities that are some of the most diverse in the world.
Although Mammoth Cave National Park is not currently used by large numbers of bats, 12 species, including two endangered, live in the caves. By consuming huge numbers of insects, bats function as a “natural insecticide”, controlling crop pests and insects that can spread disease. The little brown bats, one of the most common species in Mammoth Cave, can eat around 600 mosquitoes in an hour. Additionally, many cultivated plants we eat, including avocados, dates, peaches, bananas, and cashews, depend on bats for pollination.
However, when you visit Mammoth Cave National Park you are much more likely to see crickets than bats. Crickets, actually a kind of grasshopper, are also troglossenes. They spend much of their life in the cave but depend on nocturnal forays to the surface to gather food. Since Mammoth Cave has a declining bat population, crickets are extremely important for providing energy, in the form of droppings, eggs, and carcasses, to other animals in the cave.
Troglobes, the group of cave animals most adapted to cave life, cannot survive outside caves. Many, including eyeless fish and shrimp, demonstrate creative adaptations to their environment. With no need for camouflage or sun protection, many of these animals have lost their pigmentation and are white. Some have no eyes. Most have developed other highly sensitive sensory organs to detect predators and prey. Because food in caves is scarce, full-time cave dwellers tend to be smaller, with a lower metabolism, and a longer lifespan than their surface counterparts.