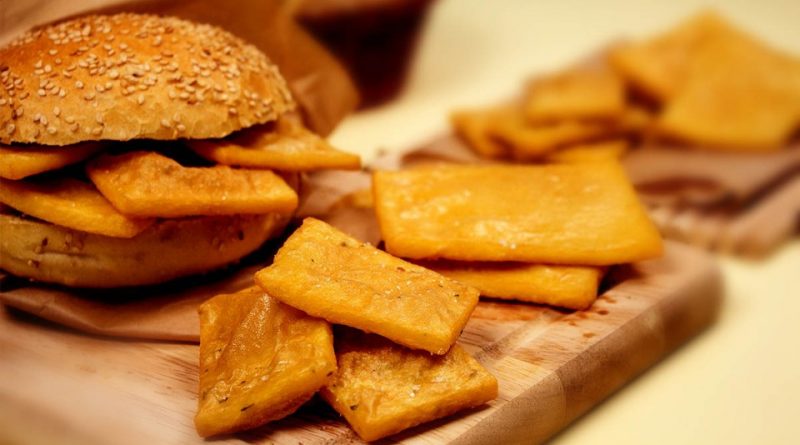 Panella is a pancake made from chickpea flour and recognized within the Traditional Italian Agri-food Products (PAT) in the gastronomy products sector.

Origins and History –
Already in the imperial Roman era, chickpeas were widely used in cooking, especially in the form of ‘polenta’, that is, chickpea flour mixed with water and cooked; as it was consumed by the Greeks, throughout the area of ​​the so-called “Fertile Crescent” and especially in the Indian subcontinent.
According to some, the true origins of the panelle date back to the Arabs, rulers of Sicily, between the ninth and eleventh centuries who wanted to experiment with recipes with ground chickpea to obtain a flour. Initially they used the flour produced, mixing it with water and cooked in this way on the fire, which gave life to a raw dough with a decidedly unpleasant taste. The first panella comes from the frying in oil of a thin sheet of this pasta.
It is possible, however, that the first panelle were cooked on the stone in vertical ovens, those used to bake flat bread. Perhaps in the late medieval period panelle began to be fried, probably during the French dominion of the Angevin dynasty of Sicily, since they were particularly fond of it (see the anecdotes relating to the events of the Sicilian Vespers).
Panelle represent one of the most famous street foods in Palermo, even if in recent times they have spread to other cities such as Agrigento, and are the fried variant of chickpea farinata.
This sort of small flatbreads testify to the history of the Mediterranean peoples. Already the Arabs, rulers of Sicily at the turn of the ninth and eleventh centuries, with chickpea flour mixed with water obtained a sort of dough which, cooked in a pan to obtain a thick and creamy mixture, was crushed and fried in small pieces.
The Sicilian saying “pari ‘na paniella” (you look like a panella) refers to objects that have had the bad luck of being crushed under excessive weight.
Panelle are the typical snack of Palermo accompanied by bread and often by cazzilli (potato croquettes).
Panelle can be found everywhere, in fixed or mobile frying shops, on busy streets, in popular districts or in the historic center.
In the past, however, the Panellaro came with a cart on which there was a wooden hut closed on three sides; inside there were: a lava stone stove on which a large saucepan was used for frying, a large shelf showing the already fried panelle contained in aluminum plates, a container for salt and placed in a corner the “mafalde” (or muffoletta, however white bread) and, hanging from a hook, some paper rectangles as napkins.
There is a rumor that until a few years ago, to ascertain the temperature of the oil, the panellaro adopted the system of “spitting” into the liquid to verify the ideal frying temperature.

Geographic area –
This specialty, now a typical Sicilian street-food, once could only be tasted in Palermo and its surroundings, in one of the many bars, fryers or street vendors in the area.
Nowadays, some fry shops that prepare panelle are present in other provinces, such as in Agrigento, Trapani and other Sicilian cities.

Description –
The panelle are “cutlets”, usually rectangular or round, a few mm thick which are fried in abundant olive oil until they take on a more or less dark golden color.

Production Method –
As mentioned, the panelle are prepared with chickpea flour, water and parsley.
The procedure involves dissolving the chickpea flour in salted water and stirring with a ladle over medium heat until it becomes a creamy paste.
Parsley is added to this paste. The dough is then rolled out on a surface, cut and then fried.
The panelle thus obtained can be fried immediately or, more normally, stored for a certain time in the refrigerator before being prepared for immediate consumption.
Among the variations to this traditional recipe we remember that of the sweet panelle which are usually prepared on December 13, for the feast of Saint Lucia. Sugar, butter or lard is added to the chickpea flour; they are often served filled with custard.

Gastronomic use –
In the most authentic tradition the panelle are served above all in the middle of the mafalde; these are loaves of bread weighing about 200 grams with the crust covered with sesame seeds (in Palermo called “cimino, gigiolena or gioggiulena”).
These are often eaten together with “crocchè” (from the French “croquette”, potato croquettes) and which in the Palermo dialect are called “cazzilli” in reference to the phallic form, or with other specialties fried in batter, and seasoned with salt as desired. , pepper and lemon.
Panelle represent the characteristic snack of Palermo and have spread in recent years also in other provinces of Sicily.
Especially in Palermo you can buy them in many places in the city, in particular in the “friggitorie”, including street vendors, present in the streets of the Sicilian capital.