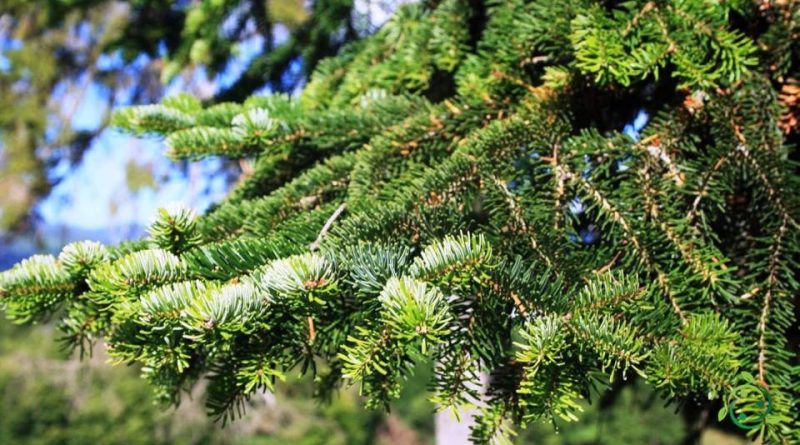 The Caucasian fir (Abies nordmanniana (Steven) Spach, 1841) is an evergreen conifer very similar to the silver fir, which it replaces in the regions around the Black Sea.
It is a tree native to the Caucasus and Asia Minor, where it forms extensive forests. The first scientific description of this conifer (also called Crimean Fir) dates back to 1838 by the Finnish botanist Alexander von Nordmann.
This plant is grown in other parts of southern Europe, often to be used as a “Christmas tree”.
In the areas of origin it is used as a wood essence. In Europe, the Caucasian Fir is used in parks and gardens and for the production of Christmas trees. Several varieties are selected for ornamental purposes.
The Nordmannian Abies is a monoecious species; the male cones are initially reddish in the shape of a raspberry; the female ones are isolated, cylindro-conical, purplish brown, resinous and with large squat scales, and are present on the higher stages; the pine cones are erect, about 15 cm long and are provided with hooked scales.

Cultivation –
The Nordmannian Abies can be grown in a large area provided that some basic precautions are respected; the cultivation area ranges from temperate to cold ones.
These plants prefer locations where they can enjoy at least a few hours of direct sunlight. These are very rustic plants that can be grown in the garden throughout the year.
If the cultivation is done in mountain or alpine areas it is good to allocate this plant to brighter areas exposed to direct sunlight.
The Nordmannian Abies can withstand even intense frosts without problems; however, during particularly harsh winters, it is advisable to cover the aerial part with non-woven fabric. It usually bears minimum temperatures down to – 30 ° C.
The plant also prefers very clayey soils but not on condition that they are not calcareous and chalky.
The plant can be purchased as a seed or seedling in specialized nurseries.
Before planting and towards the end of each winter, it is recommended to bury organic fertilizer or slow release granular fertilizer at the base of the plant; we can intervene again at the end of the summer.

Soil moisture –
The Nordmannian Abies is a tree that, especially in the early years, needs a particularly moist soil.
The advice is to water regularly, especially during the hottest months of the year, avoiding leaving the soil dry for very long periods of time.
In autumn and winter we can avoid watering, or intervene only during the hottest days.
Especially if the plant is grown in warmer and drier areas, the use of irrigation and maintenance of soil moisture becomes important.
Normally it is necessary to intervene, especially in the south, with very regular and abundant water supplies; from March to October we provide a good amount of water every week, but always remember to let the soil dry well between one watering and the next. During the cold months or in particularly rainy periods we can avoid watering.

Phytosanitary treatments –
Nordmannian Abies is a fairly resistant plant, especially if you avoid using mineral nitrogen fertilizers (especially nitric) and are grown on suitable soils. Generally, action is taken only in the case of parasites present on the plant; in case of onset of fungal diseases, an intervention can be carried out, to be carried out in spring, using Bordeaux mixture, before the buds are excessively swollen.