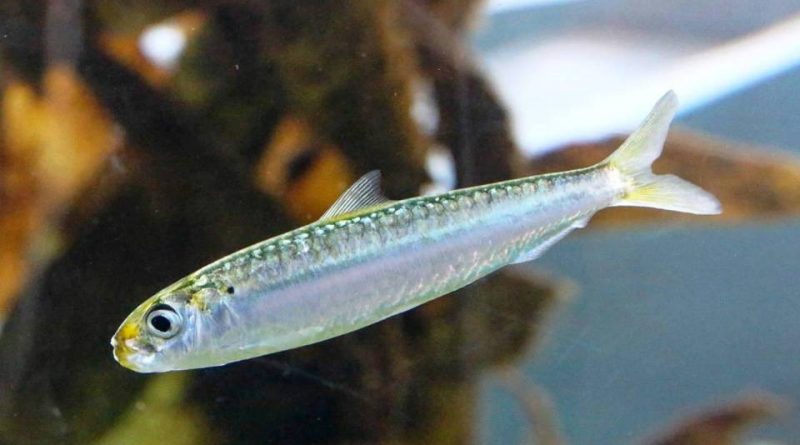 The Round sardinella (Sardinella aurita Valenciennes, 1847) is a sea fish belonging to the Clupeidae family.

Geographic Distribution and Habitat –
The Round sardinella is a fish that lives in the Mediterranean Sea, in the southern part of the Black Sea and in the eastern Atlantic Ocean between Portugal and South Africa. It also frequents the American side of the Atlantic, between Cape Cod and Argentina, including the entire Caribbean Sea and the Antilles.
It is a thermophilic fish, common in the southern Mediterranean and, until a few years ago, rare in the Ligurian and Adriatic seas. Today it is also common in the northernmost basins, undoubtedly following the southernization of the Mediterranean.
It is a pelagic species, rare under the coast and common offshore that can be found both on the surface and hundreds of meters deep.

Description –
The Sardinella aurita is a fish that closely resembles the common sardine.
The body is fusiform, elongated, compressed in the ventral part, covered with caducous cycloid scales; on the lateral line, which is barely visible, they are 43-51. It has a serrated ventral hull formed by scales transformed into sharp and pointed and superimposed shields, which leave the sharp and sharp rear end protruding. The head is longer than the maximum height of the body. The eye is large and covered with a fairly developed fatty eyelid. The operculum is smooth and without streaks. The gill arches carry a thin and elongated gill comb.
The mouth is broad and terminal, with the lower jaw slightly prominent. There are no teeth on the jaws, while they are found, thin and grouped, on the palatine.
The single dorsal fin is short and moved forward. The anal has its first three single rays and the last two prolonged and the tail carries on each side of the basal part, two large lanceolate, transparent scales converging towards the caudal fork. The ventral ones are short and carry a small lanceolate scale to the posterior junction. The pectorals are short and sickle-shaped.
The color of the back is blue; flanks and belly silver white. Between the blue of the back and the silver white of the sides there is a golden stripe (it fades after death). The tip of the muzzle is blackish and a spot is also noted at the upper corner of the operculum; the cheeks are silvery.
The membranes of the fins are pale yellow and the rays grayish. On the longer rays of the pectorals and in the interradial membrane there is a fine black dot. The tip of the caudal is blackish.

Biology –
The Sardinella aurita is a pelagic and gregarious species that frequents waters that do not drop below 18 °. The reproduction of this fish occurs in the summer months.

Ecological Role –
The Round sardinella is a fish that feeds on plankton in general, it is very voracious and attacks anything that moves within its range.
In the Italian seas it is abundant in Sicily, common in the Ionian Sea. Less present in the Adriatic and Tyrrhenian. Absent in the northern Adriatic.
This fish is caught with the same tools used for sardines and anchovies but, unlike these two species, it takes both natural and artificial baits, especially those used to fish for mackerel and horse mackerel. Trolling is also possible. It is often used as a bait because its meat, rich in oil, is much less good than that of the sardine.
It has good flesh, but with many thorns and in the Mediterranean it reaches the size of 15-23cm with spikes of over 30.
The Sardinella aurita plays an important ecological role in the Mediterranean food chain and is prey to many larger fish such as tuna, swordfish and imperial garfish.