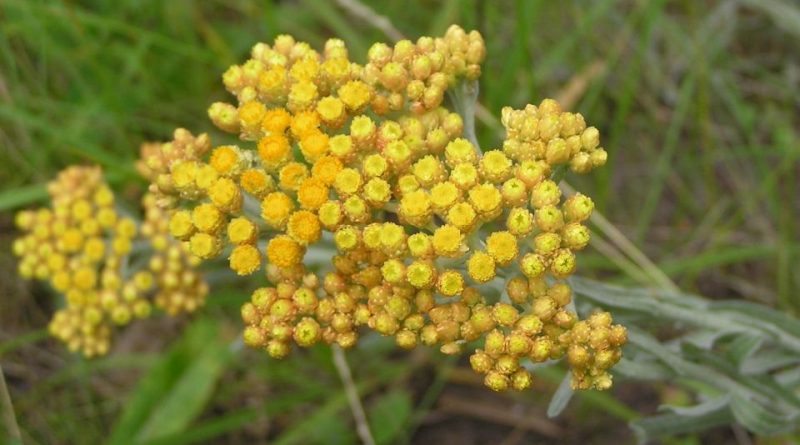 Etymology –
The term Helichrysum comes from the Greek ἥλιος hélios the sun and from χρυσόϛ chrysós oro: referring to the golden yellow color of the flowers of many species belonging to this genus.
The specific arenarium epithet is linked to its ordinary growth environment and therefore connected to sand, sand, sand.

Geographic Distribution and Habitat –
Helichrysum arenarium is a plant native to Europe, Central Asia and China and present in Europe. It is found mostly in eastern France up to Denmark and in the mountains of Uzbekistan on sandy grasslands and moors. It is also widely found on the Dalmatian coast in Croatia, where locals collect and sell it regularly throughout the summer (local Mediterranean climate permitting even until September and October).
Its habitat is that of dry sandy places, moors, dunes, pine forests. etc.. 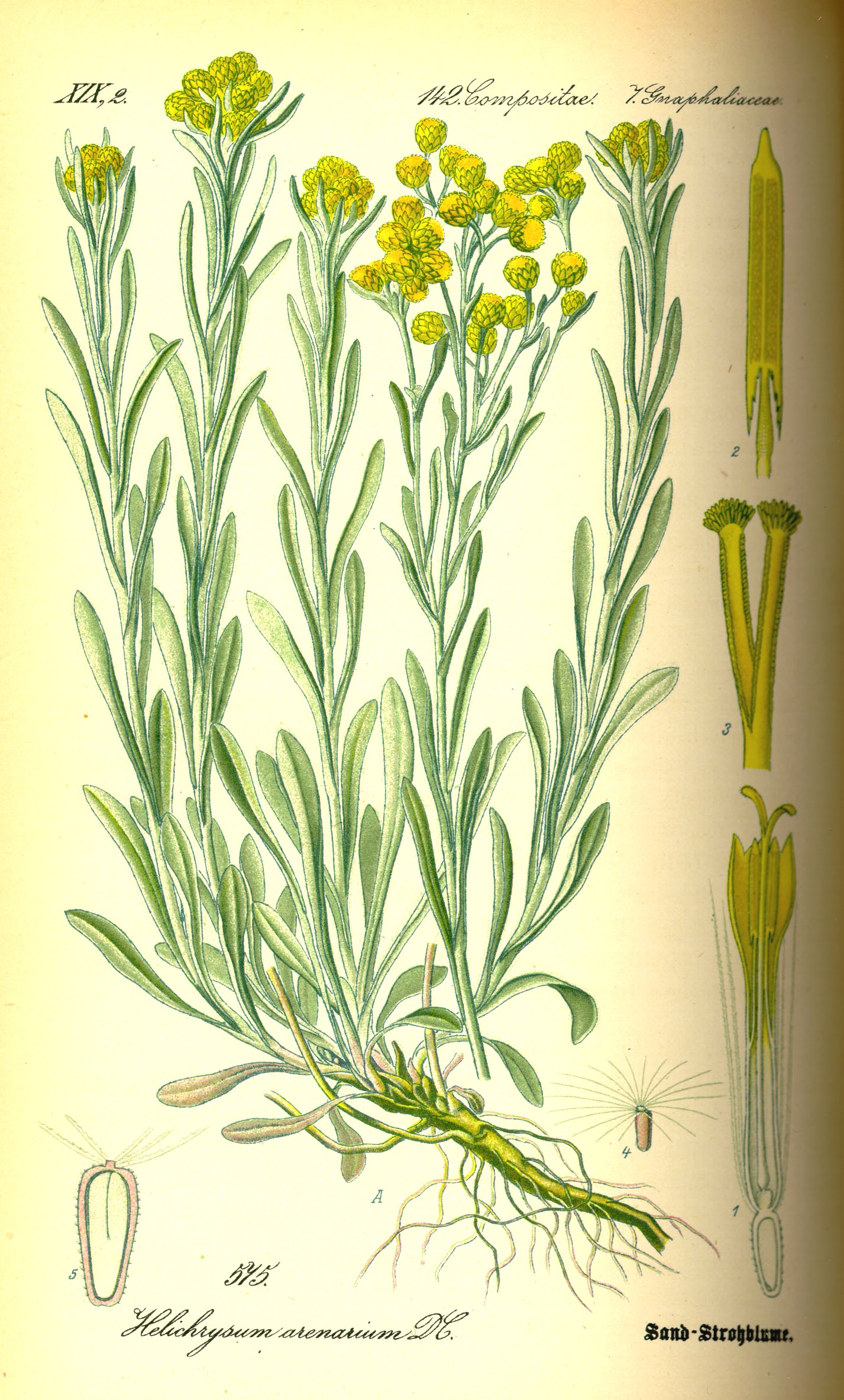 Description –
Helichrysum arenarium is a perennial herbaceous plant that grows to an average height of 0.3 m.
The leaves are flat, with the lower ones elliptical in shape, while the upper ones are linear; these are woolly on both sides.
The flower heads are freely arranged, in a shape that is a cross between umbel and panicle. The individual flowers are bright golden yellow and 3 to 4 mm wide.
The fruit is an oblong achene with a pappus.

Cultivation –
Helichrysum arenarium is a perennial plant that is harvested in its natural state for local use as a medicine.
This plant can be easily cultivated but requires a sheltered position, in well-drained soils and in a sunny position.
The plant is often grown for its flowers which are widely used as decoration and in wreaths, etc.
Propagation can take place by seed which must be sown in the late winter / early spring period in the greenhouse. The seed usually germinates in 2 – 3 weeks at 20 ° C. the individual plants are then transplanted into their permanent positions in the period of late spring or early summer, after the last frosts foreseen.

Customs and Traditions –
Helichrysum arenarium is a plant similar to Helichrysum stoechas.
Helichrysum arenarium is a plant widely used for the extraction of essential oils. Its flowers have a long tradition in European ethno medicine as a cholagogue, choleretic, hepatoprotective and detoxifying herbal medicine. The flowers are rich in phenolic compounds including flavonoids, chalcones, phenolic acids, coumarins and pyrones. In addition to polyphenols, other compounds such as sterols, lignans and glycosides of aromatic compounds have also been isolated from this plant. Most authors confirm that the most important group of compounds responsible for biological activities are flavonoids. In addition, significant activities of naringenin, one of the main flavonoids of Helichrysum arenarium, have been reported. However, there are no clinical data on the analysis of extracts or preparations based on this plant.
Although Helichrysum arenarium is well known in phytotherapy for its potential in the treatment of gallbladder disease and is classified as an endangered species in a number of European countries, very little data on its cultivation are available in the literature.