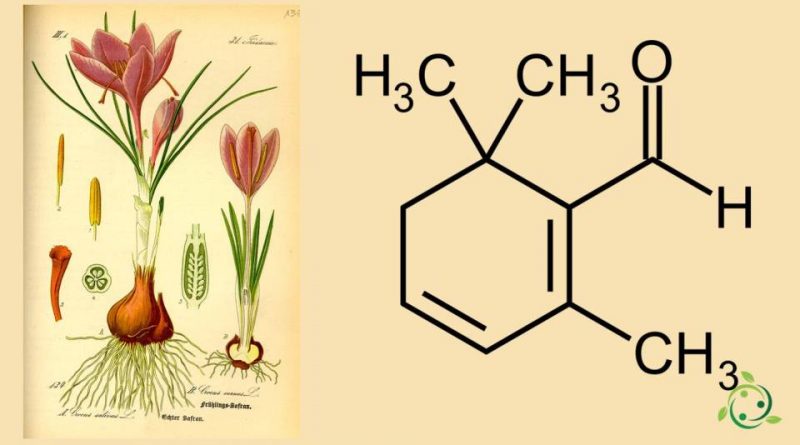 Safranal, whose term in the official IUPAC nomenclature is: 2,6,6-trimethylcyclohexa-1,3-diene-1-carbaldehyde is an organic compound of plant origin.
Safranal has a crude molecular formula: C10H14O and is the constituent mainly responsible for the aroma of saffron.
Safranal, in addition to being an organic compound isolated from saffron, the spice made up of the stigmas of crocus flowers (Crocus sativus L.), is present in many other plants such as:
– Camellia sinensis (L.) Kuntze;
– Ficus carica L .;
– Cuminum cyminum L .;
– Citrus limon (L.) Osbeck;
– and others.
Biochemically it is believed that safranal is a degradation product of the carotenoid zeaxanthin via the picrocrocin intermediate.
Safranal is an effective anticonvulsant in animals; has been shown to act as a GABAA receptor agonist.

Safranal also shows high antioxidant and free radical elimination activity, together with cytotoxicity towards tumor cells in vitro.
One of its anticancer mechanisms of action is that of interrupting the normal assembly dynamics of cellular microtubules.
Furthermore, safranal has been shown to have antidepressant properties in animals and in pilot studies in humans.