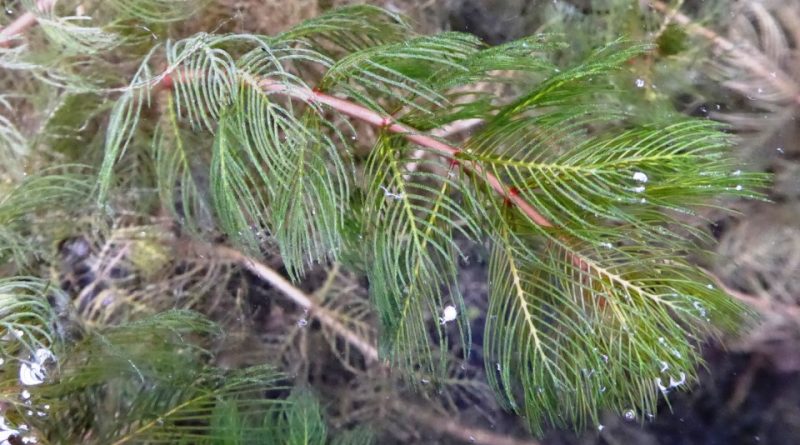 The Eurasian watermilfoil or spiked water-milfoil (Myriophyllum spicatum L.) is a herbaceous species belonging to the Haloragaceae family.

Geographic Distribution and Habitat –
Myriophyllum spicatum is a plant native to the Eurasian and African continents and with a basically cosmopolitan spread, present in North America, Europe, Asia, Australia and Africa. This plant is present in almost all regions of Italy (missing in Valle d’Aosta and Molise).
Its habitat is that of stagnant or slowly flowing waters, quite rich in nutrients, from sea level to the lower mountain belt. 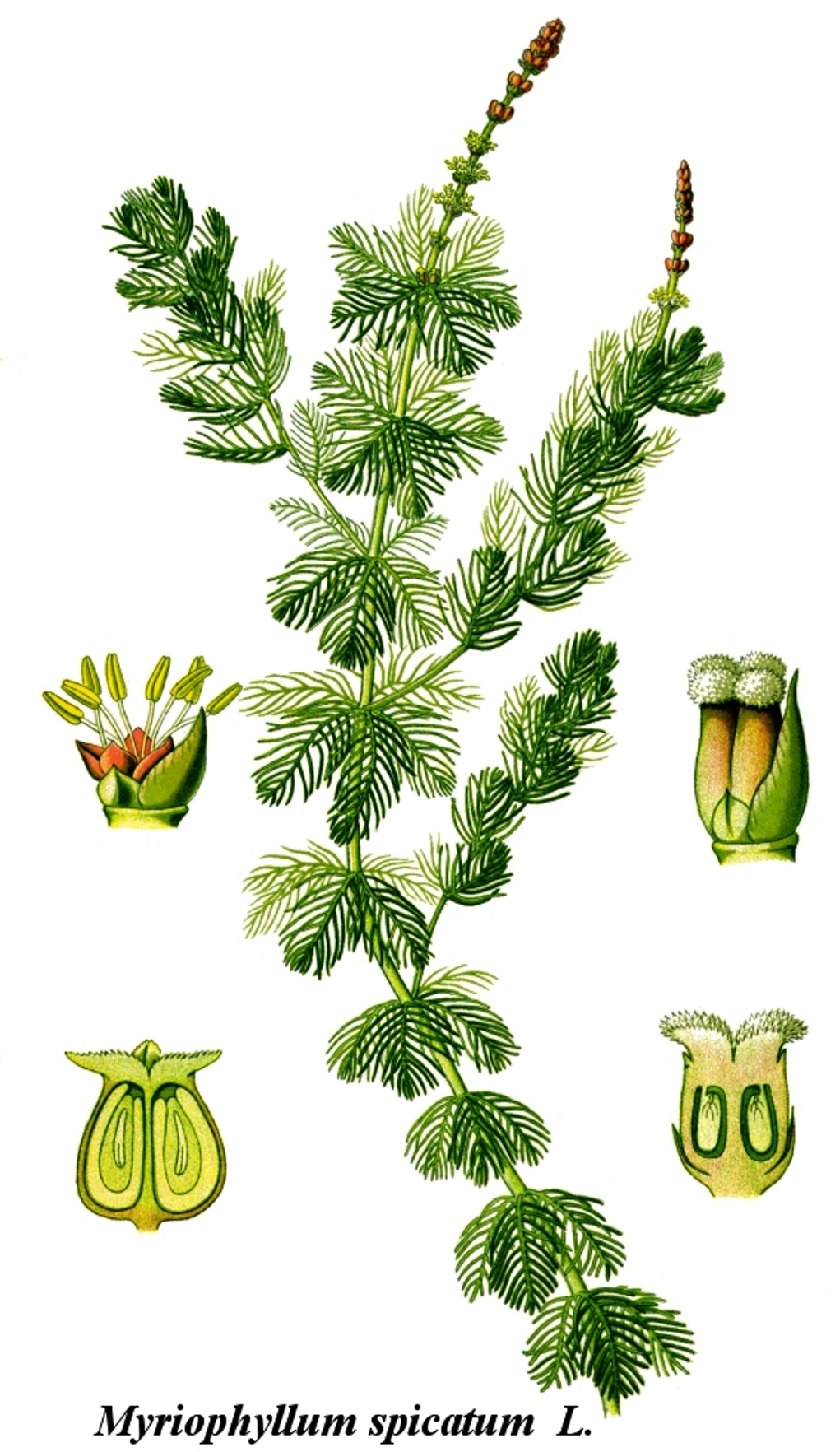 Description –
Myriophyllum spicatum is a perennial plant with thin stems up to 250 centimeters long.
The submerged leaves (usually between 15 and 35 mm in length) are carried in pinnate eddies of four, with numerous filiform leaflets about 4-13 mm long.
The plants are monoecious with flowers produced in the axils of the leaves (the male flower is above the female one) on a 5–15 cm long spike held vertically above the surface of the water; each flower is inconspicuous, red-orange, 4-6 mm long.

Cultivation –
The Eurasian watermilfoil is a plant that requires a sandy substrate, rich in decaying organic matter, in full sun. Plants overwinter as dormant buds at the bottom of ponds.
The plant can reproduce by seed but this is most likely of limited germination, especially if it becomes dry, so it is best to sow as soon as it is mature in a cold greenhouse if possible. Otherwise it is recommended to store the seed in a cool place in a jar of water and sow in the spring and then transplant the seedlings when they are large enough to handle.
The plant also reproduces vegetatively through the rooting fragments of the stems and can become invasive, forming very extensive immersed grasslands.
The cuttings can be inserted directly into the pond soil at any time during the growing season.

Customs and Traditions –
Myriophyllum spicatum is an oxygenating aquatic plant that lives completely immersed in water from 30 to 300 cm, the submerged leaves in addition to the filter function offer shelter to the fry of fish and aquatic insects. This plant is able to keep the water of the place where it grows clean and oxygenated.
Furthermore, in some areas it is harvested in its natural state as food and medicinal use.
The roots of this plant are consumed, both raw and cooked, and were a very popular food for several Indian tribes native to North America.
For medicinal use, the plant has emollient and febrifugal properties.
In lakes or other aquatic areas where native aquatic plants are not well established, the plant can spread rapidly.
The dense growth of this plant can also negatively impact fishing by creating microhabitats for young fish and obstructing space for larger fish, ultimately disrupting normal feeding patterns. Due to the plant’s inability to provide the same microhabitat for invertebrates as native aquatic plant species, areas densely populated with this species create an ecosystem with fewer food sources for surrounding fish.
Intensive growth of Myriophyllum spicatum can also create hypoxic zones by blocking the sun’s penetration into native aquatic vegetation preventing normal photosynthesis.
Myriophyllum spicatum hybridizes with Myriophyllum sibiricum becoming invasive also in North America. This hybridization has been observed in the upper midwestern United States (Indiana, Minnesota, Michigan, Wisconsin) and northwestern (Idaho, Washington).
Biological control systems have been put in place for this plant; among these we remember the Acentria ephemerella moth which feeds on and damages this plant.
Even an insect, Euhrychiopsis lecontei was used as a biocontrol. Another method for biocontrol is grass carp, (one of the Asian carp species) which has been reared as sterile, is sometimes released into affected areas, as these fish feed mainly on aquatic plants and have been shown to be effective in controlling the diffusion. However, carp prefers many native species to this plant, so it will usually decimate these species before acting on Myriophyllum spicatum.
One of the methods of spreading this plant is caused by boats. Effective methods to mitigate this spread are visual inspections with subsequent manual removal or pressure washing after removal from the vessel.
From a biochemical point of view it should be remembered that Myriophyllum spicatum produces ellagic, gallic and pyrogallic acids and (+) – catechin, allelopathic polyphenols that inhibit the growth of the blue-green alga Microcystis aeruginosa.

Preparation Method –
Myriophyllum spicatum is a plant with good oxygenating and water purification capacities, provided that it does not become invasive.
This plant has had, especially in the past, also food and medicinal uses. At one time several native Indian tribes in North America consumed the roots, both raw and cooked.
Also for medicinal use the plant is used for its emollient and febrifugal properties.