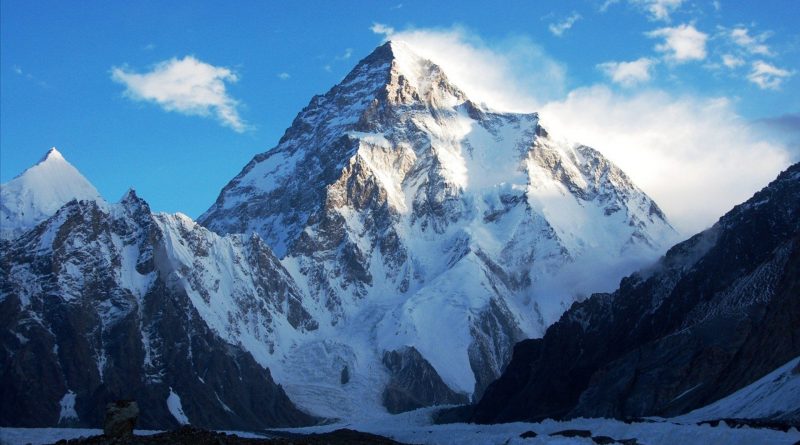 K2 which is the abbreviation of Karakorum 2, also known as Mount Godwin-Austen, ChogoRi (Balti language) or Dapsang, is the second highest peak on Earth after Everest.
K2 has an altitude of 8,609 meters and is located in the Karakoram sub-range, on the border between the part of Kashmir controlled by Pakistan and the Tashkurgan Autonomous Province of Tashkurgan of Xinjiang, China.
The name K2 was assigned to it by Colonel Thomas George Montgomerie, a member of the group led by the English geographer Henry Haversham Godwin-Austen, who carried out the first surveys in 1856.
In this regard, a particular anecdote is cited. The “2” was actually born from an error in measuring the height of the summit: as K1 was initially indicated the Masherbrum, which instead is considerably lower, but by pure coincidence the number “2” corresponded to the position of the mountain in the list of highest peaks in the world, and this justified its maintenance even later.
In the area around the Karakorum, where K2 rises, live different peoples of different ethnic groups and cultures, united by living for centuries in extreme environments in subsistence economies of agricultural and pastoralism: Balti, Hunzakut, Kirghisi, Wakhi.
From the very first expeditions, the help of the locals as porters was essential; on the other hand, the economic well-being deriving from mountaineering activities in western countries has significantly affected the standard of living of the residents.
K2 boasts a sad record: due to its mountaineering difficulty and high mortality (the ratio between total victims and mountaineers who reached the summit is 1 to 4) it is also known as the Wild Mountain. Among the eight thousand it has the third highest climbing death rate after Annapurna and Nanga Parbat.
This derives from the sum of several factors such as the extreme steepness of all its slopes, the constant presence of very demanding and dangerous climbing sections and mountaineering passages, and the almost total absence of suitable places for a field.
Furthermore, K2 holds another record which further testifies to its difficulty; in fact, in January 2021, it was the last 8,000 to have been climbed in winter: by way of comparison, 41 years after Everest and 5 after Nanga Parbat that season.
The top of K2 was reached for the first time by Achille Compagnoni and Lino Lacedelli on July 31, 1954, within the Italian expedition led by Ardito Desio. This is why it is also known as “The mountain of the Italians”.

Flora –
The morphological and climatic harshness of K2 are not only an obstacle for climbers to climb but also for the life of plant and animal species.
Although the areas around K2, at much lower altitudes, are rich in floristic biodiversity, on this mountain there are only a few species that adapt to these extreme conditions and that can survive on slopes and slopes.
The flora is completely absent once you reach the areas close to the summit and obviously on the summit itself.
At the heights to which Mount K2 reaches, there is no type of exchange of matter or energy between different living beings. We have only found remains of glaciers and high rocks, so we could say that the abiotic environment predominates.
Only mosses, lichens and other low plants that grow among the rocks survive. The heights to which they grow are considerable but do not reach the highest part.

Fauna –
As for the fauna, the areas below K2 are a precious refuge for endangered species: the snow leopard, the Markhor, the Marco Polo sheep, the flies, the Himalayan lynx, the blue sheep, the brown bear, the Indian wolf and Himalayan ibex.
As you climb the slopes of K2, the populations of animals become more and more sparse, only some birds attend higher altitudes. However, it comes from an altitude where there are not enough basic nutrients from primary producers to help establish a community of living things.