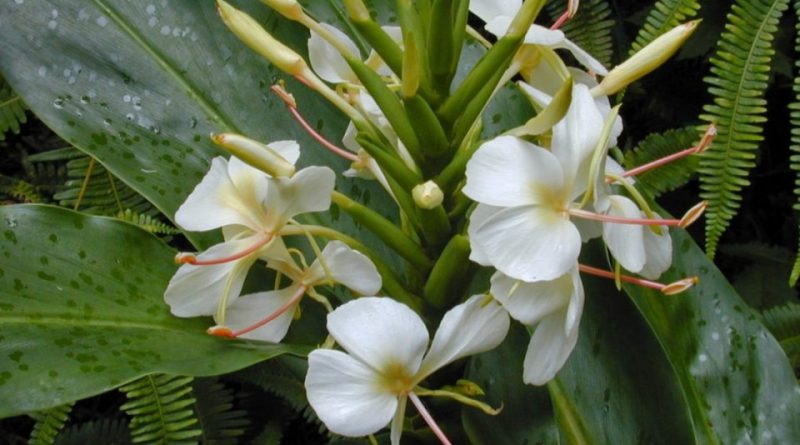 Etymology –
The term Hedychium comes from the Greek ἠδύς hedýs sweet, pleasant and from χιών chión neve.
The specific epithet coronarium comes from coróna corona, garland: suitable for composing garlands or with organs arranged in a crown.

Geographic Distribution and Habitat –
Hedychium coronarium is a plant native to the Himalayan region of Nepal and India where it is known as Dolan champa (दोलन चम्पा) in Hindi, Takhellei angouba in Manipuri, Sontaka in Marathi and Suruli Sugandhi in Kannada.
This plant is present in East Asia: China, India, Bhutan, Nepal, Sri Lanka, Myanmar, Thailand, Vietnam, Malaysia, Indonesia and Australia.
This plant was then introduced to Brazil in the period of slavery by African deportees who used its leaves as a mattress and is now so common that it is considered a weed.
It is a common plant in farmers’ gardens and is also found in the wild in the Sierra del Rosario in the province of Pinar del Río, in the Sierra de Escambray in the Province of Cienfuegos and in the Sierra Maestra.
The plant is also present in Cuba.
Its habitat is that of wetlands along streams, in marshy areas, in open wetlands and on the edge of shaded secondary forests, at altitudes from sea level up to 2,500 meters. 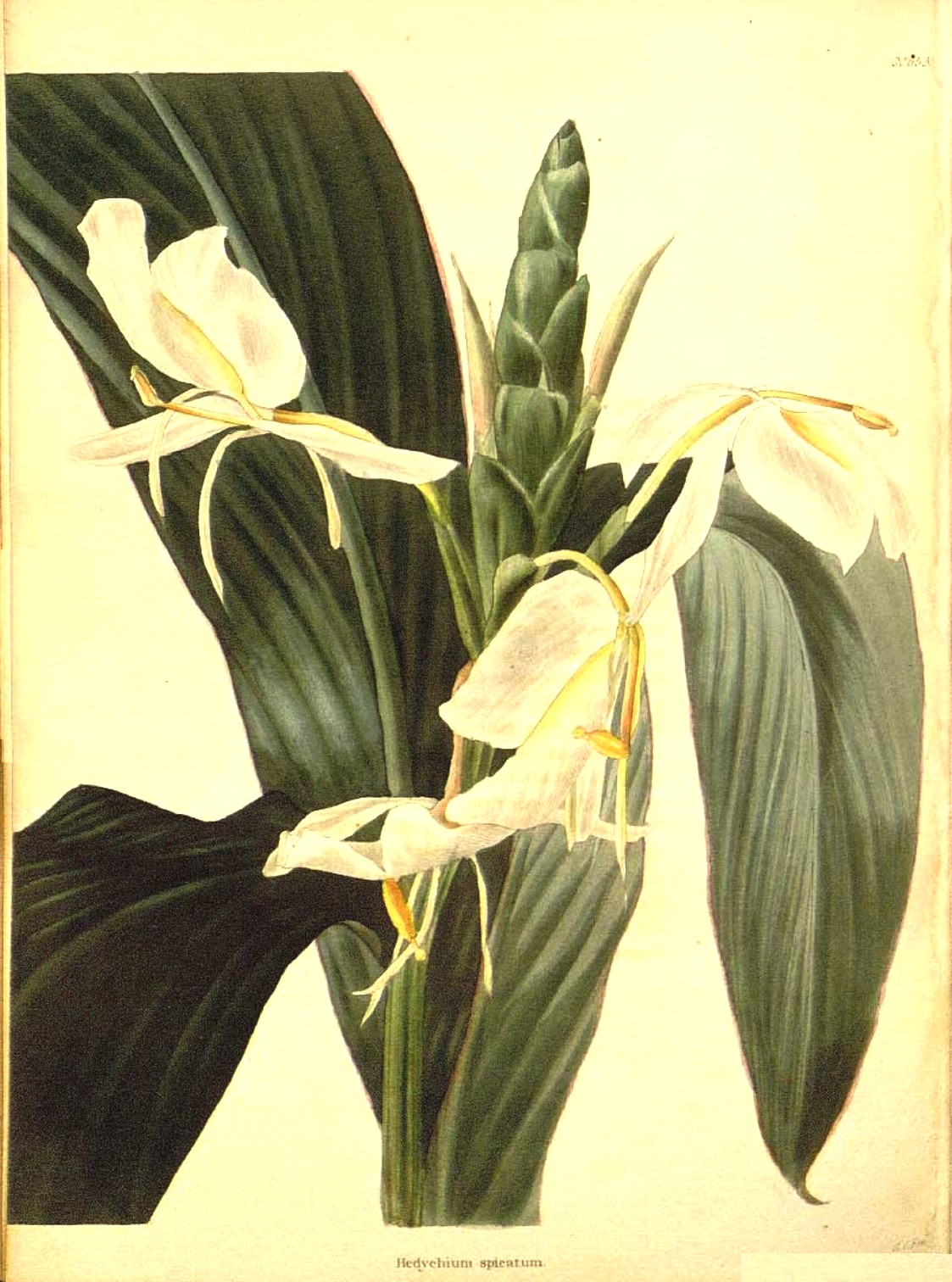 Description –
Hedychium coronarium is a robust, strongly aromatic perennial that grows from 1 to 2.5 meters in height from a fleshy rhizome of 25-50 mm in diameter.
The leaves are large, oblong to lanceolate, 16 – 60 cm long and 5 – 10 cm broad.
The very fragrant, candid white flowers are hermaphroditic, strongly irregular, composed of a tubular calyx and a tubular corolla. There are three stamens, two of which are sterile joined together. The ovary is inferior.
The flowers are gathered in inflorescences in which the large bracts stand out, arranged in a spiral.
The plant blooms during the summer.

Cultivation –
Hedychium coronarium is a plant of subtropical and tropical regions, not very resistant to cold, tolerating short-term temperatures that drop to about -2 ° C.
This plant requires rich, moist soil and a sunny or partial shade location.
It can grow in shallow water and often escapes cultivation and naturalizes. These plants can spread considerably by means of their rhizomes to form dense vegetation which can be quite difficult to eradicate.
The plant propagates by seed which is best sown as soon as it is mature in a slightly shaded location in containers in a nursery. Germination is best at 18 ° C; when the seedlings are large enough to be handled, they should be placed in individual pots; the transplant must then be carried out when the root system and the plant are perfectly formed.
The plant can also propagate by division of tufts; in this case the individual tufts must be divided with a spade or a sharp knife, making sure that each division has a growing sprout. The larger clumps can be planted directly in their permanent locations, but it is best to repot the smaller portions and grow them until they are established and rooted well.
Propagation by tuber is the easiest and this must be done by placing these in small holes, covered and immediately watered.

Preparation Method –
The fragrance of Hedychium coronarium is usually extracted by steam distillation.
For medicinal uses, the ground rhizome is used as a febrifuge; a decoction is also prepared to treat pain in the chest and arms.
From the basal part of the stem a decoction is obtained which is used for gargling in the treatment of tonsillitis or, alternatively, a part of the stem can be chewed.
An infusion is prepared from the leaves which is used to treat abdominal disorders. Furthermore, this plant, together with Lantana camara, is used as a febrifuge.
Boiled leaves are applied to stiff and aching joints.