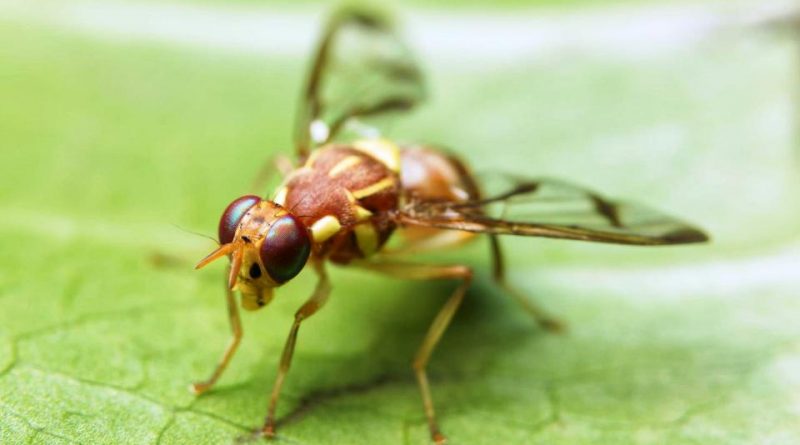 The fruit fly (Drosophila melanogaster Meigen, 1830) is an insect belonging to the Drosophilidae family.

Geographic Distribution and Habitat –
The Drosophila lives in all places where plant substances are present (in homes, therefore, especially where fruit and vegetables are stored) as it feeds on plant substances of all kinds, especially if in a state of decomposition, and on treated substances ( fruit, vegetables, wine). The larvae feed mainly on the microorganisms (bacteria, yeasts, fungi) present in the aforementioned products.

Morphology –
Drosophila melanogaster is an insect that in the adult or image stage has brick-red compound eyes. This color derives from the presence of 2 pigments: Xanthommatin of brown color and Drosopterina, red. The body is yellow-brown with some black transversal rings on the abdomen, from these rings derives the scientific name melanogaster (from the Greek “melanos”, black and “gaster”, belly).
Sexual dimorphism is present with females being 2.5mm long, while males are somewhat shorter and the terminal part of their body is darker. The main difference between the two sexes (easily observable under a microscope) is the tuft of small hairs that surrounds the anus and the genitals of the male.
The egg is oval-shaped (about 0.5 x 0.2 mm) yellowish white with filiform extensions.
The larva is a headless and footless worm, 5 to 6 mm long in the final stage.
The chrysalis is 3 to 4 mm long with anterior extensions (the true chrysalis is located inside the envelope formed by the last membrane of the larva).
The wings of a fly like Drosophila can flap up to 250 times per second. The flight is essentially composed of long linear sections, interspersed with rapid changes of direction called saccades. During these “turns”, it can rotate 90 degrees in less than 50 milliseconds.

Attitude and Life Cycle –
Females of Drosophila melanogaster can lay up to 600 eggs within fruit or other organic materials.
The eggs hatch 24 hours after laying.
The larvae that emerge grow for 5 days, in which they use microorganisms that decompose the fruit and the sugars of the fruit itself to feed. Subsequently the larva turns into a pupa, spending another 5 days consuming the accumulated food to carry out a metamorphosis, at the end of which the adult insect emerges.
The females mate about 12 hours after the metamorphosis, accumulating the sperm in some sacs, using it a posteriori to fertilize the eggs.
The male seminal fluid has two effects on the female: the first is to regulate the percentage of eggs laid; the second is to lower sexual desire in the female and thus possibly prevent mating with another male. Nevertheless, the same sperm also contributes to undermine the health of the female by lowering her lifespan.
The cycle lasts a few weeks and varies according to the ambient temperature.

Ecological Role –
Drosophila melanogaster normally develops in a temperature range of about 10 to 30 ° C. Hibernation occurs according to the type indoors or outdoors.
This spcie has a very developed sense of smell and is attracted to a large number of odors produced by intact or decaying nutrient substrates.
Humidity is an indispensable prerequisite for the development of the larvae, which even survive in liquids such as vinegar, wine or milk.
To contain the presence of this insect, the most important rules to be respected are cleaning and rapid elimination of waste, in order to eliminate as much as possible the sources of tempting odors. Prepared foodstuffs that cannot be stored in refrigerators or freezers must be protected by a transparent film or a very tightly meshed veil to prevent spawning.
The fruit fly is considered one of the most studied organisms in biological research, particularly in genetics and biological popularization.
The reasons are many:
– it is a small and easy insect to breed in the laboratory;
– has a short life cycle (about 2 weeks) and high productivity (600 embryos);
– mature larvae show polythene chromosomes in the salivary glands;
– they have only 4 pairs of chromosomes: 3 autosomes and 1 sexual;
– males do not show genetic recombinations, facilitating genetic studies;
– genetic transformation techniques have been available since 1987;
– the sequencing of its genome was completed in 1998;
– genetic mutations in the species are very frequent.