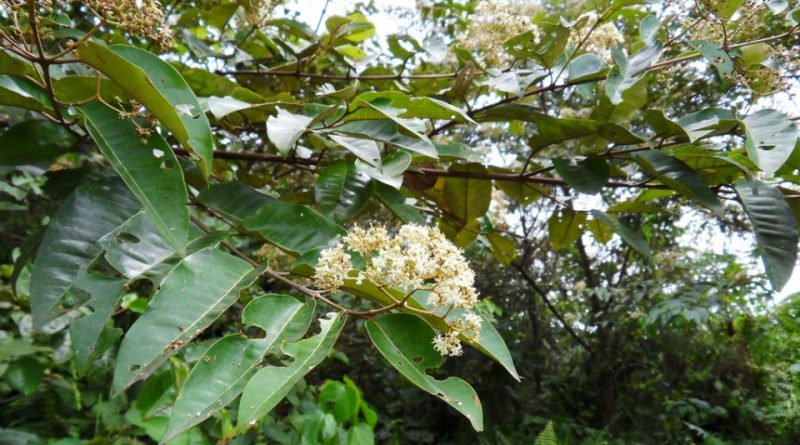 The Haronga (Harungana madagascariensis Lam. Ex Poir.) Is a shrub or arboreal species belonging to the Clusiaceae family.

Etymology –
The term Harungana comes from the name Haronga, the vernacular epithet of this plant.
The specific epithet madagascariensis comes from Madagascar, an island state located in the Indian Ocean, off the east coast of Africa, facing Mozambique.

Geographic Distribution and Habitat –
Haronga is a plant of tropical origin present in an area that includes Senegal, Sudan, Kenya, Angola, Zimbabwe, Mozambique and Madagascar.
Its habitat is that of lowland and mountain rainforest, marginal forest, savannah, clearings, locally abundant in the recent regrowth of secondary forests, from sea level to altitudes of 1,800 meters
The tree is often found near old villages in Gabon as a relic of previous crops. 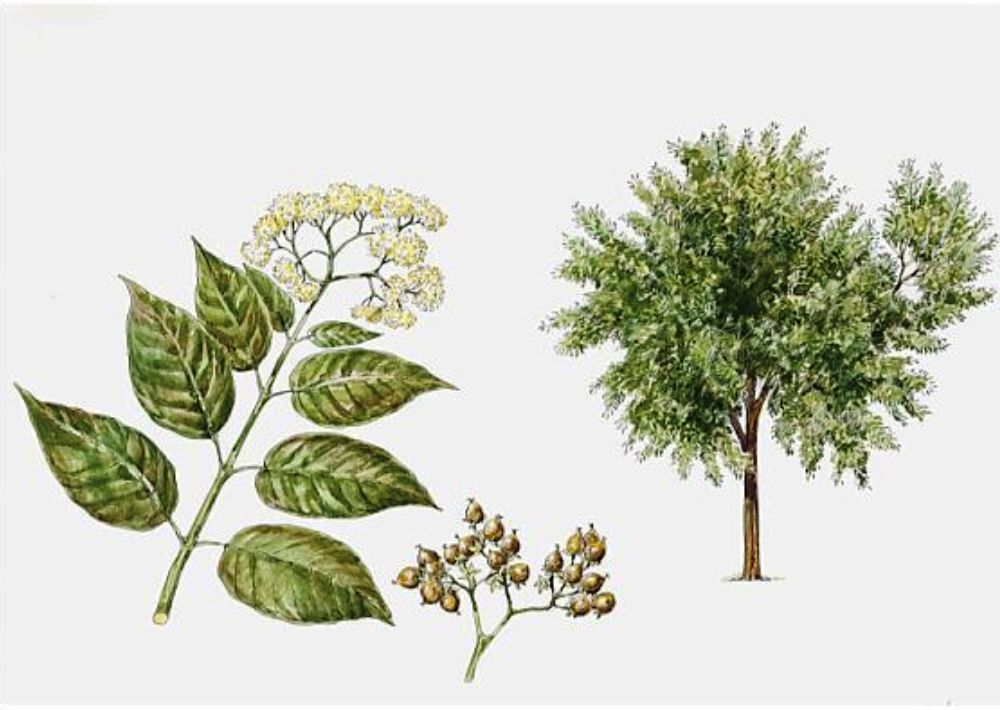 Description –
Haronga is a small bushy tree that grows from 4 to 7 meters in height to 25 meters.
The various weapons branch off from a cylindrical trunk.
The foliage takes on a golden green color.
The bark appears reddish brown in color and is vertically fissured. The scales are arranged vertically and can be easily flaked off. The tree can be immediately identified by its orange, almost fluorescent latex, which protrudes from damaged areas, from parts of bark detached from the stem or when the leaves come off or the branches break. Most of the surface of the tree is covered with starry hair.
The leaves are opposite, simple and ovate with leaf blades of 6-20 of 3-10 cm and of glossy consistency. The lower part of the leaf blade is covered with stellate hairs or scales. There are prominent veins and the lower surface is covered with a thick rusty down. There are also numerous lateral ribs. The young leaves are distinguished by the lower surface of a brown color. All the leaves have a tapered apex and a 1.5–3 cm long petiole.
The flowers are small, about 5-6 mm, bisexual. They have a white or cream color and smell of almond. The sepals are marked with dark brownish-red dots. The stamens are fused into five bundles, usually two or three stamens per bundle, although, occasionally, single stamens can also be found.
The ovary is characterized by dark glandular spots. The stems and the calyx are covered with short rusty hairs.
In southern Africa, flowering can be observed from January to April, and the fruiting season lasts until October. In Sierra Leone, the flowering of the plant begins in May and reaches its maximum in August and September, and then decreases towards December.
The fruits are small, about 3 mm in diameter, +/- globular. The fruit appears greenish-orange in color and turns red when ripe. The calyx is persistent and the fruits are marked by glandular points and streaks. The surface of the endocarp is hard, which makes cutting difficult.
Its cotyledons are broadly spathulated, the margins are marked by dark “oily” glands, the petioles relatively long and thin. At the tenth leaf stage: the “oily” glands appear very dark, visible in the transmitted light and on the underside of the leaf blade. The seeds are susceptible to insect attacks.

Cultivation –
Harungana madagascariensis is a species still occasionally planted as a medicinal plant and for obtaining gutta-percha, while it is also cultivated as a forest tree in tropical Africa.
This plant has a fast growth rate, especially when young, and is a species that grows best in areas where annual daytime temperatures are between 20 and 28 ° C, but can tolerate 12-36 ° C.
It prefers an average annual rainfall of between 1,500 and 2,500 mm, but tolerates between 1,000 and 3,500 mm.
It also requires a sunny location and grows well in a range of fertile soils and prefers a pH between 5.5 and 6.5, tolerating 5 – 7.5.
The plant tends to form dense thickets that exclude other species and can eventually become a permanent component of tropical rainforests, potentially making it a pest.
The tree responds well to the coppice.
Propagation can take place by seed, which has a short vitality and is best kept in sealed containers and sowed within two months of harvesting.

Customs and Traditions –
Harungana madagascariensis is a multipurpose plant, particularly appreciated for its medicinal uses and as a dye.
The fruits are eaten raw, have a sweet taste and are eaten as a snack, especially by children. The fruits are edible, although they are also gastric and slightly laxative, and in excess also emetic.
They are used in local cuisine and are fermented to produce a sort of cider which taken on an empty stomach can sometimes cause vomiting.
The sap from the bark is added to fermented drinks as a dye.
The medicinal use of this plant is important.
Haronga is widely used in Africa as a healing medicinal plant, especially for the treatment of skin disorders and bleeding conditions.
The bark, lymph and gum are particularly appreciated and considered aphrodisiac, astringent, oxytocic, emetic, emmenagogue, expectorant, haemostatic, purgative, haemostatic and vermifuge.
The analysis of the Nigerian material showed the presence of alkaloids in the bark. No alkaloids were found in the material from Madagascar, but abundant saponins were found in the leaves and the presence of flavones, leucoanthocyanins and tannins in the stem.
The yellow color has been attributed to a phenolic pigment called harunganin.
There are several related substances and an extract called “harongan” is being tested for stomach and pancreatic disorders.
Examination of Nigerian material for anti-biotic activities showed action on Gram + ve Sarcina lutea and Staphylococcus aureus, no action against Gram-ve organisms and no static fungal action.
Based on a theory, the yellow color of the gum evokes the use of the bark, roots or gum itself for the treatment of jaundice.
Also, comparing the expulsion of the gum to the flow of milk, the bark or root is used in a treatment to stimulate breast development.
The bark or gum is believed to have purgative properties. In Senegal, the bark and leaves are used for abdominal pain.
The resin of the flower is used for the treatment of colic, puerperal infections, roundworms and as a rubefacient.
Ash is applied to the areas of scabies.
The leaves and roots are also considered to be febrifugal and antimalarial and have been used to treat heart ailments. Leafy shoots are chewed with kola nut for the treatment of urethral secretions.
The roots are used to accelerate breast development in young women.
Other uses include agroforestry.
Harungana madagascariensis is a colonizing plant that can be used to forest the savannah after the destruction of vegetation by forest fires, thus offering protection and ground cover. It also invades the prairies thus accelerating the return to the secondary savannah.
The main interior produces a bright orange gum that turns red on exposure, but the innermost layer of bark and the outer layers of the wood produce a yellow sap from which a soft tint is obtained which is used to dye the velvet.
Rubbery latex is used in all areas to provide a yellow dye also for use on cloths, mats and many other items; the usual practice is to chop pieces of bark that are boiled in water with the fabrics to be dyed.
Latex is also used as a yellow paint.
The exudate thickened and a balm was recovered from it.
The inner bark is boiled in water and the resulting yellowish liquid is added to the pounded cassava to form a stiff, sticky paste. It is applied to freshly cooked pots while they are still hot as a kind of finish.
The bark is fibrous enough to be sometimes used in Ghana to tie roofs.
The bark and roots are chewed in place of toothpaste and are also used as a lipstick.
The wood ranges from red-orange to yellow and is particularly attractive. The wood is light and resistant to contact with the ground, even if in exposed positions it is subject to attack by insects; however it is widely used in the construction of huts for posts, joists, planks, etc.
The branches are cut into pieces suitable for use as hockey sticks.
Wood is used as a fuel and to produce coal by emitting a lot of heat; it is useful as a fuel in local metallurgy to soften metals.

Preparation Method –
Among the various preparations it is recalled that the lymph exuding from the inner bark is taken slightly heated as a purgative, while the water in which the bark has been boiled is used as a treatment for dysentery and is also given to children suffering from constipation and wind.
The sap washed from the bark taken from the east and west sides of the tree trunk (an ancient relic of sun worship?) Is used as a remedy for tapeworms, while the bark is also used as a vermifuge.
Resinous sap is applied externally to treat all types of skin ailments including leprosy, sores, itching, scabies, ringworm, crawling, mange, mycosis, etc., often after the affected area has been scarified to draw blood, such as example with the rough leaves of Ficus exasperata, the sandpaper tree.
Rubber is applied to cuts, including fresh circumcision wounds and ulcers. Dried gum is also used as a wound dressing. From the bark or root a decoction is prepared which is widely considered useful as a remedy for a number of bleeding disorders including hematuria, dysentery and hemorrhoids; as an emmenagogue and oxytocic for a range of gynecological conditions including placental delivery, miscarriage, dysmenorrhea, irregular or painful menstruation; cough with bloody sputum.
Both bark and gum are used for the treatment of breathing and chest difficulties; moreover a decoction is used for bronchial affections, cough and asthma.
Twigs, leaves and leaf buds find similar medicinal uses to bark and sap and are often used to treat the same type of conditions.