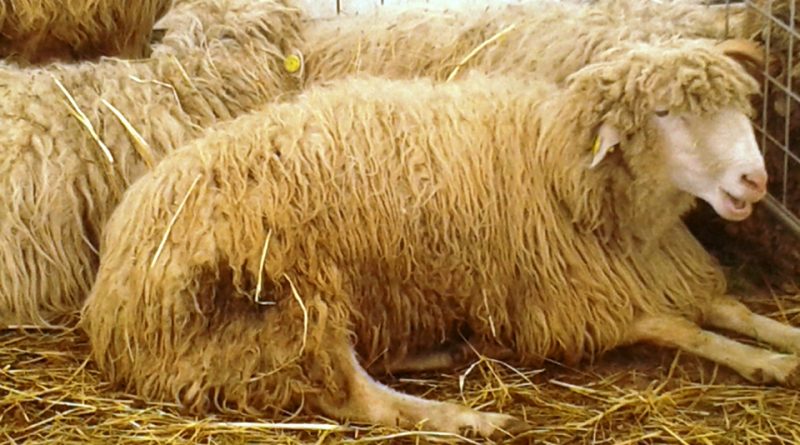 The Altamurana or Moscia delle Murge is a rustic Italian sheep breed (Ovis Linnaeus, 1758) bred in Puglia and Basilicata.

Geographic and Area Distribution –
The Atamurana is an Italian breed with a prevalent aptitude for milk production with an area of ​​origin in the Altamura (BA) area and widespread in Puglia (Bari, Foggia) and Basilicata (Matera, Potenza). It was once considered a triple aptitude breed (milk, meat and wool).
This breed, nicknamed, “Moscia” because of the little wrinkled and falling woolly filaments of its fleece, is believed to come from the sheep of the Asian or Syrian breed of Sanson (Ovis aries asiatica) and precisely from the Zackel stock.

Origins and History –
The history of the Altamurana breed comes from ancient times when the Murgia area was rich in sheep and goat flocks reared with the wild grazing method due to the extreme rockyness of the places and the poor fertility of the soil.
The Altamurana sheep is a very rustic indigenous breed, it has adapted to these environments over the centuries. The Altamurana is a medium-sized sheep with a triple aptitude (milk, wool, meat) much used in the past for dairy production while, in recent decades, it has been selected mainly for meat, in particular for crossbreeding with more productive breeds. , like the comisana and the leccese. Altamurana is particularly resistant to tick bites and therefore does not fall ill with piroplasmosis, a disease that quickly leads to the death of the affected sheep. The decline in the use of sheep’s wool for the production of mattresses, the lack of manpower willing to carry out the hard work of a shepherd, the transition, thanks to mechanization, to forms of agriculture with higher income, have determined in the last fifty years the decline of sheep and goat farming on the Murgia. In particular, the disappearance of the Altamurana breed was determined by the smaller size of the lambs at birth and by the slower growth rate compared to the other Apulian breeds; moreover, the Altamurana is characterized by generating only one lamb per birth and producing a scarce amount of milk. In the 80s of the last century in the Murgia area there were about 190,000 heads of Altamurana while, according to the latest estimates dating back to 2000, about 400 heads were raised, of which only 170 registered in the herd book, and therefore of pure Altamurana breed.

Morphology –
The Altamurana is an indigenous breed of medium size recognizable thanks to the white fleece and the elongated head.
The head is light, elongated, sometimes with short horns.
The ears are small horizontal with a tuft of wool on the forehead.
The back and the loins are straight, sloping and not wide rump, round and voluminous abdomen, long and thin tail, developed, globose udder.
The fleece is white, open, with pointed spikes, extended, covering the trunk, neck, base of the skull and tail.
The skin is thin, elastic, pinkish-white, small roundish spots of dark or grayish color on the face and lower parts of the limbs.
This breed has an average height at the withers of 71 cm for males and 65 cm for females, with an average weight of 53 kg for adult males and 39 kg for adult females.

Productive attitude –
The Altamurana is a breed with a prevalent aptitude for milk production. This breed has an average milk production of between 80 and 120 liters, with a fat content of 7.5% and a protein content of 6.5%.
In addition to the production of meat, they make a contribution of wool that is around 3 kg for rams and 2 kg for sheep.