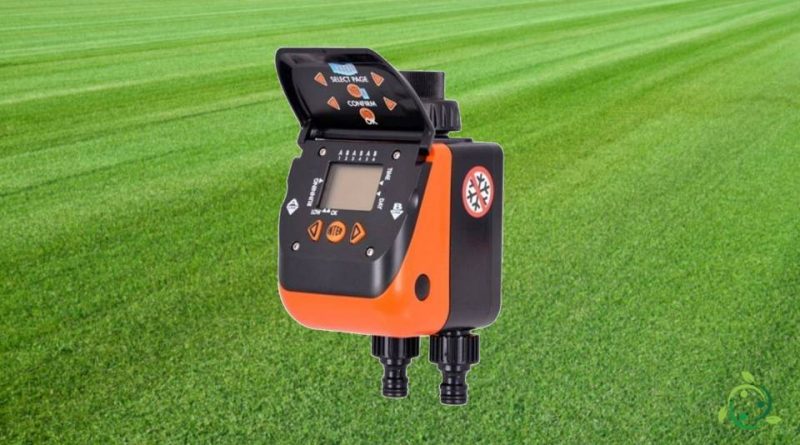 An irrigation timer or control unit is a mechanical or electronic device designed to automate the operation of an irrigation system.
Two important advantages are achieved with the timer:
– it avoids the need to manually activate the system and thus exclude any problems and oversights;
– you are sure to give the plants the right amount of water at the right time.
There are several models of irrigation timers that differ both in cost and in the availability of automation functions.
The choice is made, usually both for the type of irrigation that you want to automate and also for the number of sectors you want to automate as there are timers that can manage multiple irrigation lines at the same time.
Generally it can be used to irrigate a vegetable garden, a garden or simply a terrace with numerous potted plants, but also to irrigate small lawns or green areas.
The choice of a timer model for irrigation depends on the characteristics of the plumbing system and the size of the green area to be irrigated.
Generally these irrigation timers are used either for drip systems or sprinklers for small lawns or other green areas.
Another case in which the use of the timer may be useful is in irrigation systems by means of hoses and perforated pipes: these are two systems that make water consumption more efficient and in which irrigation will be necessary more frequently.
The usefulness of the timer is to be able to program one or more irrigation events without the need for human presence and according to well-defined and repeated times for all the days of the week that are deemed appropriate.

How to use –
The operation of a timer is quite simple; in it there is a solenoid valve that is activated by a low voltage signal, this, through the impulse, opens for a predetermined period of time, allowing the sprinklers to be powered.
Many of these timers work with a built-in battery; the timer is easily applied directly to the tap: the irrigation system hose is connected to the timer.
The use is very simple and requires the programming of the irrigation control unit which takes place using a special keypad and, as a rule, a display present in it.
In order to program correctly it will be sufficient to follow an enclosed instruction booklet, which the control units are equipped with at the time of purchase: you start by setting the time and day of the week in which you want to water and finally just set the duration of the irrigation and the days of the week in which you want it to take place with indication of the start and end time.